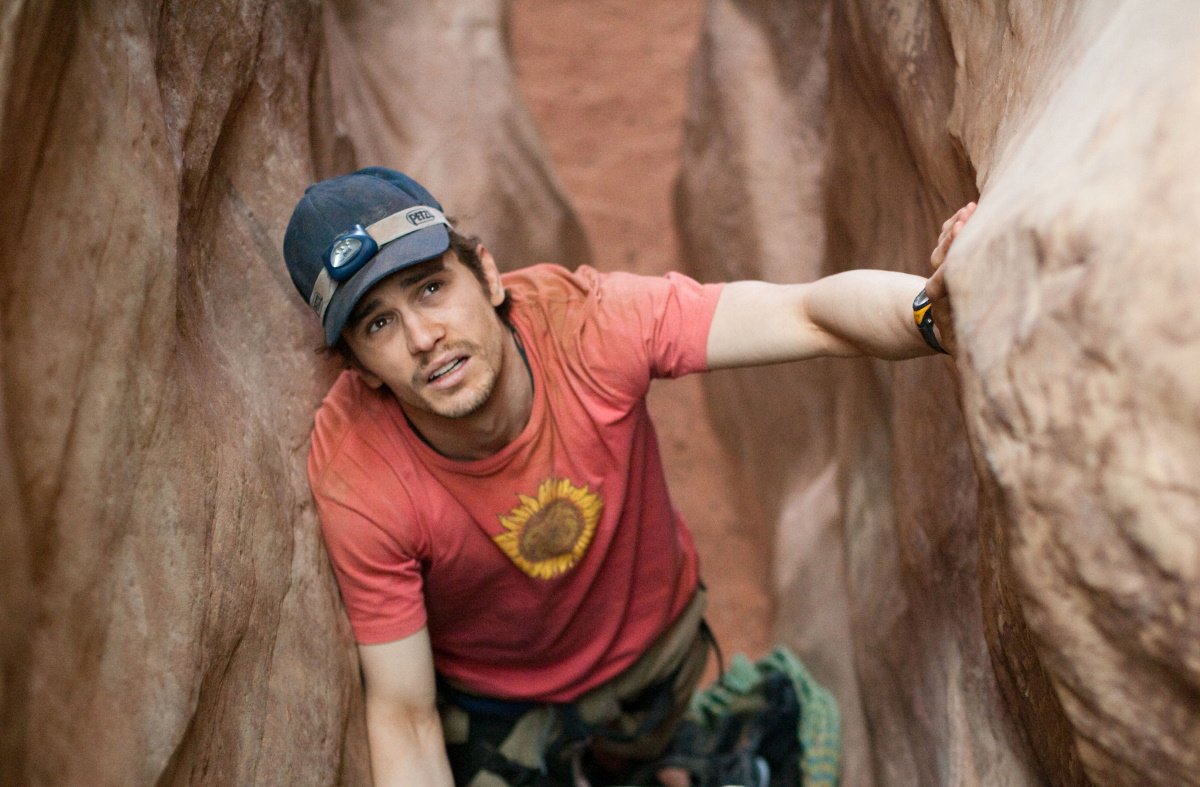 The true story of outdoorsman and hiker Aron Ralston, whose spontaneous solo trek in the desert almost killed him, made for a riveting memoir. But it was thought unfilmable, given that Aron ends up trapped and alone in a crevice, his arm pinned by a boulder and his existence suddenly reduced to a sliver of a world. There’s not a soul who knows he’s there.

James Franco plays Ralston in 127 Hours (2010), Danny Boyle’s film of his story. What Boyle and Franco offer isn’t so much a film as a cinema stunt, a technical exercise in making inherently uncinematic material interesting and compelling. Boyle and co-screenwriter Simon Beaufoy find interesting ways to open up an inherently internal experience

127 Hours is as much a character study as a survival thriller, the story of a man who isn’t alienated from the world so much as purposefully disconnected. He’s a smart and prepared outdoorsman, good at what he does and well-stocked with equipment and supplies. But his determination to be utterly self-sufficient and free, a man living for the moment without emotional ties to tether him, also leads him into his very predicament. In his arrogance, he never bothers to tell anyone where he was going. And once he realizes that he is truly alone, with no one on the way to save him, he starts to take stock of what his emotional distance has cost him.

Ralston’s ordeal became a major news story and he barnstormed the country to promote his best-selling memoir, so the climax is no surprise to many. It’s just old enough, however, that many others will come upon the film with no such knowledge so in the interest of spoilers, we’ll keep it under wraps. Just know that what could have been a gruesome or brutal sequence is handled respectfully and dramatically.

The subtext of emotional isolation and disconnection is somewhat contrived and not completely convincing but the lesson is heartfelt and the experience is vivid.

It was nominated for six Academy Awards, including best picture, actor (for James Franco), and adapted screenplay, and eight BAFTAs, and Franco won for best actor at the Film Independent Spirit Awards.

Leaves Hulu at the end of September. Add to My Stuff on Hulu

Also on Blu-ray and DVD and on SVOD through Amazon Video, iTunes, GooglePlay, Vudu and/or other services. Availability may vary by service.
127 Hours [Blu-ray]
127 Hours [DVD]

The DVD and Blu-ray releases feature engaged commentary by director Danny Boyle, producer Christian Colson and co-screenwriter Simon Beaufoy and deleted scenes. Exclusive to the Blu-ray release is the 35-minute “127 Hours: An Extraordinary View”, with lots of revealing behind-the-scenes footage and thoughtful interviews with Boyle and Franco, and “Search & Rescue,” a 15-minute documentary on Ralston’s escape featuring interviews with the Ralston and the search and rescue professionals who flew him out of the desert, plus a digital copy for portable media players.