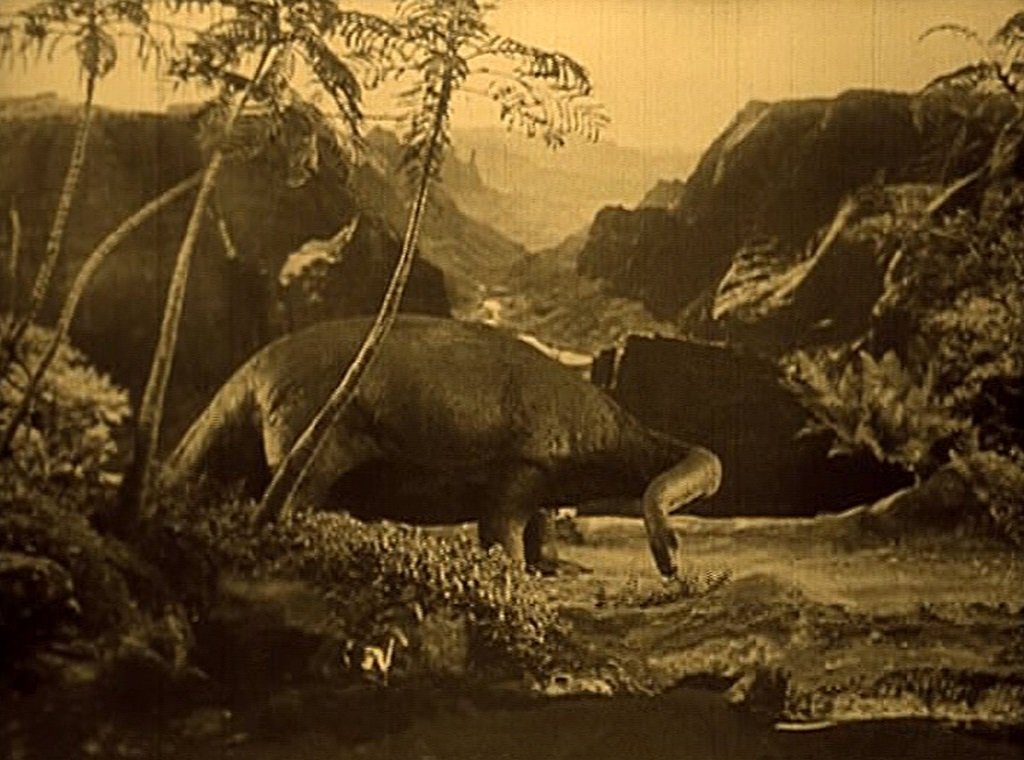 Every larger than life creature feature, from King Kong to Godzilla to Jurassic Park owes a debt to the original The Lost World (1925), the granddaddy of giant monster movies. Based on an adventure fantasy by Arthur Conan Doyle, it’s the story of a maverick scientist and explorer, Professor Challenger (Wallace Beery under a bushy beard), who reports on a land that time forgot on a plateau deep within the South American jungles. When what passes for the National Geographic society jeers his presentation, which is delivered with no evidence, gentleman adventurer and big game hunter Sir John Roxton (Lewis Stone) proposes a new expedition and volunteers to go along. The team is filled out with a somewhat elderly scientist (Arthur Hoyt), a reporter (Lloyd Hughes) representing the paper financing the trip, and the lovely Paula White (Bessie Love), whose father disappeared in that plateau on a previous trip.

The film is directed by Harry O. Hoyt but the star filmmaker here is Willis O’Brien, the stop-motion pioneer who built on his work here to create King Kong a few years later. The ostensible stars of the picture are all upstaged by Willis O’Brien’s dinosaurs, simple models brought to life with primitive stop motion animation and integrated with the actors through then-state of the art split screens and matte shots. Hardly realistic by any measure, they are nonetheless still a sight to behold, especially the lumbering brontosaurus which receives the most care from O’Brien, both foraging in his jungle and rampaging through the streets of London when Challenger returns with his proof. It essentially launched the special effects movie.

Previous versions of the film were incomplete (the history is outlined below), with much of the human drama cut down in favor of the creature footage and special effects spectacle. This new restoration fills out of the film, gives the narrative more of a human dimension and the actors more space to develop character and relationships. The charismatic Bessie Love, the film’s marquee star, benefits greatly from the expanded screen time, as does Stone, the mature world traveler whose affections for the younger Paula take a somewhat melancholy turn. The film now breathes and rolls out at a steadier pace. While it’s still missing some footage from the original cut, this feels like a full film.

The history of what happened to the original The Lost World is complicated (Serge Bromberg outlines it in greater detail in the disc’s accompanying booklet) but suffice it to say that it was bought and suppressed by RKO as they prepared King Kong. They bought up as many original prints as they could and pulled it from release, but did license a truncated version for a 16mm release for to private film collectors. The great film archivist David Shepard spent much of his life working to reconstruct and restore the film. After an incomplete reconstruction in 2003, he teamed up with French film archivist Serge Bromberg for a definitive version, or as definitive as can be given the existing material around the world. According to Bromberg, it is reconstructed from elements coming from 11 sources spanning archives and collectors across the globe, and it was in the final stages of completion when Shepard passed away in early 2017, making it one of his last restorations he shepherded to fruition. This release is dedicated to his memory.

The Blu-ray is mastered in 2K from this new restoration and the visual quality is mostly outstanding, though there are a few sections clearly from substandard sources, and the presentation slowed to a more accurate silent film speed. It’s the best this film has looked since the late 1920 and almost twice as long as the cut-down 1930 version. It features a new orchestral score composed and conducted by Robert Israel and audio commentary by filmmaker and film historian Nicholas Ciccone, who provides both production detail and background on the restoration.

Carried over from previous releases is a reel of outtakes from a 1925 original nitrate transfer of the film, the early Willis O’Brien short films R.F.D., 10,000 B.C. (1917), produced for the Edison Studio, The Ghost of Slumber Mountain (1918), in a newly restored edition, and the unfinished Creation (1930), all of which features O’Brien animated prehistoric creatures, and there’s a still gallery of promotion materials.

The accompanying booklet features essays on the film and on the restoration and notes on the score.

One of the most influential silent films of all time, F.W. Murnau’s The Last Laugh (Germany, 1924), a street-drama tragedy of an aging hotel porter who loses his job to a younger, more dashing man and suffers the humiliation of being demoted to washroom attendant, is a compendium of silent film techniques handled with a new sophistication. When the hearty, rather pompous Emil Jannings loses the dignified uniform of his station, he transforms into a scared little man scurrying through the shadows to hide his demotion from friends and family.

Murnau captures the humiliation and calamitous fallout from the demotion (he loses not just his self-respect, but the esteem of his neighbors and even his apartment) in haunting expressionist images that transforms the petty events into tragic melodrama. It seems a little extreme even for the genre but it’s never less than a harrowing subjective experience, even with the rather fanciful happy ending tacked on the end it. Most famously, Murnau throws the camera into motion—one of his most famous shots takes the viewers up an elevator, through the grand hotel lobby, and out the revolving glass door in a single smooth shot—and it hasn’t stopped moving since.

The new Blu-ray and DVD features a new 2K restoration of the film by the Friedrich-Wilhelm-Murnau-Stiftung and a newly-created musical score by the Berklee Silent Film Orchestra (I was at the world premiere performance of that score on a big screen restoration and it was fabulous), and audio commentary by film historian Noah Isenberg.

Carried over from earlier DVD release is the 2003 recording of Guiseppe Becce’s dramatic and lively original 1924 orchestral score, the 40-minute German documentary “The Making of The Last Laugh,” and a bonus DVD featuring the unrestored export version of the film (it’s much softer and more damaged) accompanied by Timothy Brock’s far moodier score, which fills the film with a sense of despair from the opening frames.