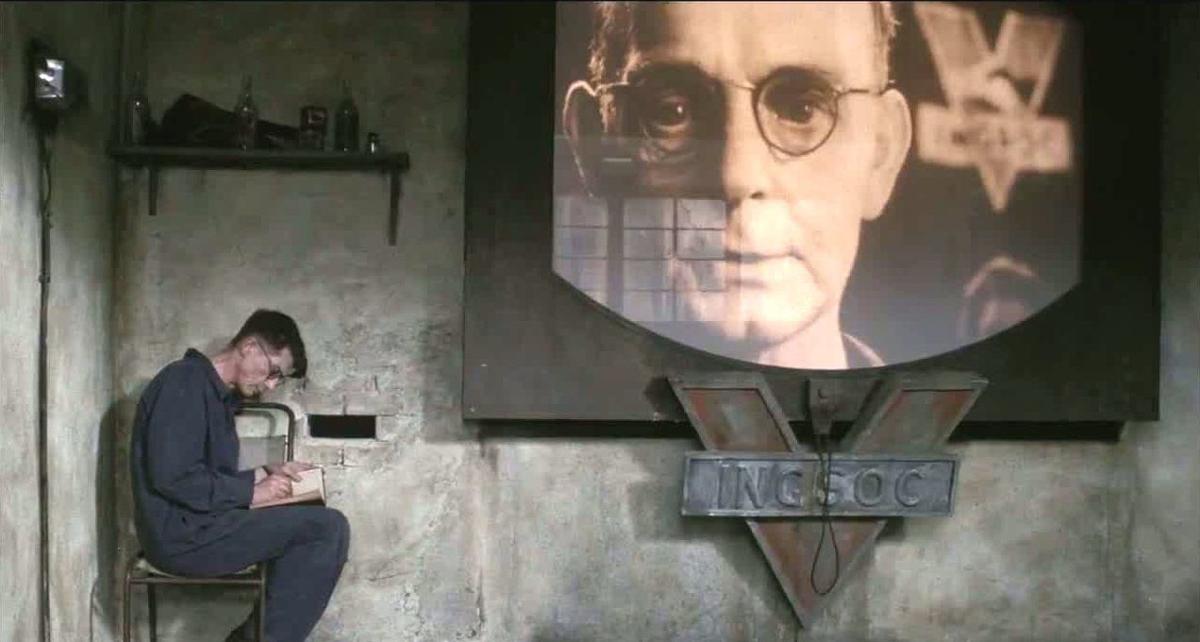 1984 (1984, R), Michael Radford’s film adaptation of George Orwell’s dystopian classic, is actually the second big screen version of the novel (the first version, produced in 1956, was withdrawn from circulation by the Orwell estate). It also has the distinction of being made and released in 1984.

John Hurt stars as Winston Smith, a shuffling, almost lifeless proletariat rewriting history to serve the purposes of the totalitarian government (“Big Brother”). In public he joins the dead-eyed, joyless citizens parroting the party line while enduring a life of propaganda broadcasts but he privately rebels, keeping a secret diary and engaging in a tender affair with Julia (Suzanna Hamilton). Both are forbidden activities.

Richard Burton (in his final screen role) is brilliant as the government interrogator O’Brien who uses torture and terror to break Smith and make him betray his own free will.

Faithful to both the story and the spirit of the novel, which Orwell wrote as a savage indictment of totalitarianism and Soviet Communism, the film offers a gray, grimy world of misery and privation; you can feel the cold damp of Winston’s shabby room and his emaciated frame and hacking cough suggest malnutrition. The only color comes when Winston and Julia leave the city for the green countryside, an idyll that only makes their lives look worse. In England, the palette and setting evoked life during World War II.

To contemporary American audiences, the dinghy buildings and retro-technology of dial phones, video screens, and pneumatic tubes echo Terry Gilliam’s Brazil, a colorful satire inspired by Orwell’s novel and released mere months after the debut of this film.

While Radford never fully captures the devastating ordeal of mental and physical torture of Orwell’s novel, it is an admirable effort and a fine film in its own right, and its presentation of language and propaganda used to manipulate citizens is as timely now as it was in both 1948 and 1984.

The great Roger Deakins is the cinematographer and it features original songs created for the film by Eurythmics (added against the wishes of director). The film was released on home video with both the original orchestral score by Dominic Muldowney and with a hybrid featuring the Eurythmics songs

Cyril Cusack, Gregor Fisher, and James Walker costar and Phyllis Logan is the voice of the TV announcer.

The Criterion Collection special edition Blu-ray and DVD releases presents a new 4K master with choice of two soundtracks (original orchestral score by Dominic Muldowney and hybrid featuring electronic music and songs by The Eurythmics) plus new interviews with the filmmakers and cast.