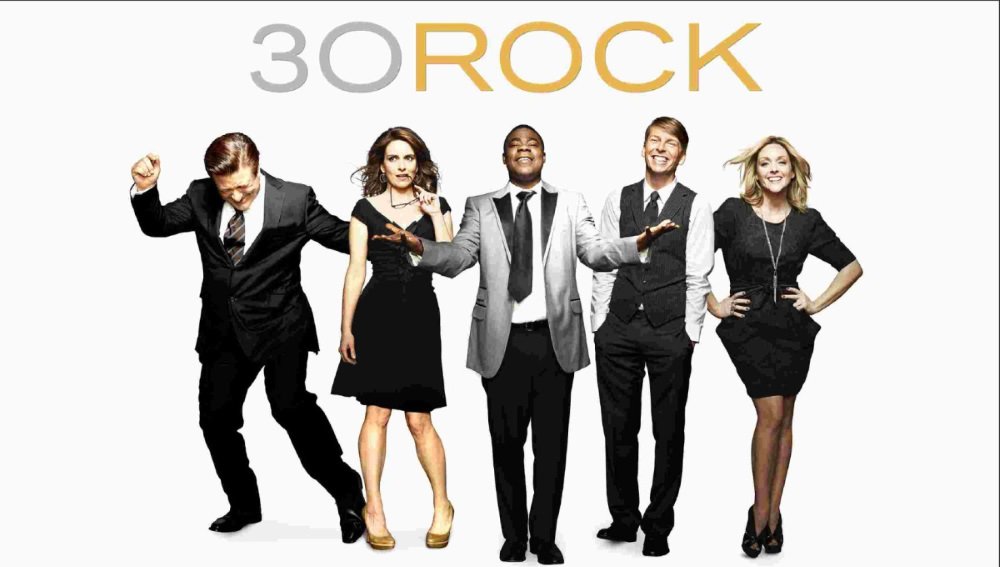 The 2006 TV season treated us to not one but two shows set backstage at a late-night comedy skit show. 30 Rock (2006-2013) was the funny one created by and starring Tina Fey, the former head writer of Saturday Night Live and host of the SNL “Weekend Update.” It was also the good one and ultimately the successful one, running seven seasons and winning the Emmy for Outstanding Comedy Series three years in a row (among its many, many awards).

Fey plays Liz Lemon, head writer of the fictional “The Girlie Show,” a femme-centric late-night skit comedy series that undergoes a sudden transformation under the velvet fist of her new boss Jack Donaghy (a pitch perfect Alec Baldwin), the Vice-President of East Coast Television and Microwave Oven programming (and the creator of the Tri-Fection Oven!). The first thing he does is hire former movie star and blissfully unhinged celebrity Tracy Jordan (Tracy Morgan) and rebrand the show as “TGS with Tracy Jordan,” which transforms the former headliner Jenna Maroney (Jane Krakowski) into a quivering mass of neurotic paranoia… which isn’t a whole lot different than her usual, obliviously self-absorbed state, merely turned up a couple of notches.

Fey is marvelous as the romantically challenged Lemon, more at home trading insults with her writing staff than going out on dates, and Alec Baldwin is, simply put, the funniest man on TV as the supremely confident executive determined to become Lemon’s mentor in all things corporate. Jack McBrayer almost steals the show from Baldwin as the perpetually sunny hick-in-the-city NBC page Kenneth, Scott Adsit, Judah Friedlander, Keith Powell, and John Lutz co-star as her staff, Katrina Bowen is the oblivious receptionist, and Rachel Dratch makes an appearance in almost every episode of the first season, always in a different role.

This show rocks. For seven seasons it was the funniest 22 minutes on TV. They made two live shows (which frankly aren’t as funny as the edited shows—that pacing and perfect timing is perfected in the post-production—but are still worth it for the brilliant casting of Julia Louise-Dreyfus as “Flashback Liz”) and packed a lot into the 13-episode final season. Busy with rapid-fire visual gags and non-sequiturs under normal circumstances, these final shows manage to bring almost every significant recurring character back for a final bow. Which they take to Jenna’s distinctive take on the theme song to “Rural Juror,” a surreal piece of lyrical creation that sends the show out with the same anything goes spirit that defined the series at its best.