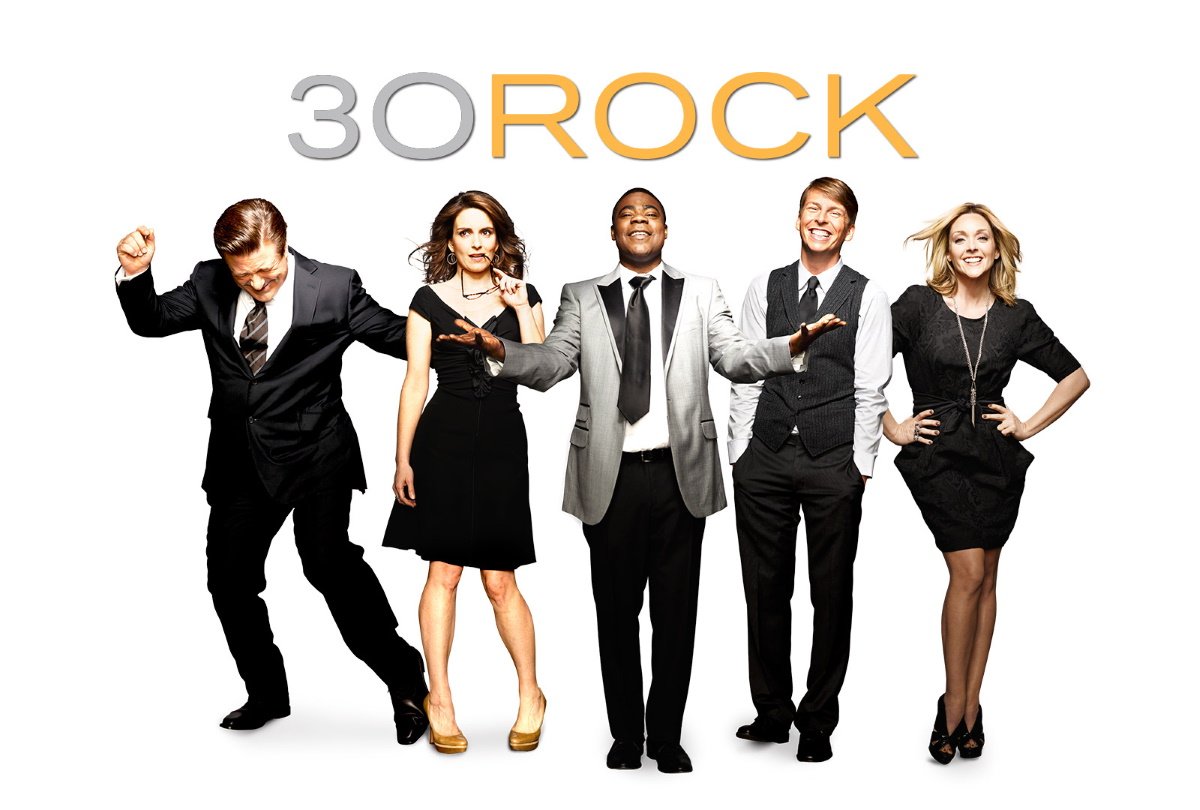 The 2006 TV season treated viewers to not one but two shows set backstage at a late-night comedy skit show. 30 Rock (2006-2013, TV-14), created by and starring Tina Fey, the former head writer of Saturday Night Live, for NBC was the funny one.

Fey plays Liz Lemon, head writer of the fictional The Girlie Show, a femme-centric late-night skit comedy that undergoes a sudden transformation under the velvet fist of her new boss Jack Donaghy (a pitch perfect Alec Baldwin), the Vice-President of East Coast Television and Microwave Oven programming (and the creator of the Tri-Fection Oven!). The first thing he does is hire former movie star and blissfully unhinged celebrity Tracy Jordan (Tracy Morgan) and rebrand the show as TGS with Tracy Jordan, which transforms the former headliner Jenna (Jane Krakowski) into a quivering mass of neurotic paranoia… which isn’t a whole lot different than her usual, obliviously self-absorbed state.

Fey is marvelous as the romantically challenged Lemon, more at home trading insults with her writing staff than going out on dates, and Alec Baldwin is, simply put, the funniest thing on TV as the supremely confident executive determined to become Lemon’s mentor in all things corporate. Jack McBrayer almost steals the show from Baldwin as the perpetually sunny NBC page Kenneth, Scott Adsit, Judah Friedlander, and Keith Powell costar as members of the writing staff, and the guest cast in the first season includes Isabella Rossellini (as Jack’s soon-to-be ex-wife), Paul Reubens, Emily Mortimer, Rip Torn, Will Arnett, Elaine Stritch, and Rachel Dratch, who appears in almost every first season episode, always in a different role.

The series was nominated for 10 Primetime Emmy Awards and won for best comedy in its freshman outing.

It sailed into a second season, where Donaghy makes his play for corporate promotion and grooms Liz to be his successor, only to tangle with an unprincipled rival (guest star Will Arnett), fall into an affair with a (gasp!) Democratic politician (guest star Edie Falco) and take a position with Homeland Security. It was nominated for 17 Primetime Emmy Awards and won seven, including best comedy series and acting nods for Fey, Baldin, and guest star Tim Conway.

In Season Five, Liz struggles with her new romance with an airline pilot (Matt Damon), Jack adjusts to married life and impending fatherhood while weathering the corporate shift to KableTown, and Tracy goes AWOL. This season also features the “Live Show,” a stunt episode that doesn’t quite work, even with the brilliant casting of Julia Louis-Dreyfus as “Flashback Liz.”

The seventh and final season brings happy endings to Tina Fey’s madcap sitcom of life in the halls of network television, which isn’t easy with this collection of neurotic TV stars and scheming executives. Even Fey’s Liz Lemon can’t sabotage this stab at a fulfilling life after 40 with not-too-bright beau who adores her, and Baldwin (arguably the funniest man on TV during the run of the show) takes Jack Donaghy to new heights of corporate manipulation. There’s a lot crammed into the final 13 episodes of the show (yes, it’s another short finale season), which is busy with rapid-dire visual gags and non-sequitors under normal circumstances. They manage to bring almost every significant recurring character back for a final bow.

Though never a ratings powerhouse, it was a critical favorite and a big Emmy winner and it developed a strong following, thanks to its inventive humor, wacky satire and rapid-fire dialogue. Baldwin was arguably the funniest man on TV during the run of the show and the stellar roster of guest stars brought the show to even greater heights at times. Over the course of its run, it was nominated for 103 Primetime Emmy Awards and won 16,