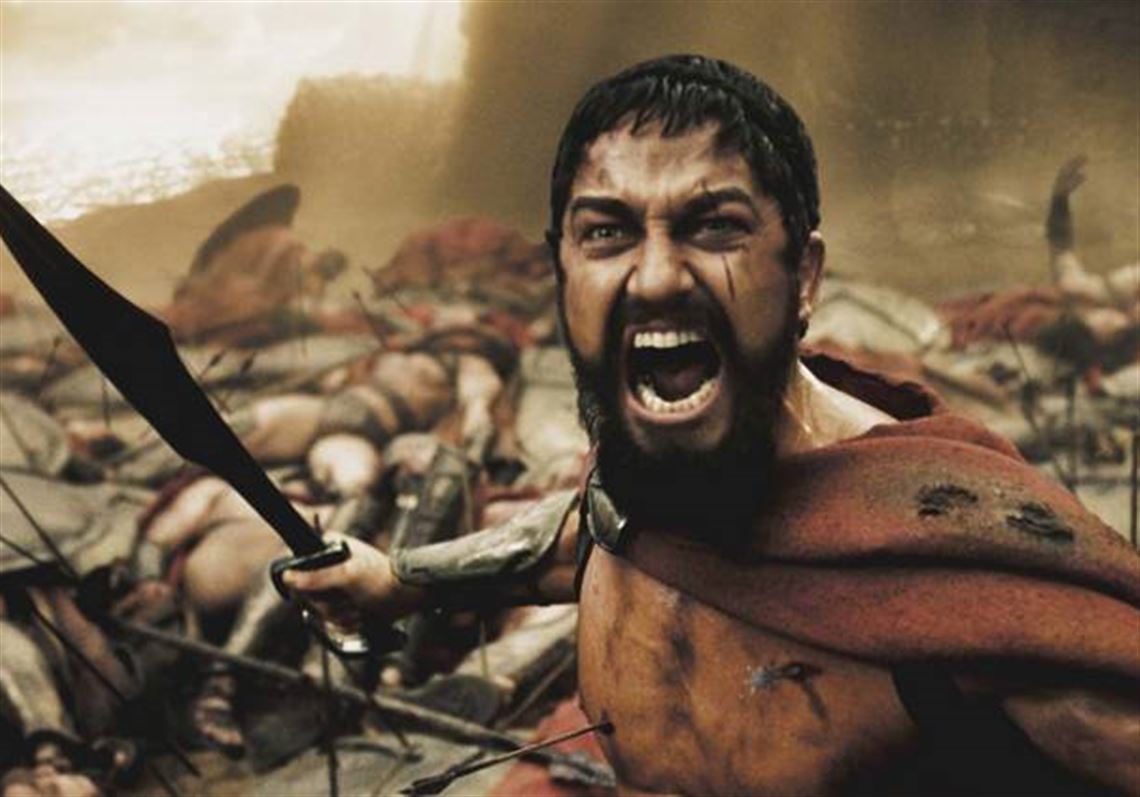 The real-life Battle of Thermopylae, where 300 elite warriors from the militaristic city-state of Sparta held off an invading Persian army numbering hundreds of thousands for three days, gets a dizzying cinematic treatment in 300 (2006), Zach Snyder’s slavishly faithful adaptation of the graphic novel by Sin City creator Frank Miller. Gerard Butler leads the charge as King Leonidas, personally taking his soldiers into battle, and Lena Headey is his loyal warrior queen keeping a potential rebellion at home at bay.

Snyder’s film, like Sin City, drops live actors into sets and settings literally painted by pixels of computer generated imagery, but Snyder’s execution is both more visually entrancing—every frame is a vivid piece of graphic art etched in charcoal and crimson and bronze and fire—and more cinematically fluid and flowing than its predecessor.

It’s also a perverse glorification of military culture turned fetishistic fantasy, with men marching into battle wearing nothing but a scarlet cape, leathers boots and speedos, and impeccably cut pecs and biceps, like an army of Mr. Universe finalists in a Gay Pride parade. The film, like the source material, embraces the ideology of discipline, machismo, and chauvinism without question, and presents the invading Persian culture as decadent and corrupt.

Forget realism, this is Greek history as a macho fantasy that privileges brute force over intellect and turns war in an epic gladiator battle. Think “Lord of the Rings” myth and spectacle, with thousands of gigabytes of black CGI blood spilled and spattered across the screen.

Also on Blu-ray and DVD and on SVOD through Amazon Prime, iTunes, GooglePlay, Vudu and/or other services. Availability may vary by service.
300: The Complete Experience [Blu-ray]
300 [Blu-ray]
300: Two-Disc Special Edition [DVD]
300 [4K UHD]

Blu-ray and DVD editions all include commentary by director Zach Snyder with co-writer Kurt Johnstad and cinematographer Larry Fong, with Snyder dominating the talk with a veritable shot-by-shot rundown of how the images were made and where the CGI was applied. The “Two-Disc Special Edition” DVD is highlighted by the 25 minute featurette “300 Spartans – Fact Or Fiction?,” which compares the historical record with the fictions and exaggerations of the movie (and celebrates a few of the visual incarnations of murkier aspects of the culture) and “Frank Miller Tapes,” a 14-minute profile on writer/artist Frank Miller and the creation of the original graphic novel, highlighted by direct comparisons between Miller’s art and frames of film. In Miller’s own words, “What I did was an evocation and not a history piece, and what Zach did was an evocation and not a history piece.” Got it? Also includes three deleted scenes with introductions by Zack Snyder, the short featurette “Who Were The Spartans?: Warriors of the 300,” the 6-minute promotional “Making of 300,” the stills and time-lapse video montage “Making 300 in Images”, and 13 documentary webisodes on various aspects of production.