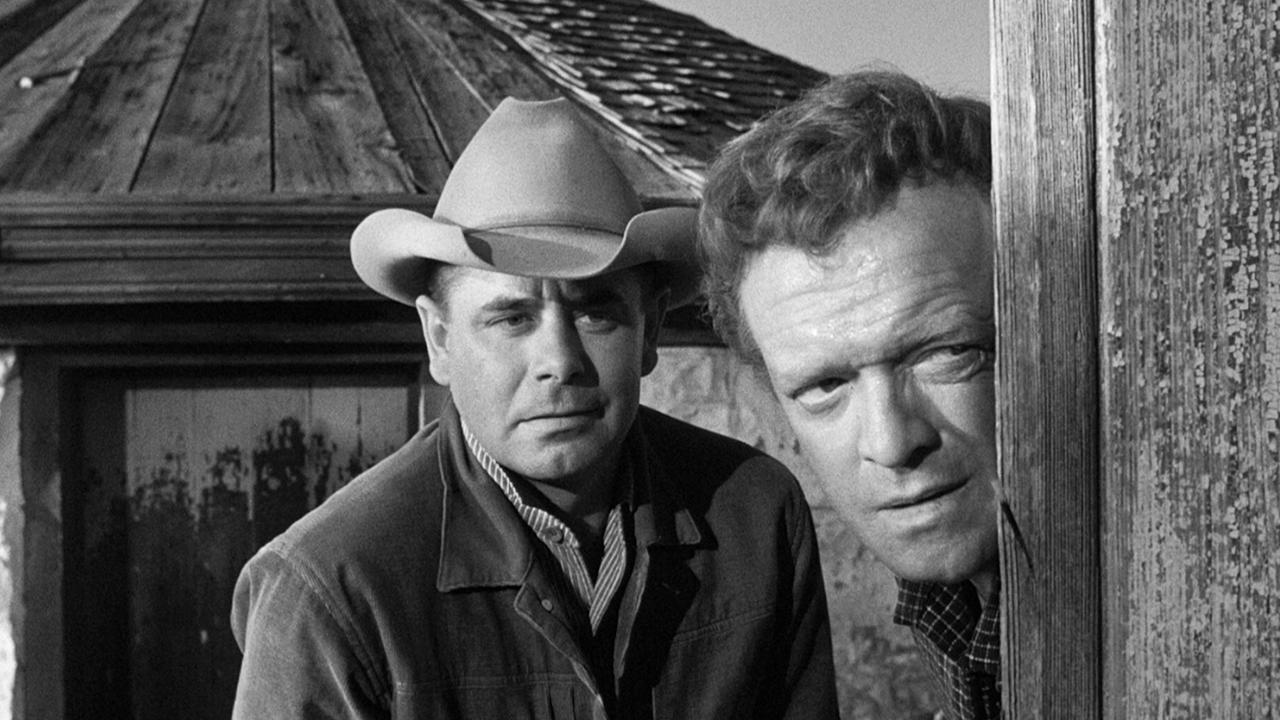 Van Heflin is Dan, a struggling rancher and father who witnesses outlaw Ben Wade (Glenn Ford) and his gang rob a stagecoach. Ford plays the cool-headed Ben as cunning and charming in equal doses. He exudes control in his quiet speech and polite manners: he’s not about to start violence and would just as soon complete the robbery in complete calm, but when the stage driver grabs a gun he’s quick to finish the job.

Dan just waits it out, much to the consternation of his sons, and the implied criticism wounds him deeply. His decision to take the Ben to prison when he’s captured by the local sheriff may have as much to do with his own sense of dignity as it does with the reward money.

Set during a drought in the empty, parched west, the film is defined by emptiness and dust, its players alone and vulnerable in the eerie landscape. In contrast to the open spaces both outside and in (the hotel lobby is almost imposing in its huge size serving no one but the desk clerk and a drunk sleeping it off on the couch) is the interior of Dan’s home, with its cozy size and low ceilings, warmed by pools of lamplight and a family gathered around a dinner table. Ben, true to form, puts on his best manners for the family with all sincerity, but once Dan heads out with Ben as his prisoner, it turns into a battle of wills and wiles as the charming and deadly gunman picks at the farmer’s confidence while slowly warming to his sense of honor and duty.

It’s directed by Delmer Daves, a Hollywood pro with a long career and an impressive filmography. Like most directors of his era, he moved easily between all genres but he proved his affinity for the western from his very first effort in the genre, the 1950 classic Broken Arrow. Along with his fine eye for imagery, Daves brings a psychological dimension and an adult sensibility to his westerns. In his best films, his characters inhabit relationships and emotions that came out of real life. This is one of his best. The story is pure Elmore Leonard, both deflating and celebrating against-all-odds heroism in a well plotted waiting game, but the stakes, the depth, and richly-drawn characters are given dimension by Daves.

The modest but tense frontier thriller features excellent turns by Henry Jones as a town drunk who proves his worth in selfless sacrifice and Richard Jaeckel as Ben’s smiling second in command. Also stars Felicia Farr and Leora Dana.

James Mangold remade the movie (quite well, in fact) in 2007 with Christian Bale and Russell Crowe.

It was added to the National Film Registry in 2012.

The Criterion Collection special edition Blu-ray and DVD releases feature video interviews with Elmore Leonard, author of the original short story (13 minutes), and Peter Lord, Glenn Ford’s son and biographer (16 minutes), plus a booklet with an essay by Kent Jones.