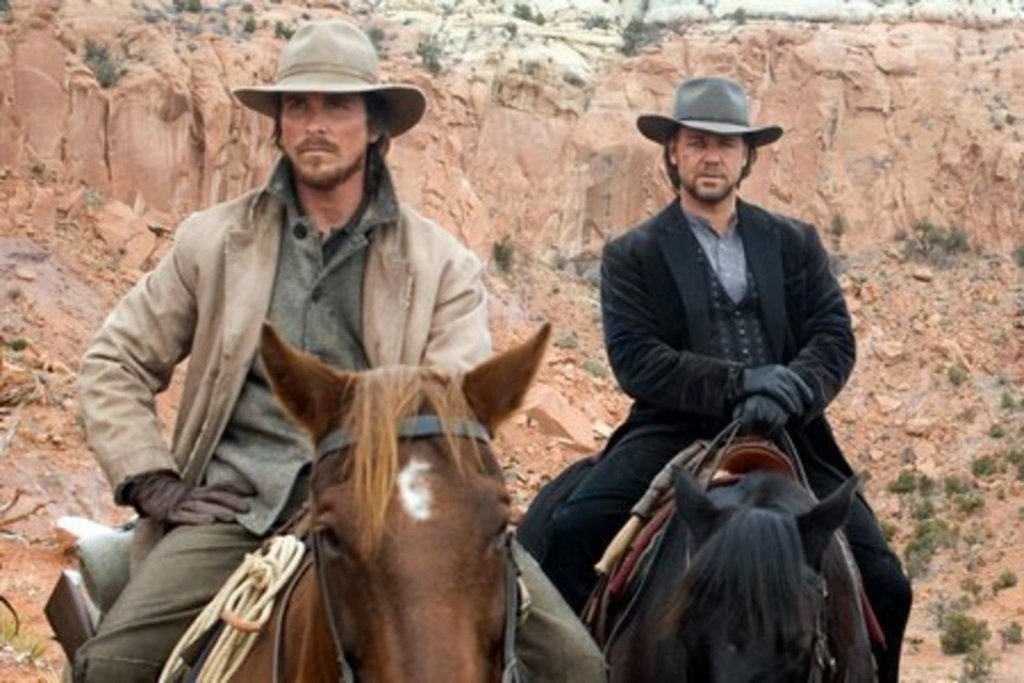 3:10 to Yuma (2007) – Delmer Dave’s original 1957 3:10 to Yuma, based on the short story by Elmore Leonard, is a superior western: understated, smart, visually modest and dramatically surprising. James Mangold’s remake is a fine film its own right. It is respectful of the story and the situation and then it goes its own way with it.

Christian Bale takes over the Van Heflin role of struggling rancher Dan Evans, transformed here into a crippled Civil War veteran struggling to hold on to his farm while a rancher tries to drive him off. Russell Crowe is the charming but brutal outlaw Ben Wade (the part originally played by Glenn Ford), captured in an ill-advised dalliance after successfully pulling a stage robbery and snuck out from under the noses of his gang by Evans and a small posse. Mangold adds his own obstacles to their journey, including renegade Indians, a predatory rail company blasting a line through the hills, and Evans’ own son, who sees only failure and cowardice in his father and is mesmerized by Wade.

It’s a brutal film about brutal people on the frontier, where even the “good guys” are often thugs in it for the money, and Bale and Crowe are excellent as the antagonists who develop a grudging respect for one another during the course of their journey. Ben Foster is terrific as Wade’s vicious right-hand man, Gretchen Mol is Evans’ frustrated wife, and Alan Tudyk, Vinessa Shaw, and Peter Fonda co-star.

, iTunes, GooglePlay and/or other services. Availability may vary by service.
3:10 To Yuma [Blu-ray]

The Blu-ray and DVD releases from Lionsgate features commentary by director James Mangold, which is measured and detailed and a plays a little like a lecture. Which is not to say it’s not interesting, it’s merely not as engaging as others. The seven deleted/extended scenes run under ten minutes and offer glimpses at some nice grace notes and details that were edited out to move the film along. The disc also features the 20-minute making-of featurette “Destination Yuma,” the 13-minute documentary featurette “Outlaws, Gangs and Posses” on the reality behind the myth of the “noble outlaw,” and a brief featurette called “An Epic Explored,” with cast and crew reflecting on the iconic and mythic power of the western. The Blu-ray release includes additional exclusive supplements.