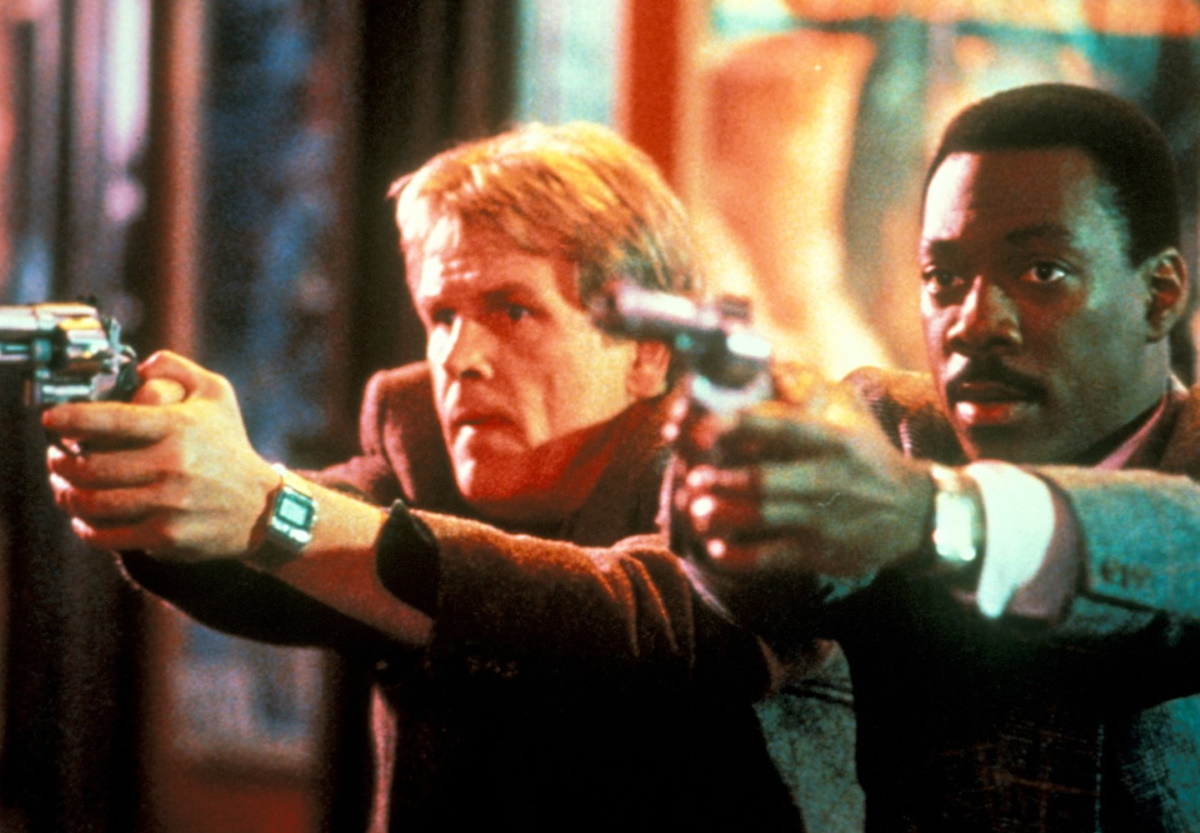 Walter Hill pretty much created the contemporary buddy action movie with 48 Hrs. (1982), his first genuine blockbuster and (the grindhouse success turned cult phenomenon of The Warriors aside) his breakout film.

Taking a story rife with cliché—maverick cop (Nick Nolte) and wise-guy criminal (Eddie Murphy) team-up up in a shaky partnership to take down a truly dangerous bad guy—Hill injects larger-than-life personalities into the characters, a rollicking sense of humor to the situation and a gritty edge to the action.

Nolte’s Jack Cates is bulldog of a cop but a trainwreck of a human being. He neglects his long-suffering girlfriend (Annette O’Toole) and subjects his prisoner-turned-partner Reggie Hammond (Eddie Murphy), a smart-talking con sprung from prison to help track down his vicious former partner (James Remar), to an unending barrage of insults and demeaning slurs. Of course, a healthy respect develops between the two, right around the time they beat the living out of one another in a sidebar punch-out, what passes for male-bonding in this macho universe.

With its nocturnal urban setting and electric score, it’s a precursor to the neon noir of the eighties but with Hill’s distinctive sensibility: a knowing mix of pulp style, hard-bitten grit and sleek visuals. Hill strips the action down to its brutal core, like a minimalist urban Peckinpah, and in the excesses of recent action extravaganzas, the violence with which bullets hit flesh and drop bodies is quite startling.

But for all his shoot-outs, breathless, physical foot-chases and the careening metal-on-metal car-versus-bus finale, it’s really the ingenious casting and unlikely chemistry that makes the film. Hill gave Saturday Night Live breakout performer Murphy his film debut and counted on the comedian to carry a dramatic load. Murphy comes through, all but stealing the film when he takes charge of a redneck joint with nothing but bluster, attitude and a borrowed badge. And for all the contrivances of their unlikely bonding, Hill sells the friendship under fire. Why not, when Reggie agrees to tag along on a longshot hunch because it’s more fun than going back to prison?

It turned the film into a big hot, launched Murphy as a movie star, and helped turn the buddy action movie into an American movie staple.

Also on Blu-ray and DVD and on SVOD through Amazon Video, iTunes, GooglePlay, Fandango, Vudu and/or other services. Availability may vary by service.
48 Hrs. [Blu-ray]
48 Hrs. [DVD]