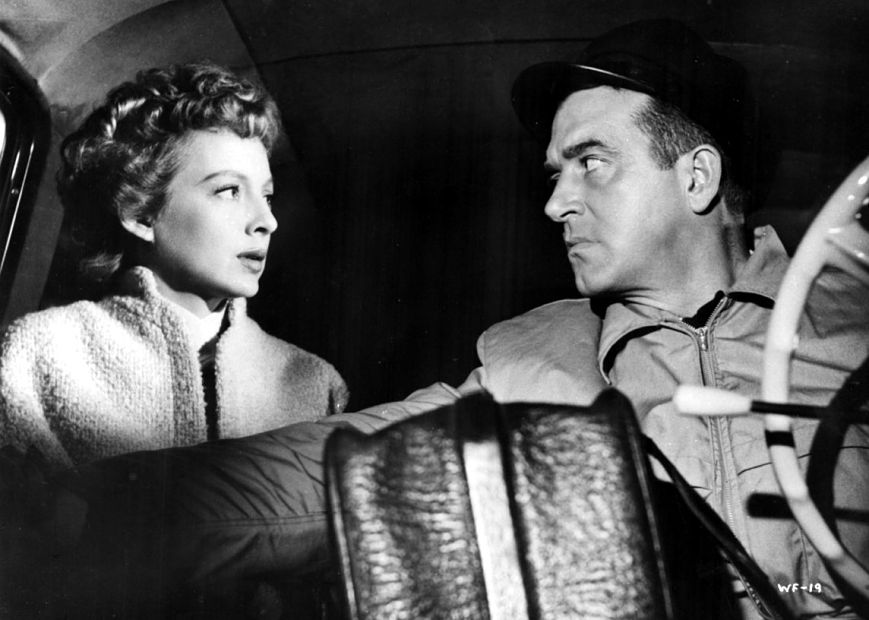 Phil Karlson is, to my mind, to toughest of the film noir directors. Films like Kansas City Confidential and Phenix City Story give us heroes who get knocked around by life and come up for more. 99 River Street (1953), arguably Karlson’s greatest film and certainly his most beautifully brutal, is a film driven by the fury of a man who is tired of being life’s punching bag.

The film opens on a boxing match shot Weegee style: spare, bright, all close-ups and hard light on our boxer hero, Ernie Driscoll (John Payne), getting one of the fiercest beatings I’ve seen in a classic Hollywood film. The kicker to this prologue is too good to spoil, but suffice it to say that it is just one of the inventive storytelling inspirations that both enlivens the film and informs the character. Ernie was once a contender and while he still relives that fight in his head, he’s rolled with the blow and come up with a new plan. Not so his wife (Peggie Castle), who hitched herself to this rising star in anticipation of the high life and ended up in a crummy apartment and a job slinging drinks at a cocktail bar. She’s got plans and it involves a sleazy thief (Brad Dexter, playing it with an arrogant, greedy twinkle) and a fortune in jewels that his own arrogance has made worthless. He needs a patsy and Ernie is his guy.

Along with the working class milieu and the blue collar loyalty of his dispatcher buddy Stan (Frank Faylen in upbeat form) and still-idealistic young actress Linda (Evelyn Keyes), a buddy from his coffee-shop breaks, Karlson gives this brawny noir a shot of theatrical flair that joins it, if only momentarily, with a rarified sub-genre of noir where the exaggerated melodrama of theater and actors gets tangled in the “real world” of troubled characters, personal betrayal and criminal threats. Linda, so wrapped in her own dreams, twists the knife in wounds she has no idea even exist when she pulls Ernie into her world of make-believe, but redeems herself by using her talents (and putting herself on the line) with a performance in the theater of life.

Payne has never been better than here as the salt-of-the-earth mug who had his shot at the top, was knocked back and picked himself back up and returned to his blue-collar roots as a cab driver and saving for a gas station. But echoes of the fight that ended his career bounce around head and his anger over being played a chump explodes in a ferocity that almost blows his chances. Though once a light, blandly handsome lead in musicals and romantic comedies, Payne remade himself as a taciturn post-war tough guy and used his broad-shouldered physique and the strength of his physicality to make himself a formidable action hero. He’s as convincing a boxer as you’ve seen in the movies and the film plays on that identity—and the fury driving his desperate search to clear his name and save his life over the long night on the rough city streets and waterfront dives—to give the fight scenes a brutal ferocity.

While shot largely on studio sets, 99 River Street is one of the great urban noirs of the anonymous city. Taking place entirely at night, on city streets and waterfront docks, in corner coffee shops and cheap bars, boxing gyms and taxi garages, Karlson casts it all in shadow and fills it with the shady characters and criminal elements that come out at night. He makes brilliant use of the boxing ring play-by-play, which comes back as both tormenting memory and triumphant commentary in a superbly-executed climax. And he fills the soundtrack with a superb audio atmosphere of urban sounds echoing through the background, giving the film a far more modern quality than many of its era.

, iTunes, GooglePlay and/or other services. Availability may vary by service.
99 River Street [Blu-ray]

The Blu-ray from Kino Lorber is mastered from a new HD transfer and features a commentary track from film noir historian Eddie Muller, a veteran of these things. Muller is pretty good at this, stirring in backstory and production notes with critical observations.

The DVD is available on bare-bones burn-on-demand DVD-R from the MGM Limited Edition Collection.