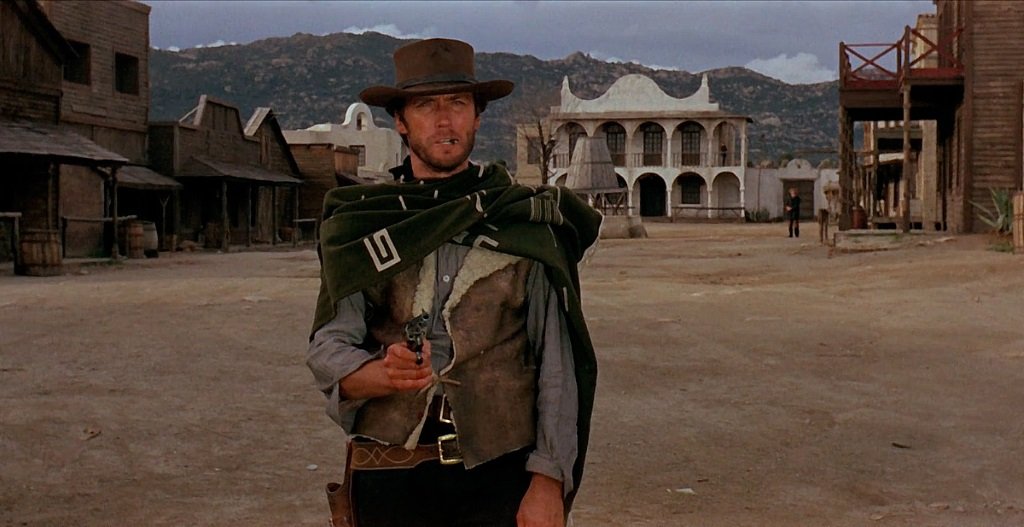 When Sergio Leone’s sunbaked A Fistful of Dollars (1964) rode into American theaters, caked in dust and sweat and stubble, critics dismissed it a cheap western, and a European knock-off at that.

It was a blatant rip-off of Akira Kurosawa’s cynical samurai hit Yojimbo with American TV star Clint Eastwood, known to audiences as the impetuous but charming Rowdy Yates in the long-running western Rawhide, in the Toshiro Mifune role, now a mercenary in a serape wandering the Mexican badlands. He strides into a violent bordertown under the thumb of warring crime families and sells his services to the highest bidder, all while playing them off one another. Sergio Leone transformed the grinning cowpoke into a scraggly, silent man with no name, a wandering rogue with a scheming mind and a sense of humor drier than the dusty, wind-scoured desert.

Shot in Spain, with the dry, desolate Spanish desert standing in for the bordertowns and badlands of southwest American and Mexico, this was a new kind of western: cynical, violent, stylish, and austere, playing out in a landscape of endless deserts and clapboard towns infested with gunmen. Clint’s rough face and squinting eyes fill the widescreen frame in massive close-ups while Leone stages action in bold compositions on empty streets and stark landscapes. The guns ring out in cartoonish exaggeration and the music, an eclectic, electric mix of buzzing guitar, human voice, and harmonica by Ennio Morricone, sets the whole thing in a world pitched between myth and modernity.

Audiences embraced the crude violence, the primeval austerity, and the morally relative world. It launched Eastwood as a terse, lean big screen icon and ushered in a flood of spaghetti Italian westerns, including two pseudo-sequels from Leone also starring Eastwood. A Fistful of Dollars was not the first spaghetti western, but it set the style and the tone of the films to come and set the bar that all would be measured against. It changed the face of the American western for better, for worse, and forever

Add to My Watchlist on Amazon Prime Video or stream free on Hoopla, which is available through most library systems.

, iTunes, GooglePlay and/or other services. Availability may vary by service.
A Fistful of Dollars [Blu-ray]

A Fistful of Dollars [DVD]

The Sergio Leone Anthology (A Fistful Of Dollars / For A Few Dollars More / The Good, The Bad And The Ugly / Duck, You Sucker) [DVD]

A Fistful of Dollars is available individually on Blu-ray and DVD and in various box set collections with other Leone spaghetti westerns. The box set editions include commentary by film historian Sir Christopher Frayling, the featurettes “A New Kind of Hero” (23 minutes) with Frayling on Eastwood and his performance, “A Few Weeks in Spain” (8 mins) with Eastwood discussing shooting the film, “Tre Voci” (11 mins) with interviews with producer Alberto Grimaldi, screenwriter Sergio Donati, and Mickey Knox, “Not Ready for Prime Time” (6 mins) with Monte Hellman discussing and the prologue he shot for the film’s American network TV premiere on August 29, 1977, and the prologue itself, saved thanks to a betamax copy recorded from the original TV telecast by a fan. “To the best of my knowledge, it only played once,” remembers Hellman.