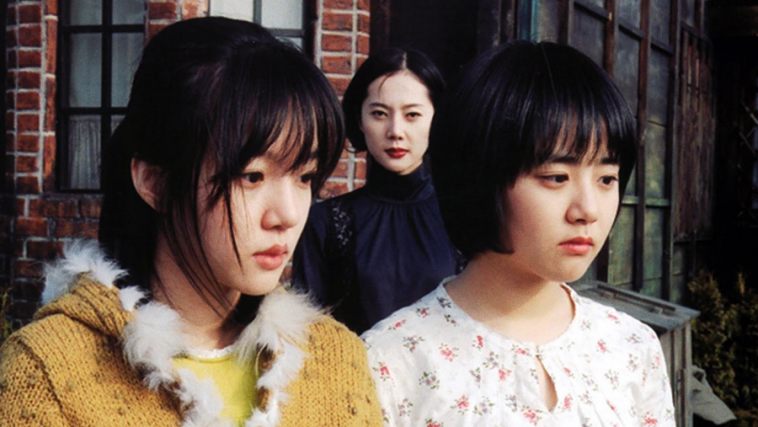 Ji-woon Kim has proven himself one of the most interesting and versatile filmmakers to come out of South Korea in the past two decades with such films as The Quiet Family (1998), The Good the Bad the Weird (2008), and I Saw the Devil (2010). With the haunting A Tale of Two Sisters (South Korea, 2003), he takes on horror and proves himself an accomplished director of unsettling cinematic visions grounded in very human stories.

With a coolly attenuated style that hovers at a distance, he observes the chilly relations between sisters Su-mi (the protective elder) and Su-yeon (the submissive, silent younger) and their frayed stepmother Eunjoo (Jung-ah Yum, whose try-too-hard politeness is both sympathetic and suspiciously icy) in a house haunted by past (mis)deeds that are never discussed.

It’s hard to tell what holds more sway over the creepy doings of the house: guilt, ghosts (both eerie floating specters and a screamingly terrifying figure of rotting black vengeance that crawls under the cabinets), or sheer madness. The shadowy, suggestive images and unnerving silences interrupted by quiet footsteps, ticking clocks, and squishy Lynchian soundscapes, makes the haunting of this house so shiver inducing that you don’t really care, at least for the first 90 minutes.

The frisson dissipates in the flashbacks of the third act, where the complex explanations trades the eeriness for an aching sadness, but Kim saves a few heart-grabbing moments to punctuate the back story. For all the contrived ingenuity of Kim’s twisting screenplay, the final moments land on a solid emotional foundation that explains, enriches, and reverberates back through the film. It makes for one of the best and most haunting Asian horror films of the 21st century.

Add to My List on Criterion Channel or My List on Shudder, or watch for free on Kanopy, which is available through most public and college library services.

, iTunes, GooglePlay, Fandango, Vudu and/or other services. Availability may vary by service.
A Tale of Two Sisters [DVD]

The two-disc set from Tartan Video features two commentary tracks (one by director Ji-woon Kim with cinematographer Lee Mo-gae and the lighting director, the other by Ji-woon Kim with his actors) and a behind-the-scenes featurette as well as “To the Viewer: Director’s Analysis,” a “Psychiatrist’s Perspective,” post-production featurettes, cast interviews, deleted scenes, two hidden “letters” from the sisters, and bonus trailers.