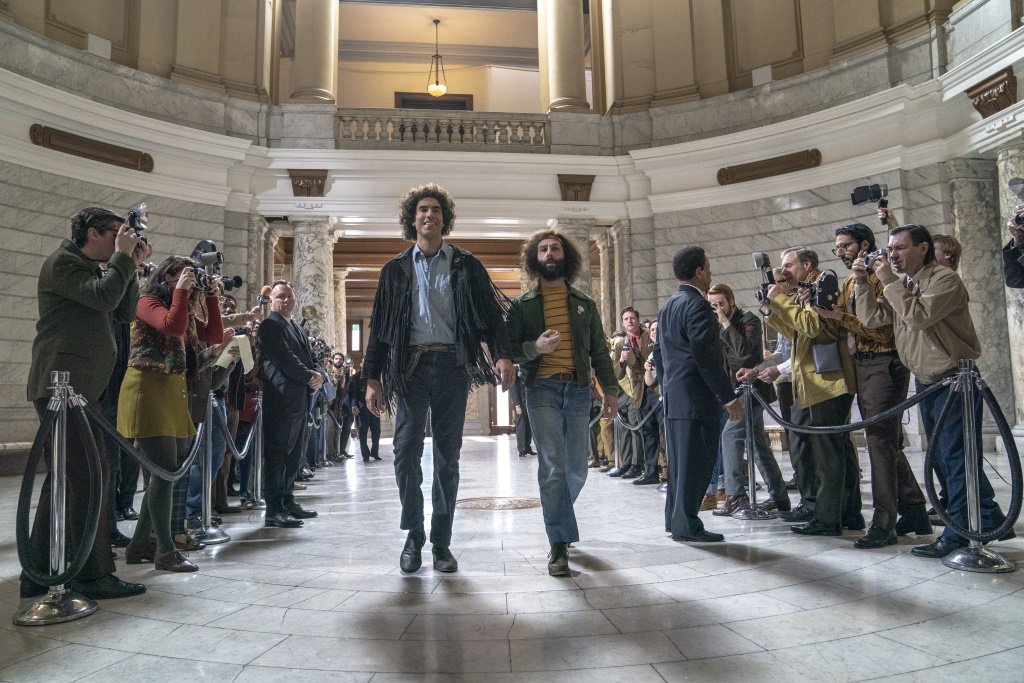 Courtroom drama meets political theater in “The Trial of the Chicago 7” (2020, not rated), Aaron Sorkin’s dramatization of the real-life trial of the protest leaders at the 1968 Democratic National Convention charged with “conspiracy.” Sorkin takes on issues of free speech, protest, and suppression within the clash between the counterculture and mainstream, and the conflict between defendants Abbie Hoffman (Sacha Baron Cohen) and Tom Hayden (Eddie Redmayn), bringing a timely relevance to the this chapter of American history. The high-powered cast also includes Abdul-Mateen II, Jeremy Strong, Joseph Gordon-Levitt, John Carroll Lynch, and Frank Langella. (Netflix)

Writer and actress Heidi Schreck, a Washington State native, revisits her teenage years and her relationship with the nation’s founding document in her original play “What the Constitution Means to Me” (2020, not rated). Director Marielle Heller (“A Beautiful Day in the Neighborhood”) brings the live show to the small screen. (Amazon Prime)

Using video footage shot over the course of two decades, the documentary “Time” (2020, PG-13) chronicles the story of a woman raising her six sons while fighting for the release of her husband from the notorious Angola prison in Louisiana. It won awards at Sundance and Full Frame Documentary film festivals. (Amazon Prime)

“Helstrom: Season 1” (TV-MA), based on characters from Marvel Comics, is a supernatural thriller about the grown children (Tom Austen and Sydney Lemmon) of a serial killer and a demonically-possessed mother who devote their lives to hunting down the worst of humanity. (Hulu)

“You Choose 2020” (not rated) is a free interactive guide to the voting process aimed at younger voters. (YouTube)

Dev Patel stars in “The Personal History of David Copperfield” (2019), PG), Armando Iannucci’s jaunty, energetic adaptation of the sprawling Charles Dickens classic about an orphan whose spirit helps him triumph over adversity.

“S#!%house” (2020, R), an indie college comedy with a vulnerable center, won to the Grand Jury Prize at the SXSW festival.

A high school freshman (Tamara Smart) finds herself ushered into a secret society that guards their charges from monsters in “A Babysitter’s Guide to Monster Hunting” (2020, TV-PG), based on the popular scary book series by Joe Ballarini.

“La Révolution: Season 1” (France, not rated, with subtitles) reimagines French history with the decadent aristocracy becoming literal bluebloods plagued by a disease that turns them into bloodthirsty killers and the inventor of the guillotine (Amir El Kacem) the unlikely hero of the French Revolution.

Brad Pitt hits a home run in “Moneyball” (2011, PG-13), a drama about how the business of baseball was reinvented by Billy Beane in the era of multi-million dollar payrolls.

“Social Distance” (not rated), an anthology series of tales shot in isolation;

International passport: “Someone Has to Die” (Spain, not rated, with subtitles) is three-part crime thriller about love and family honor in 1950s Spain. Also new:

True stories: “Rooting for Roona” (2020, not rated) chronicles the journey of a child with hydrocephalus who gets a chance at life-changing surgery after her photos go viral.

Another double feature in the “Welcome to the Blumhouse” anthology arrives this week: “Evil Eye” (2020, not rated), based off the award-winning, best-selling Audible Original production from writer Madhuri Shekar, and “Nocturne“(2020, not rated), a thriller about competitive twin sisters at an elite arts academy.

Based on the book by New York Times national security correspondent David E. Sanger, the documentary “The Perfect Weapon” (2020, TV-14) explores the rise of cyber conflict between nations. (All HBO platforms)

“Mr. Mercedes: Seasons 1 & 2” (2017-2018, TV-MA) stars Brendan Gleeson as a retired detective who goes after a serial killer. Originally created for the Audience network by David E. Kelly, who adapted the “Bill Hodges” trilogy by Stephen King.

The “Play for Today Collection” presents dozens of selections from the 14-year run of original and adapted television plays written and directed by some of Britain’s greatest talents, among them Mike Leigh, Michael Apted, and Alan Clarke.

The three-part British crime thriller “Des” (not rated), based on a true story, delves into the mind of Britain’s most prolific serial killer (played by David Tennant). New episodes on subsequent Thursdays through October.

The horror streaming service debuts the exclusive features “The Mortuary Collection” (2019) an anthology horror film hosted by Clancy Brown, and “The Cleansing Hour” (2019, not rated), a twist on the exorcism genre.

“Starring Joan Crawford” presents over two dozen features spanning five decades from the Hollywood superstar, from the wonderfully weird silent horror “The Unknown” (1927) to the Gothic thriller “What Ever Happened to Baby Jane?“(1962) costarring Bette Davis in gargoyle mode, with some her most greatest and most glamorous films in between, among them the all-star classic “Grand Hotel” (1932), crime drama “A Woman’s Face” (1941), and film noir classics “Mildred Pierce” (1945), with Crawford in an Oscar-winning performance, and “Sudden Fear” (1952). New on Criterion Channel this month along with: