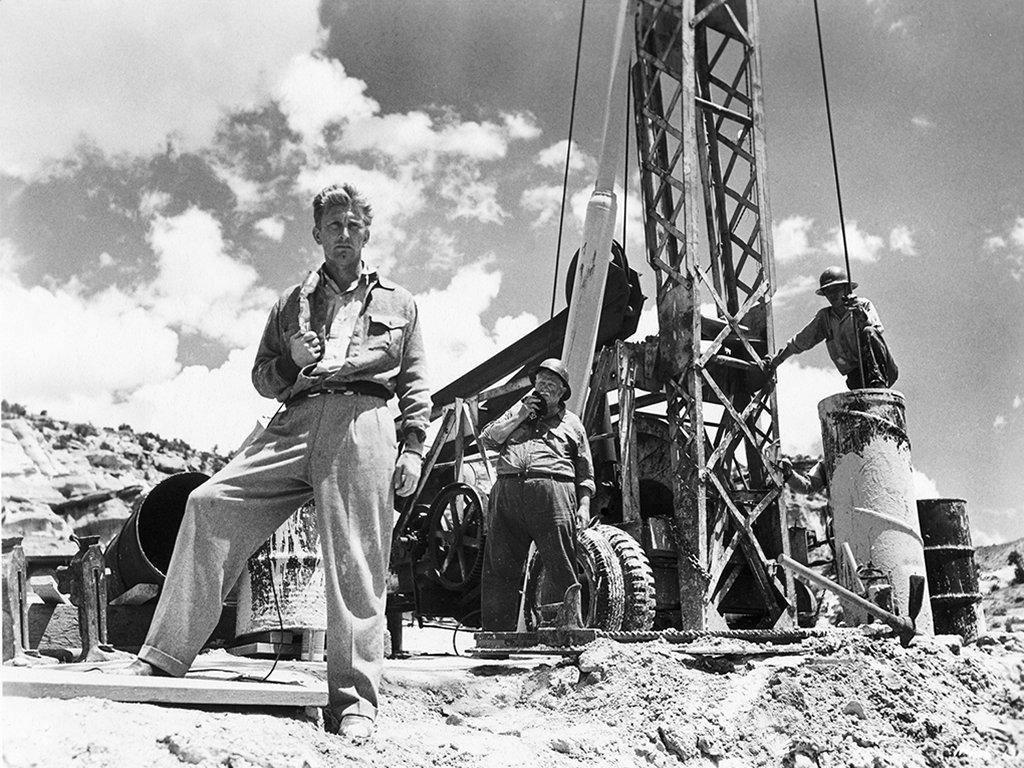 Billy Wilder is the American cinema’s most famous cynic, but nothing in his career is as scathing as his noir-tinged newspaper drama Ace in the Hole (1951), his indictment of the American media circus.

There’s not a more amoral hero in Wilder’s filmography than Kirk Douglas’s Chuck Tatum, an arrogant big city newsman stuck in an Albuquerque news office, looking for one big scoop to take him back to the top. Douglas is undeniably magnetic as the swaggering pro who smiles big while wishing for a juicy mutilation-murder, but the depth of his poisonous soul only becomes clear when he stumbles upon an explorer trapped in a cave-in. “I don’t make things happen, I just write about them,” he tells his photographer and young sidekick (Bob Arthur), right before he spins a minor cave rescue into a major media event and corrupts the would-be rescuers into becoming accessories to his long, drawn out, very public murder.

Jan Sterling is even more tawdry and soulless as the callow bottle blonde wife of the trapped man, ready to walk out on him until Chuck appeals to her mercenary instincts to play the worried wife in the center ring of his media circus, but Wilder implicates the entire culture in the dark carnival of American society that camps outside the cave. Tatum sees his own warped soul reflected in the tent city of gaping onlookers and mercenary hawkers he has created by his sideshow of opportunism, all responding to a human interest story lacking any humanity.

The film flopped with viewers in 1951—even at the height of American film noir it stands out as savage and cynical—but has become quite the cult movie in years since. It’s hard to believe so curdled a portrait of America’s fascination with public tragedy and the people who profit from it was ever produced in Hollywood’s dream factory.

, iTunes, GooglePlay and/or other services. Availability may vary by service.
Ace in the Hole (Criterion Collection) [Blu-ray+DVD]

Ace in the Hole (The Criterion Collection) [DVD]

“The character seems extreme even for Wilder, a director famously described by William Holden as a man with a mind full of razor blades,” opines film scholar Neil Sinyard in his accessible if somewhat scholarly commentary track. Also features the hour-long 1980 documentary “Portrait of a ‘60% Perfect Man’: Billy Wilder,” which is highlighted by lengthy interviews with Wilder himself and frequent stars Walter Matthau and Jack Lemmon, and 22 minutes of lively excerpts from Billy Wilder’s onstage interview at the AFI in 1986. Also features excerpts of interviews with Kirk Douglas from 1984 and screenwriter Walter Newman (audio only) from 1970. Spike Lee has the last word in his video afterward, remarking that the film is “dark for 2007, let alone 1951.” Criterion redesigned the accompanying booklet to fit the theme: it’s a folded broadsheet that reads like a small newspaper filled with essays by Molly Haskell and Guy Maddin running down the columns.