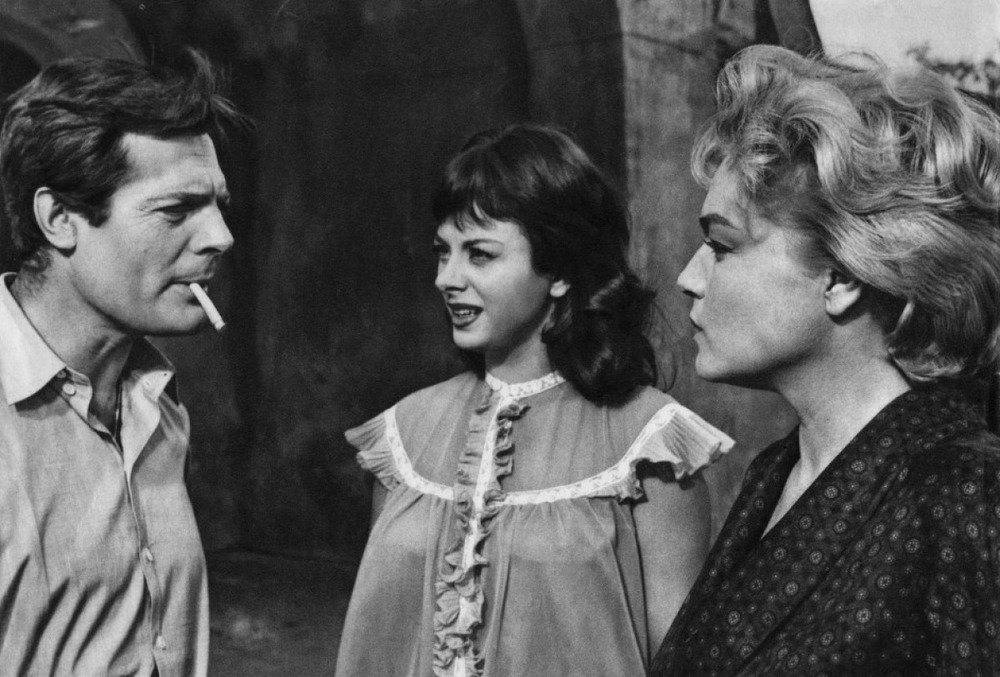 Adua and Her Friends (Italy, 1960) are prostitutes from a Rome brothel attempting to take charge of their own lives after their place is shut down in the aftermath of Italy’s Merlin Law, which ended legalized prostitution in 1958. Adua (Simone Signoret), a veteran of the life, has a plan to open a restaurant as a front for their own little brothel in the rooms upstairs and her friends—cynical and hot-headed Marilina (Emmanuelle Riva), naïve and trusting Lolita (Sandra Milo), practical Milly (Gina Rovere)—pitch in for the purchase and start-up and fake their way through running a real business. Adua may be a dreamer but she has a lot invested in this project. She’s the oldest of the four and, as anyone familiar with the films of Mizoguchi will attest, life on the streets isn’t forgiving of age. But what really charges up the film is the feeling of accomplishment and ownership as they work their way through each problem and, almost without noticing, create a successful business out of the restaurant.

For all the stumbles along the way, director Antonio Pietrangeli and his screenwriting partners (which includes future director Ettore Scola and longtime Fellini collaborator Tullio Pinelli) don’t play the disasters for laughs but rather a mix of warm character piece and spiky social commentary. It’s not simply that their pasts follow them around. The Merlin Law has actually made things worse for women, whether they remain in the life (without any legal protections) or attempt to transition into another career. Palms need to be greased and officials cut in on the business; they haven’t even started up and they’re already paying off a pimp. And no, it’s not Marcello Mastroianni’s Piero, a charming hustler who hawks cars and woos Adua, who enjoys engaging in a romance that she gets to define for a change. He’s a pleasant distraction and something of an ally, but he’s better at looking out for himself.

Pietrangeli has great empathy for women (based on the evidence of this film and his 1964 La Visita) and his story frames the sexual double standards and cultural chauvinism of their lives. Those are the kinds of forces that good intentions and elbow grease can’t always overcome. But between the arguments and setbacks, Pietrangeli offers a portrait of life lived in hard times and buoyed by friendship and hope for a better life. When Marilina’s young son moves in (the girls didn’t even know she was a mother), they coalesce in a kind of family. The scene of the boy’s baptism, with the women lined up like adoring aunts, is a lovely and touching moment. There are no happy ending fantasies here but their moments of triumph, solidarity, and defiance are oases in a life that otherwise has it out for their dreams of self-definition.

Black and white, in Italian with subtitles

, iTunes, GooglePlay and/or other services. Availability may vary by service.
Adua and Her Friends [Blu-ray]

Adua and Her Friends [DVD]

The Blu-ray and DVD editions from Raro look very good, clean and sharp with lots of detail, and sounds great. Its score is informed by fifties cool jazz (and I’m a sucker for any soundtrack featuring the vibes) and dotted with pop songs (including a great use of Santo and Johnny’s instrumental “Sleepwalk”). It features an introduction by Italian film historian Maurizio Poro, the short film Girandola 1910, a segment from the 1954 anthology comedy Amori de mezzo secolo directed by Pietrangeli, and a booklet with essays, excerpts essays and reviews, and filmographies.