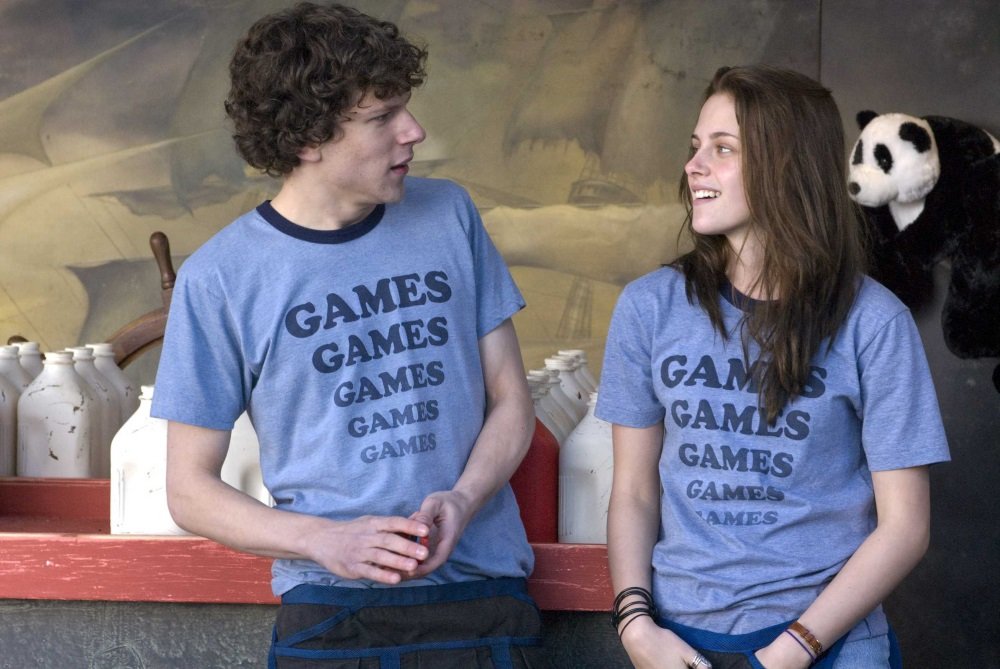 Adventureland (2009, R) is more than just a chintzy theme park outside of Pittsburgh, where college grad James Brennan (Jesse Eisenberg) spends a summer trying to save money for graduate school. It’s the real world adventures of life in the space between college and independence, that place where you think that you’re an adult but have yet to live outside of the bubble. It’s also one of the smartest, most observant coming-of-age comedies you’ll have the pleasure to see.

Greg Mottola’s semi-autobiographical film could be Superbad (which Mottola also directed) four years later, where the smart kid has embraced college and left his high-school world and identity far behind. Set in 1987, with all the attendant cultural detritus appropriately ticking the margins of the story, it charts the lost summer of a college graduate who ends up back in a social world more like high school. James is like the former high school nerd with a newfound sense of self thanks to college, where he discovered that ambition and intelligence are admirable qualities. But they are lost on this crowd except for Em (Kristen Stewart), the smart, supercool and somewhat messed-up girl. Stewart, who has a sometimes still, sometimes squirrelly presence that suggests a complicated emotional life under the surface, is the only thing that makes working the park bearable.

Mottola suggests the time and culture without falling into the cliché of the jukebox soundtrack of year-specific hits. “Rock Me Amadeus” drones on the amusement park PA so often that it threatens to drive some of the employees insane, but when the James and Em and the others slip back into their personal spaces, the soundtrack reflects their lives, not the current top forty. It’s their lifeline when they escape the job and need to reclaim their identity.

Adventureland is less outrageously funny than Superbad but more savvy. They may be technically adults, but their social behavior hasn’t matured much beyond high school and James’ coworkers still seem trapped in identities that formed long before. Even the park handyman (Ryan Reynolds) is no more mature than the kids, he just has a better line of bull. Written with an empathy for all the characters and directed with a sharp eye for telling detail and a sensitivity to honest social behavior and cruel social double standards, it’s about relationships and responsibility and identity. This coming-of-age story really is about growing up.

, iTunes, GooglePlay and/or other services. Availability may vary by service.
Adventureland [Blu-ray]

On DVD and Blu-ray in an unrated version from Lionsgate. Both feature commentary from writer/director Greg Mottola and actor Jesse Eisenberg, which begins with deadpan goofing but slowly ease into real observations and discussions of Mottola’s inspirations. The 16-minute “Just My Life: The Making of Adventureland” is a nicely-made behind-the-scenes featurette with plenty of outtakes and some entertaining interviews with the cast members, and there are three short deleted scenes (with optional commentary).

Exclusive to the Blu-ray are two very brief and quite fun featurettes (“Frigo’s Ball Taps,” a guide to rapping guys in the crotch, and “Lisa P’s Style Guide,” on how not to dress for success), mock commercials and training videos (you too can work at Adventureland after this orientation)