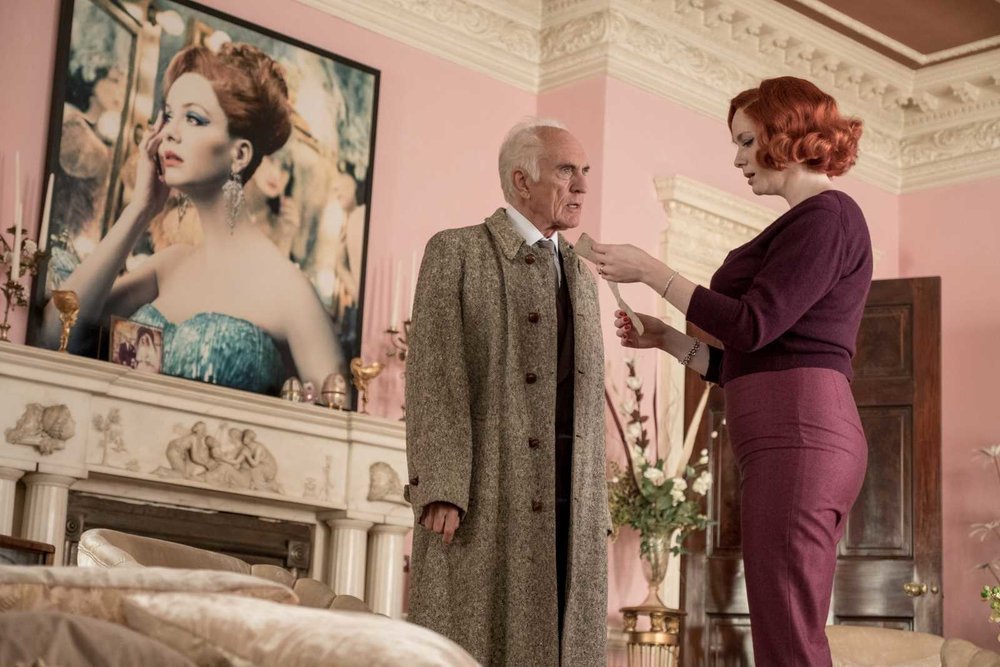 The handsome British mystery Crooked House (2017, PG-13), based on the Agatha Christie novel, features Glenn Close, Gillian Anderson, and Christina Hendricks as prime suspects in the murder of a business tycoon. Max Irons stars a former spy turned London P.I. dropped into a mansion filled with resentful relatives and Terence Stamp is a Scotland Yard inspector. Set in the 1950s (complete with early blasts of rock and roll), it plays like a big-budget Masterpiece Mystery and it was barely released in the U.S. Now streaming on Amazon Prime Video.

Roxanne Roxanne (2017, not rated) won a special jury prize at the 2017 Sundance Film Festival for the breakthrough performance by Chanté Adams, who plays real-life ’80s rapper Roxanne Shanté in the story of her early life trying to make her way through the Queensborough projects. It debuts on Netflix.

Not your usual superhero origin story, Professor Marston and the Wonder Women (2017, R) is about the Harvard psychologist and outspoken feminist (Luke Evans) who created the first female superhero with the two women (Rebecca Hall and Bella Heathcote) in his unconventional life. Now streaming on Hulu and reviewed on Stream On Demand here.

The documentary March of the Penguins 2: The Next Step (2017, not rated), Luc Jacquet’s return to the Antarctic, makes its U.S. debut on Hulu.

Matt Damon gets small in Downsizing (2017, R), a comedy that uses the incredible shrinking people gimmick for a social satire of class, economic anxiety, conservation, personal responsibility, and human nature. Also on DVD and at Redbox.

Jumanji: Welcome to the Jungle (2017, PG-13) transports teenagers into the bodies of Dwayne Johnson, Kevin Hart, Jack Black, and Karen Gillan to play a magical video game. Also on DVD and at Redbox.

Also new: Pitch Perfect 3 (2017, PG-13) with Anna Kendrick, Rebel Wilson, and the a cappella gang back for one more chorus;

The animated feature In This Corner of the World (Japan, 2016, PG-13, English dub and subtitles versions) is a wonderfully delicate portrait of civilian life in rural Japan during World War, largely avoiding politics in its humane portrait of those who survive. Reviewed on Stream On Demand here.

A shy American girl flies to Italy In Search of Fellini (2017, R) in this mix of travel film and cinematic love letter.

Streaming TV: Drew Barrymore is back on the Santa Clarita Diet in the second season of the suburban satire / zombie comedy with Timothy Olyphant, and teen comedy Alexa & Katie about best friends facing their first year of high school as one of them fights cancer. Also new:

Stand-up: from South Korea comes Yoo Byung Jae: Too Much Information (2018, with subtitles)

Susan Sarandon won an Oscar for Dead Man Walking (1995, R), based on the non-fiction book by Sister Helen Prejean.

Hugo (2011, PG), Martin Scorsese’s love letter to the magic of cinema set in a fantastical recreation of 1920s Paris, is also his first family film and it won five Oscars.

Streaming TV: Romanzo Criminale: The Complete Series (Italy, 2008-2010, with subtitles) is one of the most popular TV shows ever made in Italy, a real-life crime story turned into a sleek but rough gangster saga of Rome in the 1980s.

True stories: Finders Keepers (2015, R) follows the stranger than fiction story about the legal battle over a severed human leg and Ken Burns profiles Jackie Robinson (2016) in the 4-hour production made for PBS.

True stories: Life Itself (2014, not rated) is a loving portrait of film critic Roger Ebert by director Steve James, who started out adapting Ebert’s memoir and ended up chronicling the final months of his life.

Also new: Love and Saucers (2017, not rated) tells the strange story of David Huggins who claims to have been abducted numerous times by aliens.

Filmmaker Rebecca Miller explores the life and career of her father in the documentary Arthur Miller: Writer (2018, not rated) with intimate interviews she conducted over the decades.

Natalie Wood and Warren Beatty discover Splendor in the Grass (1961) in the Oscar-winning drama. It’s part of a “Young Love” collection that also include the nostalgic Summer of ’42 (1971, R) and the offbeat Scottish comedy Gregory’s Girl (1981, PG).

The tribute to Star of the Week: Ava Gardner includes the ravishing Pandora and the Flying Dutchman (1951) with James Mason, The Night of the Iguana (1964) with Richard Burton, and musical drama Show Boat (1951) and Chinese-American actress Anna May Wong is featured in collection that includes the British silent classic Piccadilly (1929) and the American film noir Impact (1949).

Director of the Week: Vera Chytilová celebrates the Czech New Wave filmmaker with five films including her masterpiece Daisies (Czechoslovakia, 1966, with subtitles) and “Bob Rafelson’s Hollywood” pays tribute to the producer/director with such modern classics as Easy Rider (1969, R) and Five Easy Pieces (1970, R).