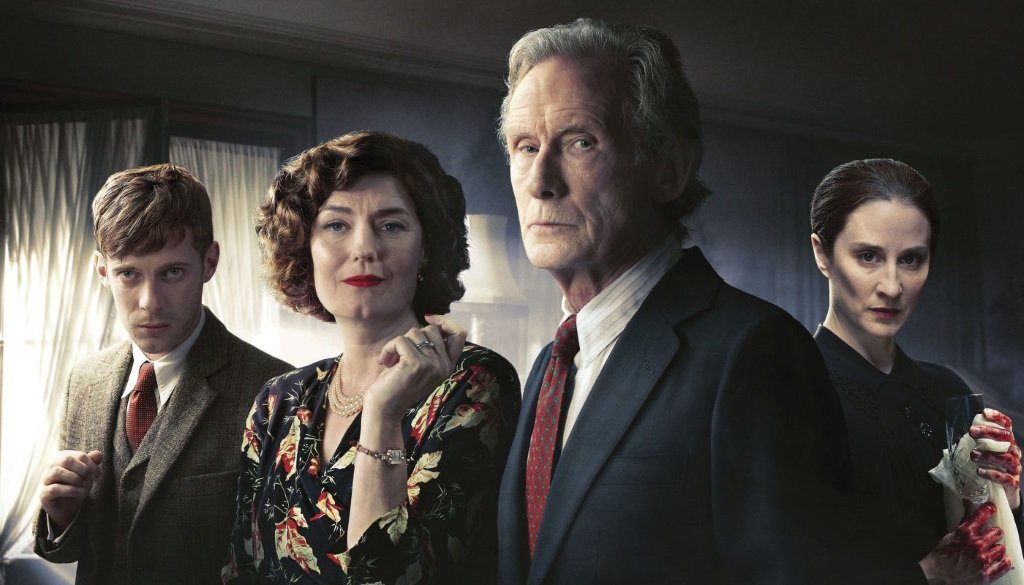 Ordeal by Innocence, a three-part murder mystery based on one of Agatha Christie’s favorite novels, stars Anna Chancellor as a wealthy philanthropist and murder victim and Bill Nighy, Matthew Goode, Alice Eve, Luke Treadaway, and Eleanor Tomlinson in the cast of suspects when it turns out that the convicted killer was actually innocent. It all plays out in the inevitable family manor home where suspicions begin to break down the already fragile family relations, and fans of the 1958 novel should be prepared for minor changes to the plot and a major twist added to the end.

RogerEbert.com critic Brian Tallerico praises the production as “top notch… including the production design and the work of the entire ensemble…. Every part is well-performed, but the most-acclaimed veterans—Nighy, Goode, Treadaway—do somewhat steal the show. All three are, as they almost always are, reason enough to watch on their own. And you get a crackling mystery too.”

The British TV production debuts in the U.S. on Amazon Prime Video.

Lily James is a young author in post-World War II England who travels to the Channel Islands and finds an eccentric community and a mystery in the romantic heartwarmer The Guernsey Literary and Potato Peel Pie Society (2018, not rated). Michael Huisman, Tom Courtney, and James’ Downton Abbey colleagues Jessica Brown Findlay and Penelope Wilton co-star. Comes directly to Netflix from British theaters.

Shia LaBeouf is perfectly cast as brash American tennis player John McEnroe in Borg vs McEnroe (2017, R), a drama about the rivalry between the two young phenoms and their legendary 1980 Wimbleton match: the American volcano versus the Swedish iceberg (Sverrir Gudnason as Bjorn Borg). Streaming on Hulu (delayed from July).

Orson Welles’ brilliant Touch of Evil (1958/1998, PG-13), a grimy, baroque film noir about power, bigotry, and a murder on the US/Mexico border starring Charlton Heston, Janet Leigh, and Welles himself, was taken from the director’s hands by the studio. This version is reedited according to Welles’ instructions. On Netflix.

The Rider (2017, R), a personal, intimate drama about Native American rodeo rider (Brady Jandreau) at a crossroads after a debilitating fall, uses the lives of its cast of non-actors (including Brady’s real-life parents) to inform the fictional drama created by writer/director Chloé Zhao. Also on disc and at Redbox.

The horror film Revenge (France, 2017, R, with subtitles), about a young woman who comes after the abusive married man who left her for dead, was a hit on the film festival circuit that broke through the American theaters.

All About the Washingtons: Season 1 stars hip-hop icon Rev. Run and his real-life wife Justine playing fictionalized version of themselves in a family sitcom.

Foreign affairs: crime thriller Perdida (Argentina, 2008, not rated, with subtitles) follows the mystery of a private school student from Buenos Aires who goes missing on a study trip. Also new: the animated features Flavors of Youth (China, 2018), which presents three stories of city life in China.

True stories: the Netflix Original short documentary Zion (2018, not rated) profiles Zion Clark, a competitive wrestler who was born without legs. Also new: Inside Deep Throat (2005, NC-17) looks at the pornographic movie that became a cultural earthquake (reviewed on Stream On Demand here).

Kid stuff: the comedy The Package (2018, not rated) follows five teens on a spring break camping trip. Also for teens and tweens is The Ponysitters Club: Season 1, a family show set on a ranch that rescues and rehabilitates horses.

Ralph Fiennes stars as a dispassionate British diplomat who goes digging into the murder of his activist wife (Rachel Weisz) and uncovers a conspiracy in The Constant Gardener (2005, R), a thriller based on the novel by John Le Carre. Also newly arrived:

The romantic drama Keep the Change (2018, not rated) is a warmhearted story of two lonely people with autism played by autistic actors. The American indie comes direct to Prime Video from theaters.

The playful animated feature The Illusionist (France, 2010, PG) is a tender tale of a French magician and a Scottish girl in London.

Charles Laughton is cruel mad scientist Dr. Moreau in Island of Lost Souls (1932), one of the most primal and perverse horror films of the classic era. Reviewed on Stream On Demand here.

Classics: the Marx Brothers stow away on a trans-Atlantic ship and raise havoc in Long Island high society in Monkey Business (1931), one of the funniest comedies from the four original Marx Brothers. Also new:

Film noir: Deadline at Dawn (1946), a wrong-man nightmare noir set over a long night in an urban jungle, is a film of shadows and secrets and moments of street poetry (Clifford Odets adapts Cornell Woolrich’s novel—what a combination!), plus Susan Hayward a dime-a-dancer with a maternal streak. Also new:

Pre code: Miriam Hopkins is a society girl dragged into degradation by a big city gangster (Jack LaRue) in The Story of Temple Drake (1933), one of the most daring and disturbing (not to mention lurid) dramas of the early 1930s. Also new:

The crime thriller Terminal (2018, not rated) stars Dexter Fletcher and Max Irons as hitmen and Margot Robbie as the mystery woman who weaves through their lives.

The gory horror film Baskin (Turkey, 2016, not rated, with subtitles) sends a police squad to a Black Mass where they are transported to a virtual hell.

Reese Witherspoon stars in the romantic comedy Home Again (2017, PG-13) as a single mother who invites a handsome twentysomething (Nat Wolff) and his two brothers to share her vast Los Angeles home.

The Loft (2015, R), thriller about a murder in a secret love nest, stars Karl Urban, James Marsden, and Wentworth Miller as friends who quickly turn on one another.

TCM Select Pick of the Week is Arsenic and Old Lace (1944), Frank Capra’s Hollywood take on the hit Broadway comedy about a pair of dotty old sisters who poison lonely old men (out of compassion, of course). Raymond Massey (taking the role created on stage by Boris Karloff) is the homicidal back sheep nephew who escapes prison to compete with the old ladies in the body count department. Cary Grant gets top billing as the nice boy nephew whose plans to marry Priscilla Lane get thrown off track by his family shenanigans and he makes the most of his double takes and wide-eyed reaction shots. But he’s basically straight man to the inmates running his family asylum and frankly upstaged by the sweetly fussy hens Josephine Hull and Jean Adair and by Peter Lorre as Massey’s comically creepy sidekick. It’s like Capra’s earlier eccentric family comedy You Can’t Take it With You with gallows humor meeting Capra’s bright, plucky sensibility, making it quite possibly the funniest serial killer comedy ever made. Streams through December 27.

The documentary Hitler’s Hollywood (Germany, 2017, not rated, with subtitles), a survey of the glossy escapist films made in Germany under Joseph Goebbels, the Minister of Propaganda during Hitler’s reign, debuts along with a selection of cited movies (including the fantasy Münchhausen, 1943, and disaster film Titanic, 1943) and the documentaries The Wonderful, Horrible Life of Leni Riefenstahl (1993) and Harlan: In the Shadow of Jew Süss (2008, not rated, with subtitles). All from Germany with subtitles, not rated).

Also new: “Actor of the Week: Max von Sydow” is celebrated with 17 features from Sweden (including collaborations with Ingmar Bergman) and the U.S. spanning 40 years, plus five films by “Director of the Week: Peter Hyams” and four featuring “Cinematography by John Alcott.”

The second series of the comic police procedural No Offence, starring Joanna Scanlan and Elaine Cassidy, puts the Manchester cops against a Nigerian crime matriarch.

Also new are Love Hurts: Series 1, a romantic drama from the 1990s with Zoë Wanamaker, and the complete Mr. Palfrey of Westminster, a domestic spy drama from the 1980s starring Alec McCowen.