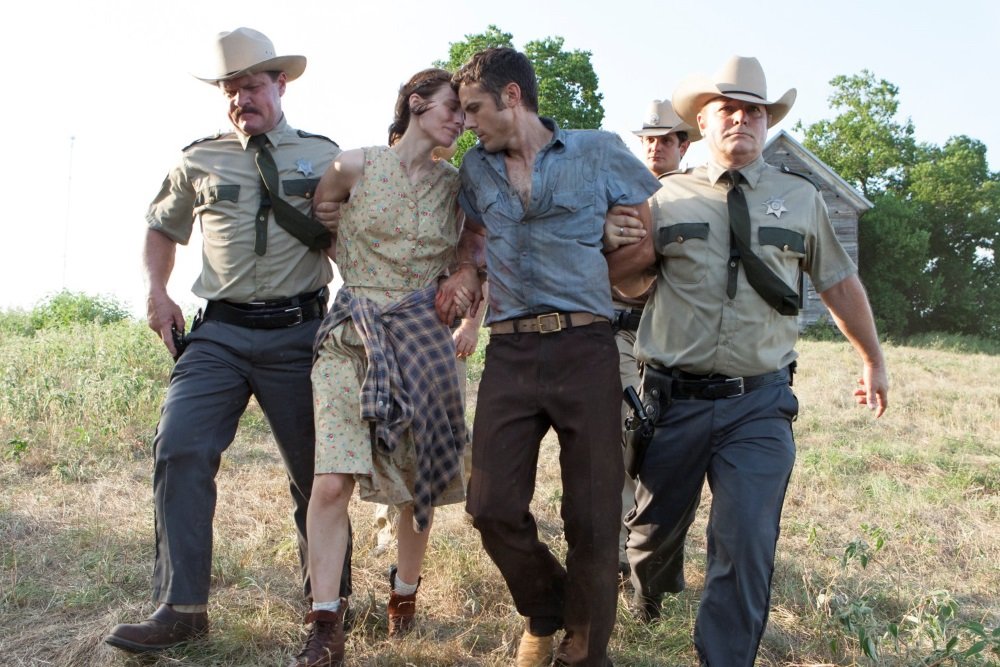 Rooney Mara and Casey Affleck play lovers Ruth and Bob, young adults who grew up fast under the watch of dubious father figure Skerrit (Keith Carradine) and ended up as small-time hold-up cowboys with a pick-up in place of a horse. Their world is sketched in with impressionistic snapshots, a mix of romantic hope and a doomed trajectory that ends in a shoot-out in an abandoned shack that looks like it’s been standing since the end of the old west, a prison term for Bob, and Ruth raising their daughter as a single mother, looked after by Skerrit and looked in on by the lovesick policeman (Ben Foster) wounded in the shoot-out. It’s a delicate equilibrium that threatens to teeter over when Bob decides he can’t live without seeing her and escapes lockup.

Ruth and Bob are no Bonnie and Clyde—they aren’t ruthless criminals as much as kids born to the outlaw way of life in a culture without many alternatives—and Ain’t Them Bodies Saints isn’t above heists and crime sprees. It’s a character piece about the foolish things people do for love, directed from a script that plays as if all the exposition has been edited out of it.

Lowery’s filmmaking is assured, with a portrait of rural Texas slipped out of time, straddling the entire era from the Great Depression to the seventies recession and smudging any clues that would definitively set the year. He has an attention to tone and atmosphere, to the nowness of the moment, letting it all settle into the image and the narrative, while the quality of light (from the magic hour exteriors to interiors lit by hurricane lamp and incandescent bulbs) warms the film while coloring it like a yellowed memory.

Comparisons to Terrence Malick are not misplaced, but this has more in common with Robert Altman’s Thieves Like Us than Badlands, with Affleck as both a wild kid and cold killer and Mara as devoted mother and lover balancing her heart’s desire with her realist’s understanding of how his desperate prison escape is destined to end. For all the poetry of his filmmaking, this isn’t the romance of outlaw innocents on the run. This life doesn’t offer happy endings, but these people do have a kindness and compassion that makes the effort worthwhile.

It won the cinematography award at the Sundance Film Festival.

, iTunes, GooglePlay and/or other services. Availability may vary by service.
Ain’t Them Bodies Saints [Blu-ray]