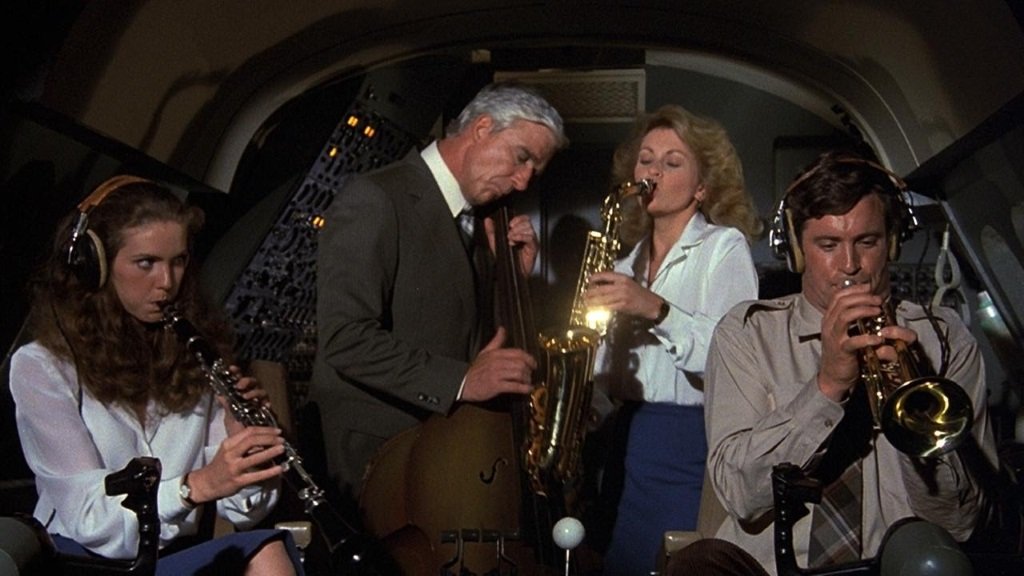 Airplane! (1980, PG), the directorial debut of the writing/directing team of David Zucker, Jerry Zucker, and Jim Abrahams (who apprenticed on the screenplay of Kentucky Fried Movie), has my vote for the funniest film ever made.

Ostensibly a goof on the barely remembered 1957 aviation thriller Zero Hour! (note the exclamation mark) by way of the Airport disaster franchise, it’s lively collision of old school vaudeville and anything goes comic absurdity delivered with crackpot creativity and the juvenile glee of “Mad” magazine on speed. They lob gags at everyone in the audience from 7 to 70 and don’t bother waiting for anyone to catch up.

The plot—with shell-shocked fighter pilot (Robert Hays) plucked from his passenger seat to fly an airliner when food poisoning lays the crew low—is the cinematic equivalent of a bullseye mark. The ZAZ boys unleash madcap sight gags and demented dialogue with a machine gun delivery—fast and sloppy and unrelenting—and sees what hits the target. Nothing is too much or too absurd (“When Kramer hears about this, the shit is really going to hit the fan”).

But it’s the deadpan delivery of ridiculous non-sequitors by the likes of Peter Graves (“Joey, have you ever been in a Turkish prison?”), Lloyd Bridges, Leslie Nielson, and “Leave It to Beaver” mom Barbara Billingsley (who, luckily for us, speaks jive), and the stone-faced intensity of Robert Stack, who delivers his lines like he’s chewing rocks and spitting out gravel, that sends the comedy into bizarro Nirvana. It’s as if the Looney Tunes gang broke into the Warner Bros. drama unit sometime in the fifties and doodled over the studio’s latest humorless thriller.

Julie Haggerty is the stewardess girlfriend Hays tries to win back, Kareem Abdul-Jabbar is co-pilot, and Stephen Strucker almost steals the film as the dotty air control prankster whose goofball antics and arbitrary outbursts seem to boomerang in from the Twilight Zone, but no one else mugs for a laugh here, not even Leslie Nielson, who eventually forgot that it’s funnier when you keep a straight face. Even the score by Elmer Bernstein plays it straight, pounding out a state of high tension that the directors deflate with every giggle.

Is it the best comedy ever made? I don’t know, but it surely is the funniest. I stand by that. And don’t call me Shirley.

It was added to the National Film Registry in 2010.

, iTunes, GooglePlay and/or other services. Availability may vary by service.
Airplane! [Blu-ray]

Blu-ray and DVD with commentary by David Zucker, Jerry Zucker, and Jim Abrahams and producer Jon Davidson. The “Don’t Call Me Shirley” special edition also features an optional subtitle trivia track and the extended “Long Haul Version,” a combination expanded version and interactive experience that uses branching video to insert not just deleted scenes (“Nothing we cut out is funny,” warns the directors in the introduction to the first deleted scene) but video comments and reminiscences by the directors, actors (from Robert Hays and Peter Graves to some of the minor players), and members of the crew.