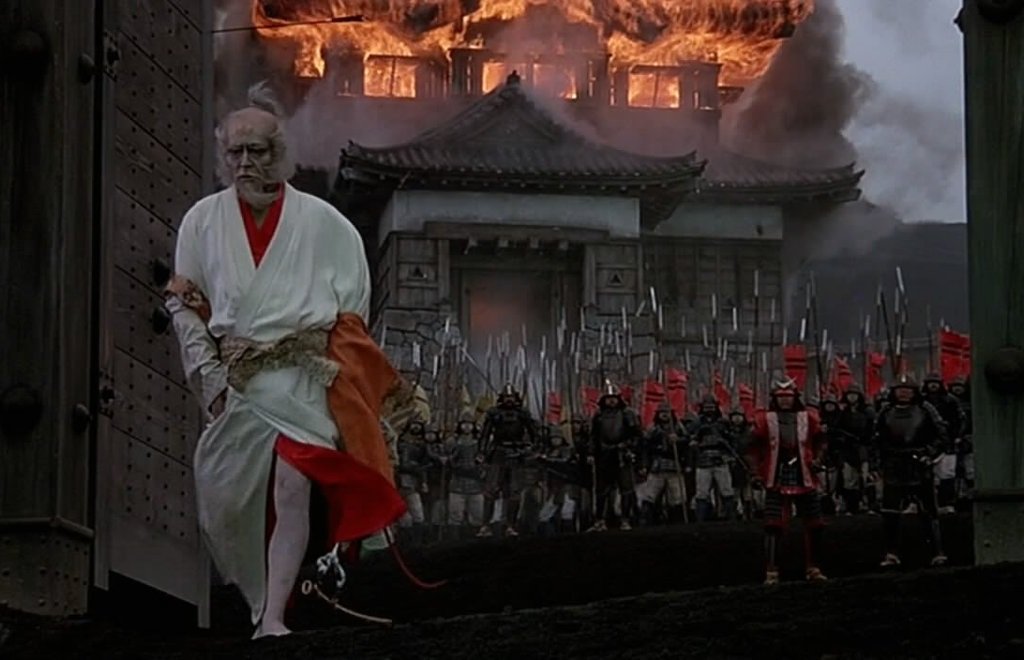 Akira Kurosawa Ran (Japan, 1985), the story of an aging warlord who hands power to his sons is loosely inspired by the story of sixteenth century warlord Mōri Motonari, who conquered his rivals and extended his kingdom with the help of his three sons. The script, however, is firmly built on King Lear, with sons taking the place of the daughters in Shakespeare’s play.

Seventy-year-old Lord Hidetori Ichimonji (Tatsuya Nakadai) hands his throne to his eldest son Taro (Akira Terao) and his two other castles to the younger sons in support Taro. Saburo (Daisuke Ryû), the youngest, is banished when he protests this rash decision and questions the loyalty of his brothers, but his honesty and devotion is appreciated by a fellow warlord who gives him a home. Meanwhile the two elder sons, who professed their fealty most passionately, betray the old man and one another as they scheme to take total control. Like Lear, Hidetori is accompanied by his own fool, the singer and entertainer Kyoami (played by Peter, a popular Japanese TV comic and drag queen), who remains by his side as the sons strip him of pride and dignity, leading to madness.

The siege on the castle where Hidetori has taken refuge is one of the most spectacular and devastating sequences in Kurosawa’s career. The castle stands out boldly against the stark black mountainside of the slopes of Mt. Fuji and Kurosawa marshaled 250 horses and 1,400 extras for the battle. His use of color is both narratively ingenious and visually stunning, with the two armies identified by their clan colors (one flying red banners, the other yellow) as they snake across the battlefield like streamers. Kurosawa frames it in long shot like a larger-than-life game of Risk by way of an epic ballet, then moves in to survey the brutality in closer and closer shots. He conducts the sound masterfully, dropping out the thunder of hooves and the clash of weapons and bringing Tôru Takemitsu’s somber score to the foreground. It becomes both dreamy and nightmarish as the viewer is plunged into the battle and witnesses the terror of Hidetori as arrows slaughter his retinue and fire rages around him. Then the sound of battle abruptly returns with the crack of a single gunshot, a startling punctuation that announces yet another betrayal and a sudden shift in the balance of power.

Kurosawa is not merely true to Shakespeare’s story, he brings scenes alive with a cultural twist and a visual mastery, from the pageantry of warriors filling vast fields of green with red and white flags and uniforms to the howling storm that strikes during the warlord’s spiral into madness. The spectacle is brought home with delicately observed performances and beautifully sculpted relationships, an intimacy that gives the epic its soul.

Ran wasn’t Kurosawa’s final film but it is in many ways the culmination of his career, a powerful epic with a magnificent sense of scale, executed with a painter’s eye and brought to life with delicately observed performances and relationships that give the spectacle an intimacy. Kurosawa offers a visual presentation to match Shakespeare’s verse.

Though it was not even entered by Japan in the foreign language category at the Academy Awards, it received nominations for Kurosawa’s direction and for the film’s exacting cinematography and won the Oscar for costume design, one of many awards it earned around the world.

and other services. Availability may vary by service.
Ran (StudioCanal Collection) [Blu-ray]

Lionsgate’s Blu-ray and DVD, part of its “StudioCanal Collection,” presents a very good master with stronger colors than have been seen on any previous home video edition and a solid collection of supplements, including Chris Marker’s 1985 documentary A.K. (a profile of Kurosawa on the set of Ran) and the original retrospective documentary Akira Kurosawa: The Epic and the Intimate (both French productions), plus documentaries on samurai art and culture and a booklet with an essay by critic David Jenkins.