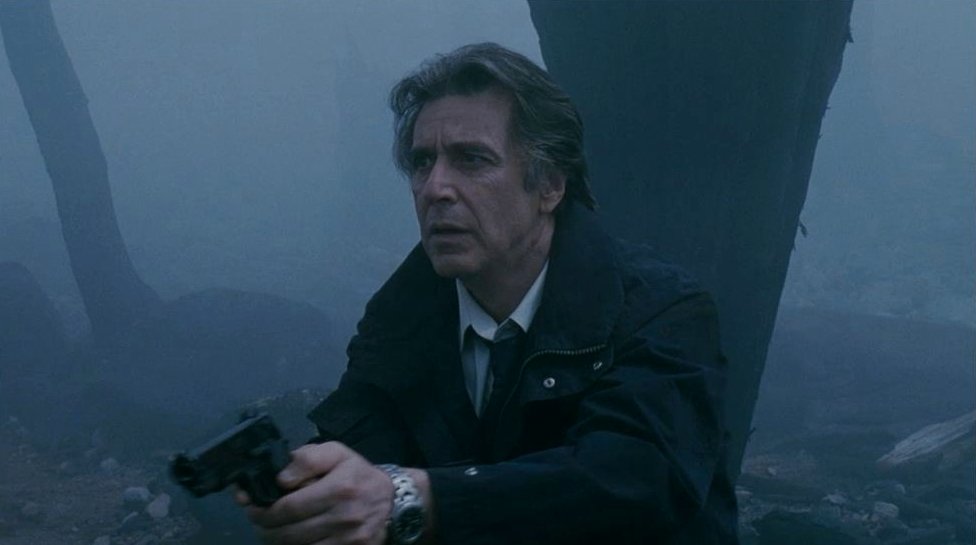 Between his breakthrough hit Memento and his blockbuster smash Batman Begins, Christopher Nolan helmed Insomnia (2002), the American remake of the icy, sun-bright 1997 Norwegian noir. Relocated to Alaska and starring Al Pacino in the role played by Stellan Skarsgård in the original, it’s built on the same motif: the 24 hour daylight of the Arctic summer as the unblinking light of truth.

Pacino plays L.A. cop Will Dormer, who arrives gaunt, tired and sleepy-eyed to a quiet Alaskan village to investigate a murder. He’s under investigation back home and the assignment is an escape of sorts, but guilt follows him north and his eyes just get blearier and more hollowed out as he’s kept awake by the rays blasting through his hotel window, a visual scream that burns through to his conscience.

Nolan shifts the moral ground from the snowballing moral corruption of the original to shades of guilt and accountability and Pacino’s increasingly bleary and hallucinatory perspective becomes an evocative metaphor for his struggle.

Robin Williams is unexpectedly chilling as the self-pitying suspect who blackmails Dormer with damning evidence (his explanations and justifications make him all the more unsettling and creepy). Hilary Swank has a more thankless role as a hero-worshipping rookie investigator on hand largely to play angel to William’s devil, but she pulls it off and Martin Donovan is Dormer’s doomed partner.

Don’t expect a nail-biter: the moody style creates action scenes more evocative and entrancing than adrenaline pumping, but it features evocative imagery, a compelling story, and one of Pacino’s best performances of the 21st century.

, iTunes, GooglePlay and/or other services. Availability may vary by service.
Insomnia (2002) [Blu-ray]

The Blu-ray and DVD editions get an impressive collection of supplements. The commentary track by director Christopher Nolan presents the scenes in the order the film was shot (and accompanying subtitles counting up the production days and identifying the scene numbers). It may sound like a high-concept gimmick but it becomes an interesting way to experience the physical realities of film production while Nolan’s comments speaks volumes about the relationship between the creative and the production process. A second track is edited from the comments of Hilary Swank, screenwriter Hillary Seitz, cinematographer Wally Pfister, editor Dody Dorn, and production designer Nathan Crowley, which can all be experienced separately (click a name and jump directly the scenes they discuss). Also includes the interview featurette “180°: A Conversation with Christopher Nolan and Al Pacino” (Pacino, in all his relaxed regality, naturally becomes host, Master of Ceremonies, and interviewer), the too-brief 8 minute “Day For Night: The Making of Insomnia” and accompanying 5 minute production peaks “In the Fog” (featuring director of photography Wally Pfister and production designer Nathan Crowley each discussing their work and commenting on behind-the-scenes footage), the 7 ½ minute “Eyes Wide Open” (about insomnia: the sleep disorder), an extended scene with optional director’s commentary, a gallery stills, and the trailer.