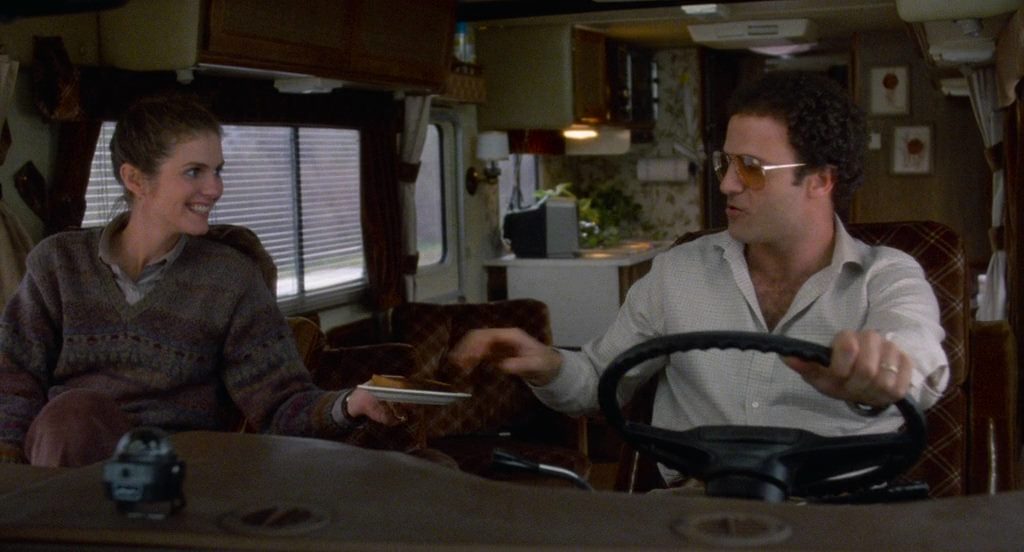 Albert Brooks has been making his offbeat brand of satirical comedies about the neuroses and anxieties of affluent Americans, lost in the bubble of their own insular cultures, for more than 40 years. His third feature Lost in America (1985) remains his most incisive satire and most popular film.

Brooks is David, a successful Los Angeles ad executive who abruptly quits his job after being passed over for promotion and reassigned to New York City, and he coaxes his wife (Julie Hagerty) to follow suit. They fancy themselves the modern version of the Easy Rider characters and drop out of society to travel across America and “find themselves” while living in the comfort of a deluxe Winnebago and living off a cushion of over $100,000. Once that “nest egg” (the phrase becomes a mantra) is lost in a night of gambling fever in Las Vegas, it becomes an anti-road movie: everything unravels and they long for their old, materialistic lives. Fellow director Garry Marshall is memorable as a casino manager one of the film’s greatest scenes.

Brooks has a low-key approach to comedy, digging into uncomfortable situations and awkward confrontations, and he slowly works his way into what becomes a hilarious take on mid-life crisis and disillusioned yuppies. It remains one of the great satires of eighties materialism and the comfort zone of the affluent urban American.

Criterion presents the Blu-ray debut and new DVD special edition from a new restoration supervised by the director. It features an extensive 30-minute interview with Albert Brooks plus new interviews with actress Julie Hagerty, executive producer Herb Nanas, and filmmaker and screenwriter James L. Brooks (no relation), who cast Brooks in “Broadcast News.”