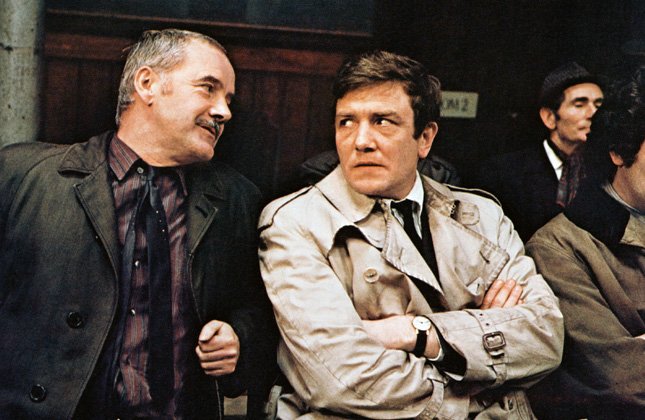 So proclaims Eddie Ginley (Albert Finney), a small-time bingo caller and wannabe stand-up comic, to his therapist in the opening scene of Gumshoe (1971). But he’ll settle for running an ad in the local paper offering his services as a private detective (no divorce cases), his present to himself for his 31st birthday. When he gets a call from a client, he just assumes his buddies are playing along for a laugh, but the package he gets from The Fat Man includes ₤1,000, a picture of a girl, and a gun. Eddie’s no PI and he knows it, but when his brother gets him canned from his only paying gig, there’s nothing stopping him from following the trail to the end of the line.

Eddie’s the kind of guy who can’t help but slip into hard-boiled patter (delivered with a touch of Bogie) when the opportunity arises, even if he’s clad in BVDs and a ratty bathrobe and devouring a bowl of cold cereal between his tough-guy cracks. It’s the kind of touch that makes Eddie Gimley so genuine and Finney plays him as a regular bloke with a non-stop sense of whimsy, a smart retort for occasion, and a penchant for narrating his story in the vernacular of an American wise guy. Even his simmering antipathy for his snobbish big brother (Frank Finlay), an arrogant twit who stole Eddie’s girl (Billie Whitelaw) and quite possibly the family business, doesn’t stop him lobbing cracks and insults in their brotherly bonding sessions.

Frears roots the film in the dreary atmosphere of working-class Liverpool, where the folks escape the industrial grime in “The Broadway Club,” a cheap music hall where the locals gather to eat, drink and enjoy the entertainment between rounds of bingo. It may be a shabby place, but Frears never stoops to ridicule the audience or the entertainers. The club boss (Bill Dean), a semi-connected guy whose affection for Eddie emerges from the banter, is a real character cut from the same cloth: the photos of show-biz royalty posing with him are all lovingly-produced fakes. No wonder he has such a soft-spot for Eddie. They both play out their dreams in harmless games.

When the case turns downright dangerous, there’s a bit of shamus chivalry in Eddie’s act, as if the trenchcoat and hard-boiled affectation gives him the courage and the determination to play the hero for once. He knows the score, but that doesn’t mean he can’t have a little fun while he plays out his hand.

On Blu-ray in a region-free edition from the British label Powerhouse and on DVD from Sony Home Video.