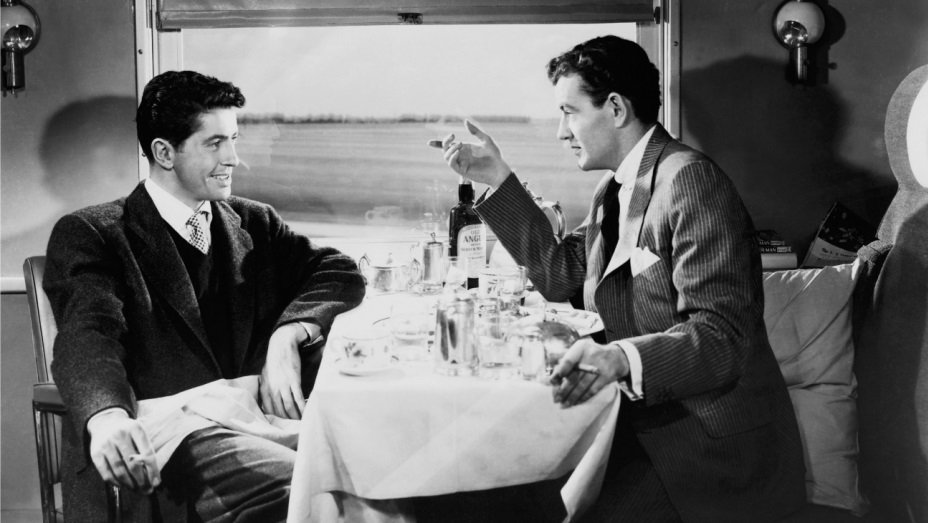 Strangers on a Train (1951) is one of Alfred Hitchcock’s undisputed masterpieces, a thriller of demented wish fulfillment turned into a waking nightmare that turns on a chance meeting.

Demented playboy Bruno (Robert Walker, whose insidious insincerity is unsettling from his first scene) meets champion tennis player Guy (Farley Granger). Bruno knows that Guy has marriage problems (he wants out of a loveless marriage to marry Senator’s daughter Ruth Roman, but his wife to refuses to grant a divorce) and, as fate would have it, Bruno would like his father out of the way. So he spins a story of swapping murders—the perfect crime, since there would be nothing to connect either man to the victim.

Guy laughs it off to get rid of this pushy fan with stalker undertones. Then Bruno proceeds to kill the troublesome wife and insists Guy return the favor… or else. Hitch loved dark doubles and this is his most sociopathic shadow.

Scripted by Raymond Chandler from the novel by Patricia Highsmith (a master of psychopathic characters and warped psychologies), it’s masterfully constructed and perfectly cast. Granger is the weakest of Hitchcock hero’s, and appropriately so as he faces the prospect of his darkest wish coming true, and Walker’s psychopathic intensity is icy and obsessive, the opposite of Granger’s nervousness.

Walker has the film’s best moment as Bruno stares at Guy, the lone unmoving head in a crowd nodding back and forth with the volley of the tennis match. It’s one of the most ingenious and memorable images in a career of brilliant cinematic moments, and one of the most unsettling.

Not rated, in black and white.

, iTunes, GooglePlay, Fandango, Vudu and/or other services. Availability may vary by service.
Strangers On A Train [Blu-ray]

The Blu-ray and Two-Disc DVD Special Editions feature both the original theatrical version and the slightly longer preview version, which plays up the homoerotic aspects of Bruno and his attraction to Guy. It played theatrically in Britain but disappeared until it was rediscovered in 1991. Also features commentary on the theatrical version by director Peter Bogdanovich, Psycho screenwriter Joseph Stephano, Patricia Highsmith biographer Andrew Wilson, and others (including audio clips of Hitchcock from archival interviews), the retrospective documentary Strangers on a Train: A Hitchcock Classic (with Farley Granger, film historian Richard Schickel, and Patricia Hitchcock O’Connell, among others), the vintage newsreel “Alfred Hitchcock’s Historical Meeting,” and three featurettes: The Hitchcocks on Hitch, Strangers on a Train: The Victim’s P.O.V., and Strangers on a Train by M. Night Shyamalan.

Pingback: What to stream: Oscar winner 'The Favorite' on VOD, 'Juanita' and 'After Life' on Netflix, 'Sadie' on Amazon Prime Video - Stream On Demand
Comments are closed.