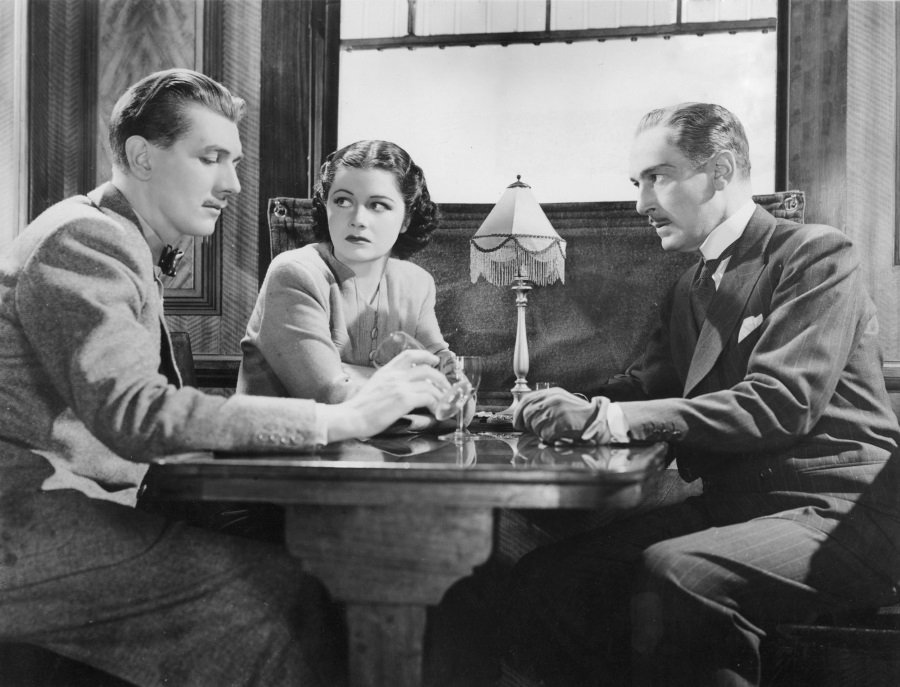 Hitchcock patented the romantic thriller with The Lady Vanishes (1938), a bright, breezy confection that takes his quirky cast (and the audience along with them) from an idyllic picture postcard of fantasy Europe to a nightmarish journey to the heart of the dark days of World War II that lay just ahead. This snappy, sophisticated romantic thriller begins innocently enough as a contingent of eccentric tourists spend the night in a picture postcard village inn nestled in the Swiss Alps before setting off on their train the next morning. In a wonderfully Hitchcockian twist on “meeting cute,” attractive young Iris (Margaret Lockwood) clashes with brash music ethnomusicologist Gilbert (Michael Redgrave) when his nocturnal concerts give her no peace. She gets him kicked out of his room so he barges in on hers.

It’s loathing at first brush, but those kinds of sparks ignite the fires of romance when they end up on the same train and team up to search for the kindly old Mrs. Froy (Dame May Whitty), a charming old spinster who no one seems to remember after she disappears from Iris’s train car without a trace. No one is as they seem but sorting out the villains from the merely mysterious is a challenge in itself as our innocents abroad face resistance from the entire passenger list.

Hitchcock effortlessly navigates this vivid thriller from light comedy to high tension and back again, creating one of his most enchanting and entertaining mysteries. The script by Sidney Gilliat and Frank Launder is tight and witty and filled with oddball characters, brought to life by a seasoned cast of character performers like Paul Lukas and Googie Withers. The show is almost stolen by Naunton Wayne and Basil Radford as twitty cricket fans Charters and Caldicott desperately searching for the latest scores (they reprised their characters in more than one film). Though this wasn’t Hitch’s final British film before departing for Hollywood (that honor goes to Jamaica Inn), I prefer to think of this as his fond farewell to the British Film Industry.

This is a film that you can find on almost any streaming service (it’s one of the free films on Hulu, with commercials) and all over YouTube, but those copies vary in quality and most are pretty awful and doused in hiss. The Netflix version looks and sounds great.

Also available to own on Criterion DVD and Blu-ray:
The Lady Vanishes [Criterion, DVD]

Any resemblance between Carol Reed’s Night Train to Munich (1940) and The Lady Vanishes is strictly intentional. Scripted by the same screenwriting team of Frank Launder and Sidney Gilliat and featuring leading Lady Margaret Lockwood, this thriller once again sets ordinary Brits (and in this case, they are posing as Austrian refugees) against the Nazis in the days just before Britain declares war on the Third Reich. Reed was a long ways from the confidence and mastery of The Third Man when he made this confection. He lacks Hitchcock’s deftness and light touch and even his energetic direction can’t distract from the weak script or the implausible plotting that tosses the characters back and forth across the continent so rapidly the actors have little room to breathe life into their roles.

What is does offer is a mix of wit and wiles, a genuinely startling sequence in a concentration camp (the grim reality of the Nazi occupation hangs over the entire enterprise) and sprightly performance by Rex Harrison as an engagingly cocky British agent who impersonates a Nazi officer to rescue prisoners from behind enemy lines. The extensive use of miniatures may look quaint and unconvincing to modern eyes, but the craft and detail has a charm and a beauty that modern movies sacrificed in the name of realism. Pre-Casablanca Paul Henried (credited here as Paul Von Henried) is a very effective as a concentration camp prisoner who masterminds the escape from the camp and into Britain and Basil Radford and Naunton Wayne recreate their roles from The Lady Vanishes as blasé British tourists traveling through Germany (when Britain declares war they worry about cricket and the golf clubs they left behind in Berlin; “I’ll never replace those,” sighs Radford).

Also available to own on DVD from Criterion:
Night Train to Munich [Criterion, DVD]

Criterion offers three reasons why The Lady Vanishes is worth your time.