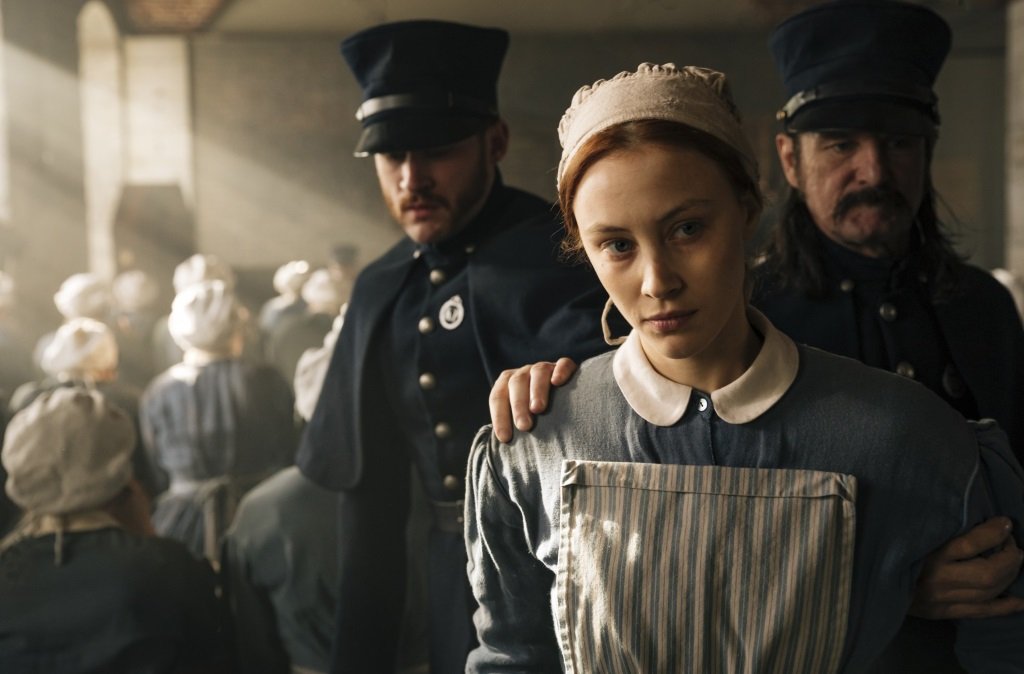 The Netflix original mini-series Alias Grace takes on the true story of a servant girl convicted of murder in 19th century Canada as reinterpreted by Margaret Atwood in her historical novel. Sarah Gadon plays Grace Marks, who has already served 16 years for the murders of a farmer (Paul Gross) and his housekeeper (Anna Paquin) with a young doctor (Edward Holcroft) is brought in to question her.

It “is a true-crime mystery in the form of an elliptical interrogation,” writes James Poniewozik for The New York Times. “Alias Grace is a story about storytelling — one character compares Grace with Scheherazade — which makes Ms. Gadon essential to its success. She is mesmerizing. She plays Grace convincingly as a timid child and a toughened inmate, and she brings both of them to Grace’s wary testimony.”

The six-episode series is scripted by Sarah Polley and directed by Mary Harron and it co-stars David Cronenberg. That makes two for two for Margaret Atwood in 2017, whose The Handmaid’s Tale became Hulu’s most acclaimed original program to date.

Idris Elba is the last Gunslinger and Matthew McConaughey is his evil nemesis in The Dark Tower (2017, PG-13 and unrated versions), based on the novel by Stephen King. Also on DVD and Blu-ray and at Redbox.

Kid stuff: Julia Roberts is the voice of Charlotte in Charlotte’s Web (2006, G) and Christina Ricci is a human girl who befriends a ghost child in Casper (1995, PG).

Stand-up: Judah Friedlander: America Is the Greatest Country in the United States.

Jeff Bridges is an alcoholic writer giving life lessons to a privileged teenager (Callum Turner) in the coming of age drama The Only Living Boy in New York (2017, R).

Streaming TV: the first season of the USA series Falling Water follows three characters whose lives are entwined by a shared dream. 10 episodes.

Get a start on your Christmas watchlist by adding the classic TV special Rudolph the Red Nosed Reindeer (1963).

Arrival (2016, PG-13), starring Amy Adams as a linguist making first contact with an alien race with no spoken language, is both a brainy science fiction drama and a touching human story. It was nominated for eight Academy Awards and filmmaker Denis Villeneuve went on to direct “Blade Runner 2049.” Now streaming on Amazon Prime and Hulu. Reviewed on Stream On Demand here.

Winter’s Bone (2010, R), a coming-of-age survival story set in the crime and poverty of the Ozark Mountains, features a superb break-out performance by Jennifer Lawrence and a rich sense of place and culture. It won the Grand Jury Prize winner at the Sundance Film Festival. Reviewed on Stream On Demand here.

Anne Hathaway is a different kind of Cinderella in Ella Enchanted (2004, PG), a playful twist on the classic fairy tale.

Jodie Foster’s Home for the Holidays (1995, PG-13) with Holly Hunter and Robert Downey Jr. is a comedy for the Thanksgiving family gathering.

Arnold Schwarzenegger is one of the good guys in James Cameron’s Terminator 2: Judgement Day (1991, R), which set the bar for movie special effects in its day.

James McAvoy is a kidnapper with multiple personalities in M. Night Shyamalan’s Split (2017, PG-13) and Anya Taylor Joy attempts to navigate the personalities to escape.

Arriving Saturday night is Jordan Peele’s Get Out (2017, R), a smart and successful mix of social satire, modern horror, and savvy commentary on race.

Criterion Channel premieres the John le Carré Cold War classic The Spy Who Came in from the Cold (1965, not rated) with Richard Burton and Alex Ross Perry’s Listen Up Philip” (2014, not rated) with Jason Schwartzman and Elisabeth Moss. And on the cult side there is the crazy, cross-dressing sixties spy comedy Black Lizard (Japan, 1968) from director Kinji Fukasaku.