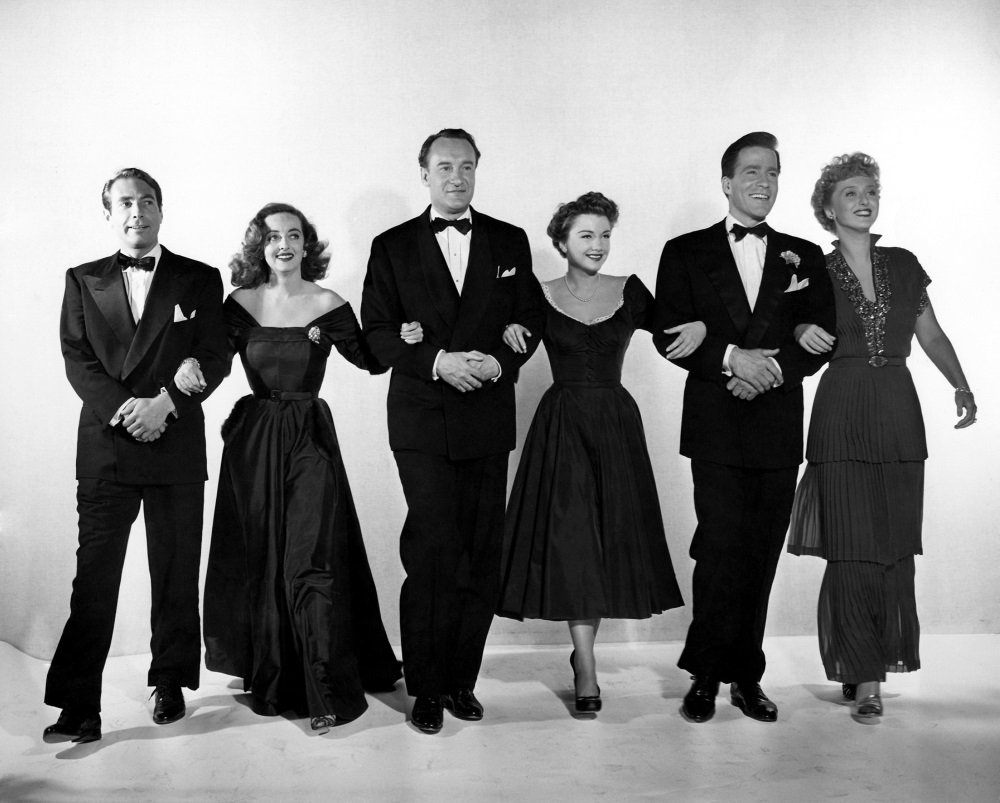 “Fasten your seat belts, it’s going to be a bumpy night.”

All About Eve (1950), Joseph L. Mankeiwicz’s acerbic view askance at the Great White Way, is the writer/director’s Citizen Kane, a little less complex perhaps, but masterful in its own way in its cynical portrait of ambition on the boards. The barbed dialogue is witty and wonderful, delivered with tart insolence by Bette Davis as Margo Channing, an aging Broadway lioness who watches ruthless cub Eve Harrington (Anne Baxter) pull out her claws as she purrs and insinuates herself into stardom.

Even more seductively sinister is George Sanders, marvelously acerbic as a cultured but conniving critic Addison DeWitt, whose every word oozes arsenic. In support is Celeste Holm as Margo’s best friend, Thelma Ritter as Margo’s straight-talking dresser, and Marilyn Monroe in an early career appearance as an ingénue under the paw of DeWitt.

It was nominated for a record 14 Academy Awards and went home with six, including Best Picture, Best Director and Best Screenplay (Mankeiwicz), and Best Supporting Actor (George Sanders).

All About Eve is one of the essentials, a Hollywood classic that delivers sophistication and wit to adult audiences. That kind of elegance is timeless.

, iTunes, Vudu, GooglePlay and/or other services. Availability may vary by service.
All About Eve [Blu-ray]

On DVD and Blu-ray with two commentary tracks, the 24 minute featurette “AMC Backstory: All About Eve,” archival promotional shorts, newsreel and TV footage. The two-disc special editions also includes four original featurettes. “Directed by Joseph Mankiewicz” and “Joseph L. Mankiewicz: A Personal Journey” are fairly conventional interview-based productions that outline the life and career of the writer/director with help from his sons (both film industry vets in their own right). Much juicier is “The Real Eve,” which reveals the real-life inspiration for the short story and the film with gossipy details. “The Secret of Sarah Siddons” (about the theatrical society inspired by the film) fills out the disc.