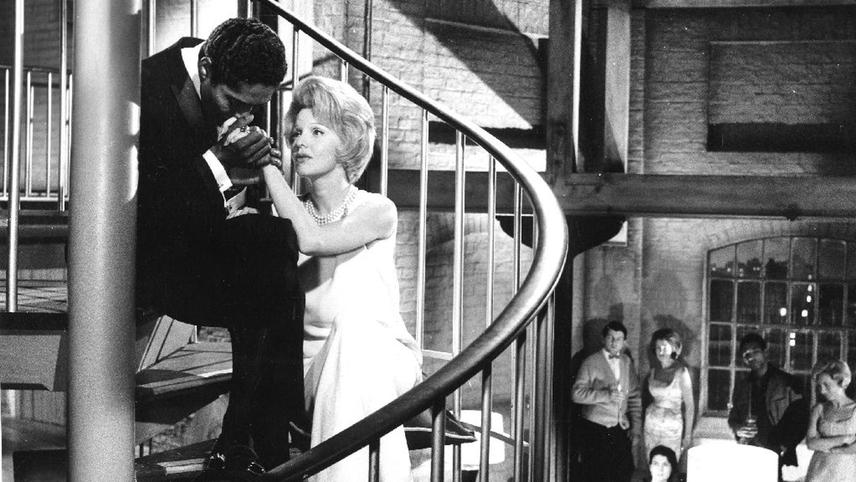 Set over the course of a single night in a sleek jazz club carved out of a waterfront warehouse (the passion of a jazz-loving millionaire played by Richard Attenborough), All Night Long (1962) reworks Shakespeare’s Othello for the 1960s jazz culture culture of musicians and singers and nightclub showbiz dealings. Iago here is America drummer Johnny Cousin (Patrick McGoohan), whose plan to leave the band of jazz royalty Aurelius Rex (Paul Harris) and led his own group pivots on signing Rex’s wife, retired singer Delia Lane (Marti Stevens), as his headliner. And that means breaking them up: planting doubts, fertilizing with liberal amounts of bullshit and watching the suspicion and mistrust and jealousy blossom (helped by a manipulated tape recording designed to seal the deal).

Set against an all-night jam session (featuring the likes of Dave Brubeck, Charlie Mingus, and Johnny Dankworth), filmmaker Basil Dearden sets the narrative rhythms to the music and uses fluid camerawork to keep the momentum through the limited locations. British workhorse director Dearden never established a strong cinematic personality like Michael Powell or the storytelling muscle (and powerful canvases to match) of David Lean, his two most distinctive contemporaries in the British film industry, but he had intelligence, craft, ambition, professionalism and the ability to rise to the challenge of his material with a compassionate portrait of his characters. There’s a tastefulness and a restraint that keeps a lid on the emotional pressure cooker of the repressed and repressive worlds he peeks in on, which only makes him seem all the more distinctly British.

He keeps a good beat here and directs the actors to a snappy rhythm. There’s not much subtlety to the performances—Harris has little dimension as the regal, elegant Aurelius and McGoohan plays Johnny with a jittery overeagerness, which fits the role (a schemer so caught up in his scheme that he loses sight of everything else) and the actor (he’s just so much fun to watch like this) but telegraphs his character a little too obviously. But the elegance of the camerawork, the machinations of the plot and the fun of seeing these musicians performing onscreen keeps the film involving. And, most interestingly, the film never addresses race in the issues of the mixed couples, directly or indirectly. This cosmopolitan culture thinks little of race or class. They pay attention to talent. And, of course, success.

On DVD in the box set Basil Dearden’s London Underground from Criterion’s budget label Eclipse with three additional film by Dearden: Sapphire (1959), Victim (1961) with Dirk Bogarde, and All Night Long (1962) with Patrick McGoohan. No supplements but there are informative liner notes on each film.