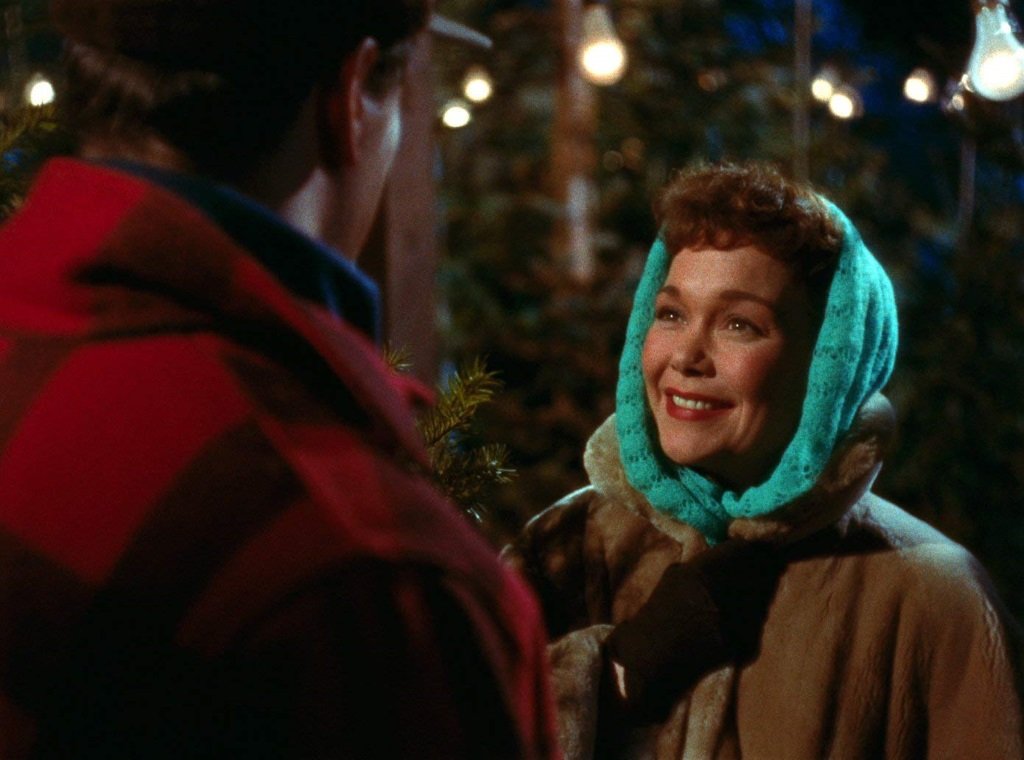 Rock Hudson and Jane Wyman were so successful in Douglas Sirk’s Magnificent Obsession that they all reteamed for All that Heaven Allows (1955) as Sirk became Universal’s house melodramatist. He turned improbable plots into social commentary and pulling back the covers of middle class hypocrisy with an ironic visual style and an almost operatic emotional pitch. All The Heaven Allows is one of his grandest films, charting the “forbidden” romance of a middle class widow and society matron with her much younger gardener.

Young hunk Rock is a strapping son of mother nature, a beefcake naturalist who woos middle aged, middle class widow Wyman to the snooty disapproval of her conservative social circle and embarrassment of her self-centered children. Wyman discovers a new life with his open-armed friends and back-to-nature lifestyle, but struggles with life-changing decisions in the face of social pressure and vicious gossip (the always excellent Agnes Mooorehead is part of the clucking suburban chorus).

Living the Henry Thoreau dream, Rock’s personal Walden is a rustic country cabin by a bubbling brook, a dream house lit by a giant picture window overlooking an idyllic countryside where deer pose just outside the window. Wyman’s elegant but sterile suburban home transforms into a tomb after she sacrifices her love for the “good name” of her children and they in turn abandon her to the trappings of lonely respectability. She sees her future in the pale, colorless reflection of the TV screen her kids give her as a consolation prize. But don’t despair just yet: Sirk’s heroine’s are dynamic and resourceful and no Sirk melodrama ends without a heart-tugging, over-the-top twist.

True to form, Sirk centers the film on his heroine. Hudson is really a dimensionless character, part saint and part socially-oblivious idealist. For all his understanding of life, he forgets how it takes someone to make the leap, especially someone with ties. It’s Wyman who goes through the emotional crisis and emerges the dynamic character, and she gives a marvelous performance.

German director Rainer Werner Fassbinder, who championed up Sirk as a master and a mentor, remade the film as Ali: Fear Eats the Soul decades later.

The film was added to the National Film Registry in 1995.

, iTunes, GooglePlay and/or other services. Availability may vary by service.
All That Heaven Allows (Criterion Collection) [Blu-ray + DVD]