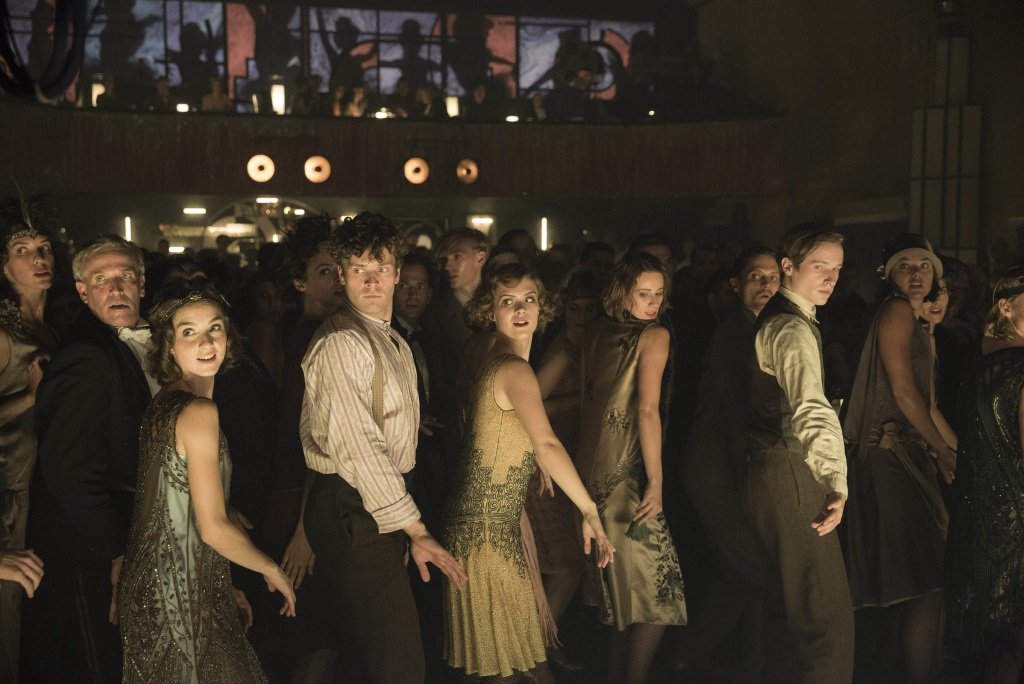 Babylon Berlin (Germany, with subtitles), a lavish limited series crime drama set in the decadence and depression 1929 Weimar Germany, is based on the detective novels of Volker Kutscher and developed for German TV by Tom Tykwer, who also directs. It’s high-end detective fiction against the sprawling backdrop of the end of Weimer before the Nazis took over, and it’s the most expensive production made for German television to date. I’ve only seen the first two episodes but I was hooked after the first and committed after the second.

It is “lavish, epic, dizzyingly complex, and (through the four episodes sent to me early) as satisfying as anything I’ve seen in months. It’s the most bingeable new drama since The Crown,” proclaims Taylor Antrim for Vogue. “It’s also similarly expensive. One of the immediate pleasures of this sprawling crime story set in 1929 Weimar Republic Berlin—which is full of unknown-to-me, hugely talented German actors and has as thickly braided a plot as a Tolstoy novel—is the millions thrown at the screen (it’s reportedly the most expensive German-language show ever made).”

16 episodes streaming on Netflix. Queue it up!

The Netflix original science fiction series Altered Carbon is based on the cyberpunk novel by Richard K. Morgan but looks like it’s modeled on “Blade Runner.” Set in a future where human consciousness can be preserved and resurrected in new bodies, it stars Joel Kinnaman stars as a detective brought back from cold storage to solve the murder of a 25th century bazillionaire who now resides in a clone backup.

“Altered Carbon is often ridiculous, but damned if it isn’t the best-looking series Netflix has yet produced,” cheers AV Club TV critic Alex McLevy. “All of this stellar design (the show should probably be paying Blade Runner some licensing fees for borrowing its visual flavor) is in service of a story so convoluted that even the Metal Gear Solid series would recoil in distaste.”

10 episodes now streaming on Netflix. Queue it up!

Stana Katic is an FBI agent released after six years captive by persons unknown in Absentia, a spy thriller making its U.S. debut on Amazon Prime. The twisty mind-game mystery sends her seeking answers while she becomes a suspect in a serial killer case. 10 episodes on Amazon Prime.

On Body and Soul (Hungary, 2017, not rated, with subtitles), nominated for an Oscar in the foreign language film category, is the first feature from Ildikó Enyedi in twenty years. It makes its U.S. debut on Netflix.

Professor Marston and the Wonder Women (2017, R) tells the strange but true (if somewhat embellished) story of the Harvard psychologist and outspoken feminist (Luke Evans) who created the first female superhero with the two women (Rebecca Hall and Bella Heathcote) he made his unconventional life with. Not a superhero film for kids. Reviewed on Stream On Demand here.

Steve Carell, Bryan Cranston, and Laurence Fishburne are three Vietnam vets on a road trip to bury the son of a friend killed in combat in Last Flag Flying (2017, R) from director Richard Linklater.

Available same day as select theaters nationwide are the action dramas Lies We Tell (2018, not rated) with Gabriel Byrne and Harvey Keitel and Braven (2018, R) with Jason Momoa and the documentary The Cage Fighter (2018, not rated) about a blue collar worker (Joe Carman) who continues the punishing sport to the neglect of his family and his own well-being.

Kathryn Bigelow became the first woman to win the Academy Award for direction with The Hurt Locker (2008, R), the Iraq war drama that won a total of six Oscars. It’s also new to Hulu. Reviewed on Stream On Demand here.

Martin Scorsese’s GoodFellas (1990, R) was the filmmaker’s biggest hit in years and the greatest American gangster film since The Godfather.

And for kids and families, Cars 3 (2017, G) takes one more lap with Lightning McQueen around Pixar’s animated franchise of talking race cars. Streaming on Netflix.

Streaming TV: Retribution: Season 1, a four-part British crime drama originally titled One of Us, stars Laura Fraser as a detective looking into a murder connected to feuding families in the Scotland highlands. Also new:

A new batch of films were added to the library on the first of the month. Here are a few notable titles:

True stories: The Force (2017, not rated) looks at efforts to reform Oakland’s police department and How the Beatles Changed the World (2017, TV-PG) looks at the social, cultural, and musical impact of the Fab Four.

Stand-up: from Malaysia comes Fakkah Fuzz: Almost Banned Singapore (in English) and Kavin Jay: Everybody Calm Down! (in Malay with subtitles).

A widower (Menashe Lustig) in Brooklyn’s Orthodox Jewish community battles custom and Talmudic law for custody of his son in the Yiddish-language drama Menashe (2017, PG, with subtitles).

Nostalgia: The long-running comic strip Blondie was brought to the big screen with Penny Singleton as Blondie and Arthur Lake as Dagwood in Blondie (1938), the first in a long-running series of B-movie comedies for Columbia Pictures. Amazon Prime has almost a dozen of the comedies, including Blondie on a Budget (1940) co-starring Rita Hayworth and Blondie Plays Cupid (1940) with Glenn Ford.

A clever twist on the vampire movie, Daybreakers (2009, R) (Amazon Prime and Hulu) offers a world where the vampires rule as their blood supply (the human race) is dying off. Ethan Hawke and Willem Dafoe star.

Brian Cox is the first Hannibal Lecter on the screen in Manhunter (1986, R) (Amazon Prime and Hulu), Michael Mann’s adaptation of “Red Dragon” with William Petersen as Will Graham.

True stories: Beside Bowie: The Mick Ronson Story (2017, not rated) delves into the guitarist’s contribution to David Bowie’s classic albums of the early seventies (Amazon Prime and Hulu).

Foreign affairs:  Amelie (France, 2001, R, with subtitles) made a star of Audrey Tautou.

Jessica Williams and Phoebe Robinson are 2 Dope Queens in the four-part comedy series inspired by their hit podcast. New episodes every Friday night in February.

Demetrius Shipp Jr. is Tupac Shakur in the musical biopic All Eyez on Me (2017, R).

For families: the comedy Diary of a Wimpy Kid: The Long Haul (2017, PG) sends the Heffley clan on a road trip and E.T. the Extra-Terrestrial (1982, PG) give audiences another chance to phone home.

True stories: May It Last: A Portrait of the Avett Brothers (2018, not rated) profiles the Grammy-nominated folk rock / Americana band and the documentary short The Number on Great-Grandpa’s Arm (2018, not rated) offers a personal perspective on the Holocaust.

Older films returning to HBO include:

Zoe Lister-Jones and Adam Pally star in Band Aid (2017, R), a comedy about a married couple who start a band as a form of therapy.

Classics can be fun. Lose yourself in four screwball comedies by Howard Hawks featured on FilmStruck. Cary Grant is straight man to Katharine Hepburn in Bringing Up Baby (1938) and con man to Rosalind Russell in His Girl Friday (1940) (reviewed on Stream On Demand here), plus there’s Twentieth Century (1934) with Carole Lombard and John Barrymore and Ball of Fire (1941) with Barbara Stanwyck and Gary Cooper. They’ll be around for the next six months.