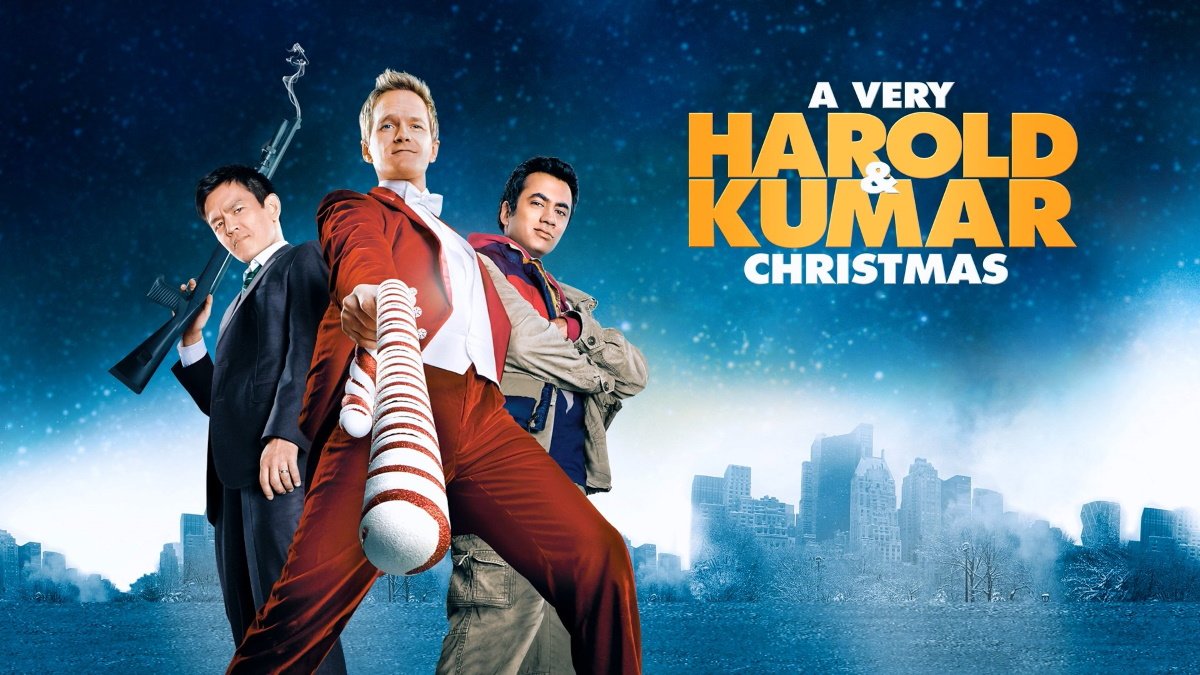 Yes, yes, we all know that Die Hard is has become the go-to Christmas movie for a couple of generations but what about the other alternatives to the familiar picks? Try these out for future non-traditional holiday traditions.

A Very Harold & Kumar Christmas (2011, R) is a holiday odyssey that lives up to the reputation of the stoner comedy series starring John Cho and Kal Penn. Which means there is copious smoking, an insane amount of other illegal substances (some of them directed to a toddler who takes on almost superhuman powers between giggling fits), rampant racial jokes, a clay animation interlude, and Neil Patrick Harris back in action as a sleazy, sex-addicted, crack-smoking miscreant… and that’s after his big song and dance number with the Radio City Music Hall Rockettes! It was originally released in 3D and the blatant way the film throws anything and everything at the screen is almost funnier in 2D, as the pure visual exploitation is even more obvious. (HBO Max)

Rare Exports: A Christmas Tale (Finland, 2010, R, with subtitles) may come from the land of the original Father Christmas but this wild Santa Claus is a child-snatching demon who punishes the naughty with the help of his army of naked, scraggly old men elves: the Father Christmases of the wild. You could say it’s a black comedy but writer/director Jalmari Helander directs it like a surreal action thriller in the isolated frozen north, playing deadpan tension and horror thriller situations for dark humor and putting a tow-headed little kid taking charge like an action hero with entrepreneurial spirit. (Hulu and Shudder, and free on Kanopy and Hoopla)

A Christmas fantasy set in the modern world of urban homelessness and social drop-outs, Satoshi Kon’s Tokyo Godfathers (Japan, 2003, PG-13, in Japanese with English subtitles) is unusual even for Japanese animation. His tart yet sentimental remake of John Ford’s Three Godfathers turns the trio of cowboys into a makeshift homeless “family”—threadbare drag queen Hana, grumbling alcoholic Gin, and brooding, sassy teenage runaway Miyuki—who find an infant abandoned amidst a pile of refuse in a snowy alley on Christmas Eve. It’s really a film about family, traditional and non-traditional. The miracles that this baby bestows on the trio can be explained away as coincidences, but the reunions and sacrifices are nonetheless healing and heartwarming. (Free on Hoopla)

The most unusual, eccentric, and unbelievable Christmas songs ever released are celebrated in Jingle Bell Rocks! (2014, not rated). Christmas music aficionado Mitchell Kezin celebrates forgotten greats (Nat King Cole’s devastating “The Little Boy that Santa Claus Forgot,” the director’s favorite song), alternative takes with a cultural spin, novelty numbers, and unexpected discoveries. This is a musical road trip guided by an obsessive who just wants to share is affection for a genre of music that is maligned by many, tolerated by some, and embraced by a few obsessive fans. John Waters, Dr. Demento, and Joseph Simmons of Run DMC join the celebration. (Free on Kanopy and Hoopla)

Doctor Who Christmas Special 2014: Last Christmas (2014, TV-PG), the eighth Christmas special in what has become a tradition for the second generation series, teams The Doctor with another traveler who defies the physics of time, space, and reality as we know: Santa Claus, played with a cheeky competitiveness by Nick Frost. The banter and bubbly chemistry between Capaldi and Frost gives the battle of one-upmanship a hint of rivalry. Do they have a history? Is Santa Claus some distant relation to the Time Lords? Or merely a figment of their collective imaginations? It’s still the jolliest of the Doctor Who Christmas specials. (HBO Max)

A Darker Shade of Christmas

Joe Dante delves into the cute and the cuddly and finds the evil green monsters hiding inside in Gremlins (1984). It’s the dark side of E.T., a barbed fantasy about an army of nasty little lizard-like creatures that sprout like boils from the back of Gizmo, a sweet-natured teddy bear of a pet, and turn Dante’s picture-postcard version of Bedford Falls into a madhouse of mean-spirited practical jokes with fatal edges. The Gremlins are hyperactive, destructive bad kids and, for all their bullying and bad behavior, Dante gives them a kind of amoral innocence that turns to wonder when they watch Snow White and the Seven Dwarves. The rest of the time he simply kicks back and enjoys the creative mayhem. (HBO Max)

Before his career reinvention in Iron Man, Robert Downey Jr. took the lead in Kiss Kiss Bang Bang (2005, R), a deliciously inventive riff on crime movie conventions and clichés from Lethal Weapon screenwriter Shane Black, making his directorial debut. He plays a small-time New York thief who runs from a petty heist right into a Hollywood casting session that sends him to LA and a real life murder mystery with a no-nonsense private detective (Val Kilmer). Black shares Tarantino’s love for shuffling genre conventions and he fills this vivid little modern noir tale with nods, winks, tributes, and tongue-in-cheek commentary on itself, while still giving it all a gravity. And, of course, it all plays out over Christmas. (Free on Kanopy)

Years before John Carpenter’s Halloween, Bob Clark combined holidays and horror in Black Christmas (1974, R). Olivia Hussey and Margot Kidder are two of the sorority sisters who spend the holidays on campus, unaware of a mad killer hiding on the premises just waiting to prey on any girl who gives in to premarital sex. Clark went to make the genuine holiday classic A Christmas Story but he proves to be a natural in the horror genre and even pioneers some of the conventions of the genre, like the prowling camera of the killer’s POV and the “final girl.” It’s pretty much the original American slasher film, and better than most of the films that followed in its holiday horror footsteps. Including the inevitable remake. (Peacock and Criterion Channel, free on Kanopy and Hoopla)

Happy!: Season 1 (2018, TV-MA), a mix of crime thriller, dark comedy, and holiday fantasy, stars Christopher Meloni as a suicidal ex-cop searching for his kidnapped daughter with a tiny, flying, blue unicorn (voiced by Patton Oswalt). This is a show where a mad Santa kidnaps children and wraps them up as life-size dolls and their best hope is an alcoholic underworld hitman for hire. The blood spatters across the screen in the first 60 seconds, letting you know that this is clearly this not a holiday cocktail for everyone, especially kids (despite the candy-colored cartoon unicorn flitting through the mayhem). Originally made for SyFy, the eight-episode dark Christmas take is now streaming on Netflix, along with a second season that takes on Easter. (Netflix)

If there is still too much holiday cheer in your Christmas viewing, there is Black Mirror: White Christmas (2014, TV-MA), a Christmas story from the dark British series about technology bringing out the worst human impulses. But if you are looking for a shot of cynicism to counter the seasonal spirit, this clever anthology of three stories with a science fiction twist should fit the bill. Jon Hamm, who lobbied series creator and writer Charlie Booker to be involved in the show, is perfectly cast. He’s a born salesman, a Don Draper without a soul, swapping stories over a lonely white-out Christmas with another lost soul (Rafe Spall), but they are more than just storytellers. These are their stories and they don’t come out too well. The feature-length episode is the fourth episode of season 2. (Netflix)