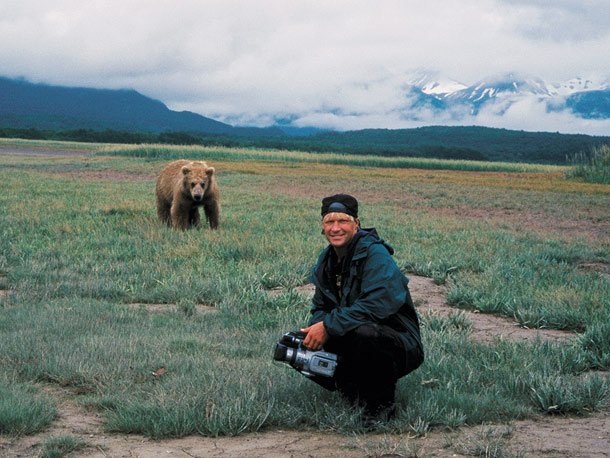 It’s easy to see why German filmmaker Werner Herzog was so fascinated by Timothy Treadwell, the former beach bum turned self-made wildlife activist and grizzly bear guardian. Treadwell spent thirteen summers living amidst the grizzly bears of the Katmai National Park and Preserve in Alaska until he, along with his girlfriend and traveling partner, Amie Huguenard, was mauled, killed, and devoured by his beloved cause.

As his documentary Grizzly Man (2005) suggests, Treadwell saw himself as a new-age Grizzly Adams with a video camera and a quest to save the habitat from humanity. He could be a real life folk version of the dreamers from Herzog’s dramas, less manic and not as prone to epic gestures but no less obsessed. Treadwell relentlessly videotaped his sojourns and the magnificent footage that he left behind captures a serenity and savagery of the wilds at times reminiscent of Herzog’s best films.

But the footage also serves his self-made mythological identity—”the lone guardian of the grizzly”—by constantly and pointedly placing himself in every shot, like the host of a non-existent nature show/nature reality series. His footage is accompanied by grandiose stream-of-consciousness running commentary, a mix of naturist idealism, poetic romanticism and a kiddie-show host blissing out on the wonders of mother nature. He speaks of the isolation of his solo forays into the wilds, even though he was accompanied and assisted by female partners/girlfriends on practically every trip, and is careful to never mention their presence, let alone allow them to share credit in his adventure.

Herzog frames Treadwell’s footage (much of quite beautiful and majestic, with landscapes limned in fog and dense forests stretching forever) with his own trademark commentary and new interviews with those who knew Treadwell. They have often contradictory assessments but there’s one thing that everyone agrees upon (and his own footage seems to corroborate): more than simply protecting the grizzlies, Treadwell wanted to join their world, but on his own terms.

“I must disagree with Treadwell here,” Herzog interjects after one of Treadwell’s overexcited paeans to the natural wonder and spiritual purity of the grizzlies. “What haunts me is that, in all the faces of all the bears that Treadwell ever filmed, I discover no kinship, no understanding, no mercy. I see only the overwhelming indifference of nature.”

Herzog the dreamer genuinely respects Treadwell even as he disagrees with his idealized take on the predatory wild, but it’s Treadwell’s contradictions and controversies that fascinate Herzog the filmmaker, inspiring him to create this enthralling documentary portrait.

Pingback: 'Cave of Forgotten Dreams' and other Werner Herzog true visions on Netflix and Hulu - Stream On Demand
Comments are closed.