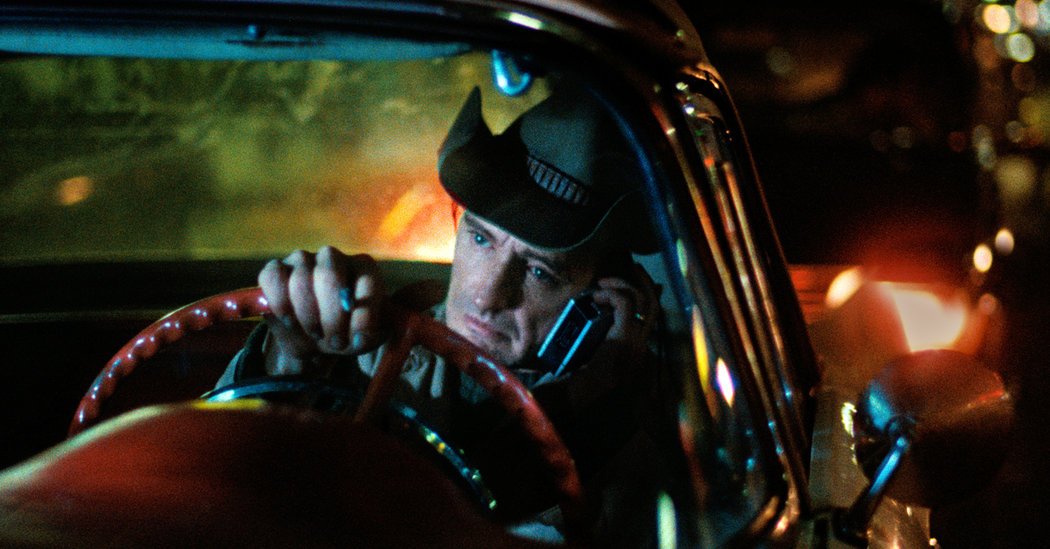 The American Friend (Germany, 1977) – “What’s wrong with a cowboy in Hamburg?” Dennis Hopper’s Tom Ripley is nothing like the character that Patricia Highsmith created and explored in five novels, and while Wim Wender’s adaptation of Ripley’s Game, the sequel to The Talented Mr. Ripley, remains more or less faithful to the plot (with additional elements appropriated from Ripley Underground), the personality and sensibility belong to Wenders.

The cool, cunning sociopath of Highsmith’s novel becomes a restless international hustler, selling art forgeries and brokering deals (some of which may actually be legal) while travelling back and forth through Germany, France, and the United States. His target, renamed Jonathan Zimmerman here (a Dylan reference? Wenders loves his American music, you know) and played with an easy (if at times arrogant) integrity by Bruno Ganz, is a German art restorer who now runs a frame shop due to the effects of a fatal blood disease.

In true Highsmith fashion, the motivation is purely psychological and emotional—a small but purposeful social slight—and the reverberations are immense. Ripley concocts a medical con to convince Zimmerman he’s dying so a French associate (played by Gerard Blain) can tempt him to be his assassin, and then comes to his rescue as the French criminal extends the cruel little act of revenge to pull Zimmerman into additional murders.

Given these origins, the relationship that develops between Zimmerman and Ripley, who returns as a strange dark angel savior, is genuine and fraternal, even as it arises from deceit and a desire to punish, and rife with contractions. While Zimmerman is unexpectedly intoxicated by the danger and violence of his assignments, his victims are not merely the murdered criminals, but his family. This is as introspective and psychologically tangled as thrillers come, and all the more compelling for it.

Wenders regular Lisa Kreuzer is excellent as Zimmerman’s wife, whose suspicions of Ripley prove completely founded, Nicholas Ray is superb as the aging New York artist turned forger who, in opening scene, contemplates his failing eyesight (he was dying of cancer at the time of shooting and the acknowledgment of his mortality haunts his scenes), and Sam Fuller barks orders as an American gangster.

Presented on Criterion Channel with bonus interviews and other supplements originally presented on the Criterion special edition disc. Add to My List

It’s also part of the “Directed by Wim Wenders” collection.

Also available on DVD and Blu-ray in a deluxe Criterion edition and on SVOD through Amazon Video and other services. Availability may vary by service.
The American Friend (The Criterion Collection) [Blu-ray]

Criterion’s Blu-ray and DVD edition is mastered from a new 4k restoration produced by Wenders’ own production company and supervised by Wenders. Robbie Muller’s cinematography is preserved in all its clarity, from the cool, uncluttered quality of the airports and train stations and Ripley’s own fortress of a home to the cluttered warmth of Zimmerman’s home and frame shop.

It features commentary recorded by Wim Wenders and Dennis Hopper for the original 2003 DVD release, “exactly 25 years after we shot it.” Wenders is quite and calmly paced (“Somehow I became obsessed with having directors play all the crooks and bad guys”) and Hopper calmer than you might expect. Their talk isn’t quite a conversation (Wenders sounds more like a combination lecturer and storyteller and Hopper ends up his audience much of the time), but they find their rhythm about a half hour into it. The deleted scenes in the 36 minute featurette are interspersed with behind-the-scenes shots, slates, outtakes, and colorful production footage. Without the benefit of introductions or titles, the commentary is essential to place the shots and understand the context, and true to form the soft-spoken Wenders acts more like a host than a commentator as he sets the scenes. There isn’t much explanation, but there are stories, insights, and reflections in all the commentaries.

Exclusive to the release are the interview featurettes “Too Much on my Mind: Wim Wenders on The American Friend” (in English), with the director reflecting back on his career and the origins and production of the film (37 minutes), and “From Jonathan: Bruno Ganz on The American Friend” (in German), which runs about 27 minutes. The accompanying fold-out insert features a new essay by novelist Francine Prose.