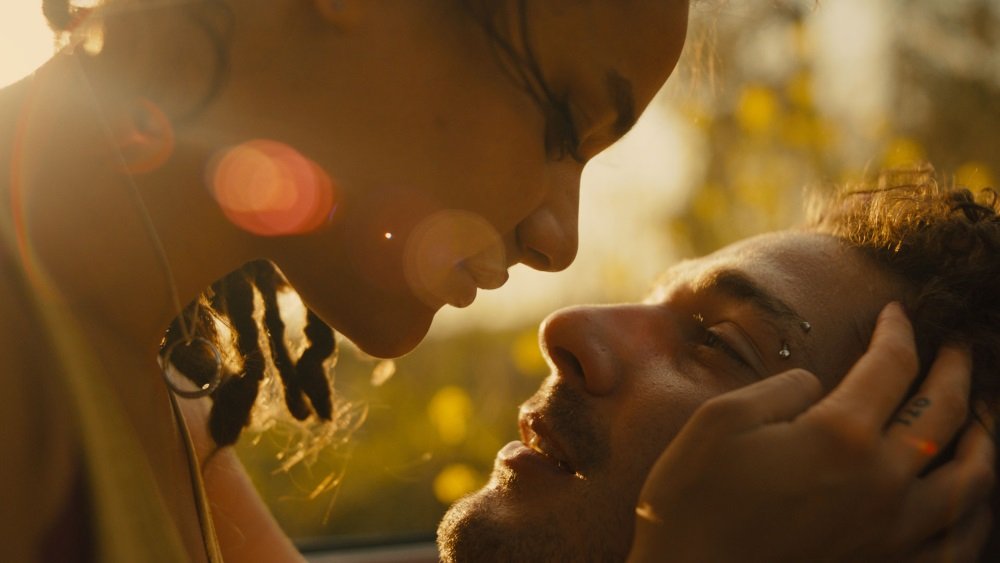 American Honey (2016), the first American film from British filmmaker Andrea Arnold, is a road movie powered by the restlessness and passion of its young heroine Star (newcomer Sasha Lane), the eldest daughter of a deadbeat mom and a skeezy father (step-father?) who won’t stop pawing her teenage body. Recruited by Jake (Shia LaBeouf), a charismatic bad-boy with a streetwise confidence, she dumps her younger siblings with mom and hits the road with a gypsy crew selling magazine subscriptions door-to-door under the mercenary eye of Krystal (Riley Keough), the pitiless captain of this otherwise freewheeling crew. Krystal is Fagin to Jake’s Artful Dodger, her top earner and group cheerleader, in a migrant gang that follows the fields of potential marks. They travel by van across the Midwest, crash in dumpy motels, and shuttle from the dreary industrial outskirts into the moneyed neighborhoods where they deliver whatever spiel they think will stir the charitable impulses of their marks.

It could be the American cousin to her celebrated 2009 feature Fish Tank, another film about a teenage girl with dreams of escaping the poverty and neglect of her situation. Star doesn’t so much escape as trade her smothering life for a caravan existence with its own restrictions and dangers, and she lets loose with equal parts reckless abandon, irresistible self-confidence, pouty insolence, and impulsive passion. Sasha Lane was scouted and recruited by Arnold—she arrived with no acting experience, like most of the young cast—and Arnold’s instincts are rewarded with an incandescent performance. Star is a girl that grew up fast and Lane invests her with a mix of survivalist experience and emotional immaturity suddenly let loose without responsibility or oversight. It’s hard not to panic as she blindly leaps into a car with three drunk cowboys, but Arnold isn’t judging and Star’s confidence and resilience manages to pull her through.

Arnold shoots the film in the squarish frame of the pre-widescreen era, as if Star’s freedom is still constrained by the limitations of opportunity, with her handheld camera runs, bounces, and whips around in close quarters in the indie vérité style so popular in independent cinema. It rambles on for over two-and-a-half hours, emphasis on the ramble, with a raw energy, intimate immediacy, and rough-hewn beauty. Arnold is intent on capturing the texture of Star’s experience and she succeeds. This is reckless, anxious, hormonally-charged, anything-goes youth unbound and it is alive.

It won the Jury Prize and the Prize of the Ecumenical Jury at the Cannes Film Festival and was nominated for six Film Independent Spirit Awards.

, iTunes, GooglePlay, and other services. Availability may vary by service.
American Honey [DVD]

The Blu-ray and DVD include an interview featurette with stars Sasha Lane and Riley Keough. The Blu-ray also features a bonus Ultraviolet Digital HD copy of the film.