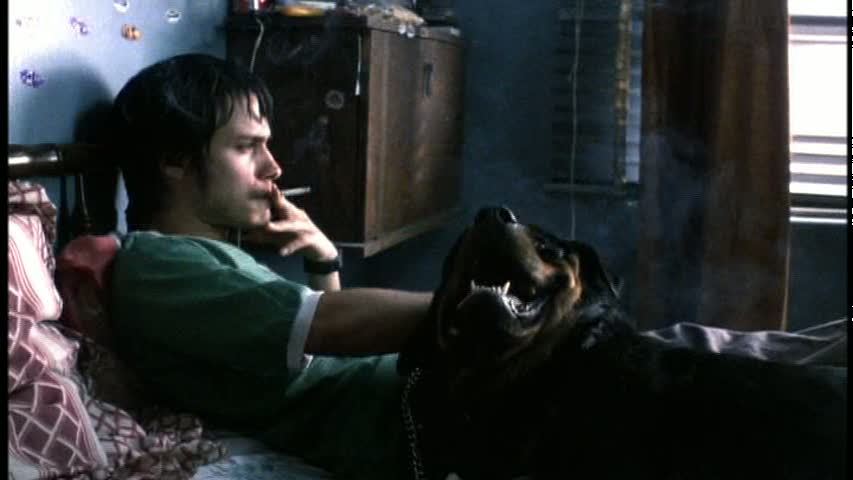 A wounded figure lies helplessly bleeding in the backseat of a car recklessly careening through city streets while a pistol blasting thug in a souped-up pickup drives the fleeing car into a shattering crash. The jerky in-your-face camerawork, raw, earthy colors, and jagged editing looks just like a low budget crime picture that exploded from the influence of Quentin Tarentino’s Reservoir Dogs. Except the gunshot victim is a dog.

Alejandro Gonzalez Inarritu’s Amores Perros (Mexico, 2000), a trilogy of stories connected by a crippling car wreck, is quite literally a portrait of a violent dog-eat-dog world of Mexico City (the title loosely translates as “Life’s a Bitch”). The wounded pooch, Cofi, is a fearless champion in the savage underworld of illegal dog fighting (the opening promise of animal safety will do little to calm viewers disturbed by animal violence; it all looks quite real and it’s tough viewing). It is just one of the dogs that defines and drives the human stories of lovers and families wounded by the violence and volatility around them.

The jittery, jagged style of the opening scene aside, Inarritu directs the original screenplay by Guillermo Arriaga Jordán with a slow, methodical pace and a sureness of tone, the better to get under the skin of his unsettled characters. And unsettled they are: an aimless but gentle boy (Gael García Bernal) in love with the schoolgirl bride of his angry, abusive street criminal brother; a glamorous model (Goya Toledo) crippled and scarred in a car wreck; a street person (Emilio Echevarría) with a violent past and a murderous sideline who prowls garbage dumps with a pack of stray dogs.

At times Inarritu allows his pretensions to overtake the raw power of the passionate characters and at 153 minutes the focus tends to dissipate, especially in the final story. But it’s an invigorating film filled with vivid performances, haunting scenes, and messy, intense emotions, a violent portrait of modern day Mexico City grounded in frustration, helplessness, and messy, intense emotions.

It was an Oscar nominee for Foreign Language Film, winner of three awards at Cannes, and the launching pad for some major film talents: Bernal went on to star in Y Tu Mamá También, No, and Mozart in the Jungle, cinematographer Rodrigo Prieto earned Oscar nominations for Brokeback Mountain and Silence, screenwriter Guillermo Arriaga Jordán went on to write The Three Burials of Melquiades Estrada and Babel, and Inarritu won back-to-back Oscars for directing Birdman and The Revenant.

Add to My List on Criterion Channel, presented with supplements from the Criterion Collection special edition disc release, and free on Kanopy, which is available through most public and college library systems.

, iTunes, GooglePlay and/or other services. Availability may vary by service.
Amores Perros [Blu-ray]

On Blu-ray and DVD with a commentary track, behind the scenes footage, music videos, and trailers.