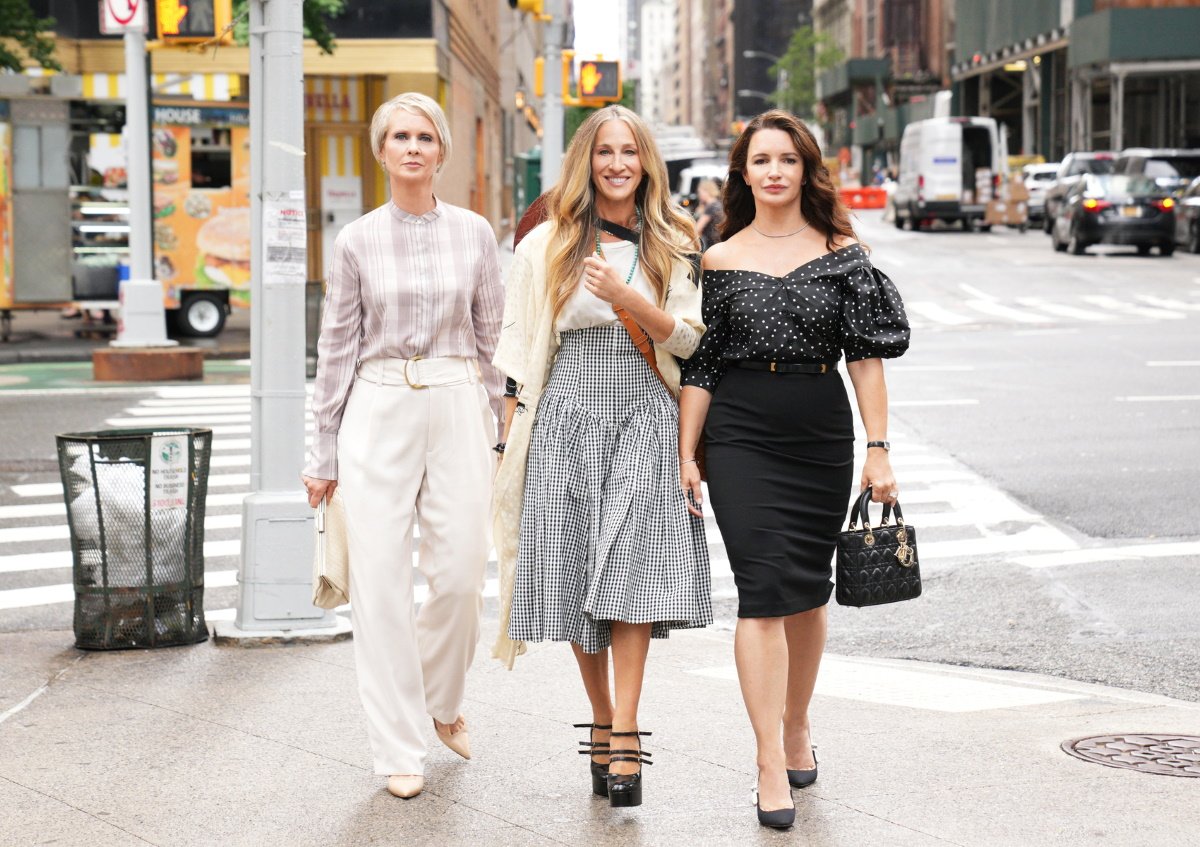 Carrie (Sarah Jessica Parker), Miranda (Cynthia Nixon) and Charlotte (Kristin Davis) are back in “And Just Like That…“ (TV-MA), a limited series sequel to “Sex in the City” that follows the three old friend (Kim Cattrall is not part of the reunion) as they navigate life in their fifties. Sarita Choudhury, Nicole Ari Parker, Karen Pittman and Sara Ramírez join the cast and bring a little inclusiveness missing from the original series, and plenty of old friends return, including the Chris Noth, Even Handler, and Willie Garson in his final screen performance. New episodes on Thursdays. (HBO Max)

The British limited series “Landscapers“ (TV-MA) is an offbeat crime drama based on the true story of a seemingly ordinary British couple (played by Olivia Colman and David Thewlis) whose real lives are tangled in fantasy, denial, and murder. Director Will Sharpe brings the cinematic imagination he displayed in “The Electrical Life of Louis Wain.” New episodes on Mondays (HBO Max)

The sixth and final season of “The Expanse“ (TV-MA), the best interplanetary science fiction series since “Battlestar Galactica,” sends the sprawling space drama into the heat of interstellar warfare as Earth recovers from devastating asteroid attacks. New episodes on Fridays. (Amazon Prime Video)

The documentary “The First Wave“ (2021, R) follows a group of doctors, nurses, and patients in one of New York’s hardest hit hospital systems in the first four months of the COVID pandemic. It’s from Oscar-nominated filmmaker Matthew Heineman. (Hulu)

Will Smith travels the world to explore Earth’s greatest wonders, from the ocean depths to active volcanoes to lions on the African plains, in the natural history limited series “Welcome to Earth“ (TV-PG) produced by National Geographic. (Disney+)

A group of misunderstood animals make a break from the zoo to get “Back to the Outback“ (2021, PG) in the animated adventure set in Australia. Features the voices of Isla Fisher, Eric Bana, Guy Pearce, and Jacki Weaver. (Netflix)

“Zoey’s Extraordinary Christmas“ (2021, TV-14) is both a holiday musical and a sequel to the TV series starring Jane Levy… and maybe a test run for a possible revival. Streams free with ads, along with every episode of the original series. (Roku Channel)

“Dear Evan Hansen“ (2021, PG-13) brings the hit Broadway musical to the screen with Ben Platt reprising his stage role as an isolated high school kid suddenly accepted because of a lie.

A child who can move through parallel worlds is pursued by a dark figure in “Portal Runner“ (2021, not rated), a family science fiction adventure that was shot in Seattle.

Clint Eastwood directs and stars in “Cry Macho“ (2021, PG-13) as a former rodeo rider bringing a trouble kid and his rooster (named Macho) from Mexico to his estranged father in Texas.

A college girl comes home to her Indian-American family in New Jersey for a revealing reunion in the comedy “India Sweets and Spices“ (2021, PG-13).

Sandra Bullock produces and stars in “The Unforgivable“ (2021, R) as a woman released from a twenty-year prison sentence for murder and looking for the little sister she left behind. Vincent D’Onofrio, Viola Davis, and Jon Bernthal costar in this remake of the 2009 British miniseries mystery.

“Saturday Morning All Star Hits! Season 1“ (TV-14), a mix of live-action and animation, celebrates and sends up the Saturday-morning shows of the ’80s and ’90s.

True stories: “Voir: Season 1“ (TV-MA) presents a series of short cinematic essays from contemporary film critics that explore and examine the power of cinema and “Tiger King: The Doc Antle Story“ (2021, TV-MA) is a spinoff of the hit documentary series.

International passport: in the thriller “Two“ (Spain, TV-MA, with subtitles), a pair of strangers wakeup to find themselves literally sewn together at the abdomen. Also new:

The reality series “The Ferragnez: Season 1“ (TV-Y7) takes viewers into the lives of digital entrepreneur and fashion icon Chiara Ferragni and artist Fedez.

“Creamerie: Season 1“ (not rated) is a post-apocalyptic dark comedy from New Zealand about a future where a viral plague killed all men… or did it?

A retired hairdresser (Udo Kier) escapes his nursing home for one last adventure to fulfill the dying wish of a former client in “Swan Song“ (2021, R). Jennifer Coolidge, Linda Evans, and Michael Urie costar in the offbeat odyssey.

Brad Pitt travels the globe for a cure for the zombie plague in the action horror “World War Z“ (2013, PG-13).

Two new “Live in Front of a Studio Audience“ TV events are now streaming: reenactments of classic sitcom episodes of “Diff’rent Strokes” and “The Facts of Life” with such stars as John Lithgow, Kevin Hart, Damon Wayans, Jennifer Aniston, Gabrielle Union, and Ann Down as Mrs. Garrett in both episodes. More streaming TV:

The comedy “Limbo“ (2021, R) explores the immigrant experience through the story of a young Syrian musician (Amir El-Masry) awaiting an asylum request on a remote Scottish island.

Jodie Turner-Smith stars as “Anne Boleyn“ (not rated) in the limited series psychological thriller exploring the final months in the life of the doomed with of King Henry VIII. New episodes on Thursdays.

The three-part natural history documentary “Wild Patagonia“ (not rated) explores the landscape and wildlife of the South American region.

The romantic dramedy “Under the Vines: Season 1“ (not rated) stars Rebecca Gibney and Charles Edwards as bickering city folk who inherit a failing New Zealand winery. New episodes on Mondays.

“Hitchcock for the Holidays” collects 21 films from the master, from his breakthrough masterpiece “The Lodger: A Story of the London Fog“ (1927, silent with music score) to his final film, the lighthearted mystery “Family Plot“ (1976, PG) with Karen Black and Bruce Dern. If you are looking for recommendations, try his snappy British romantic thriller “The Lady Vanishes“ (1938), small town mystery “Shadow of a Doubt“ (1943) with Joseph Cotten, and two of his James Stewart classics, “Rear Window“ (1954) with Grace Kelly and “Vertigo“ (1958), which was voted the greatest film ever made in the 2012 BFI critics poll.

The documentary “Lydia Lunch: The War Is Never Over“ (2019, not rated) is a portrait of New York’s iconic No Wave music and spoken-word artist from underground filmmaking legend Beth B.