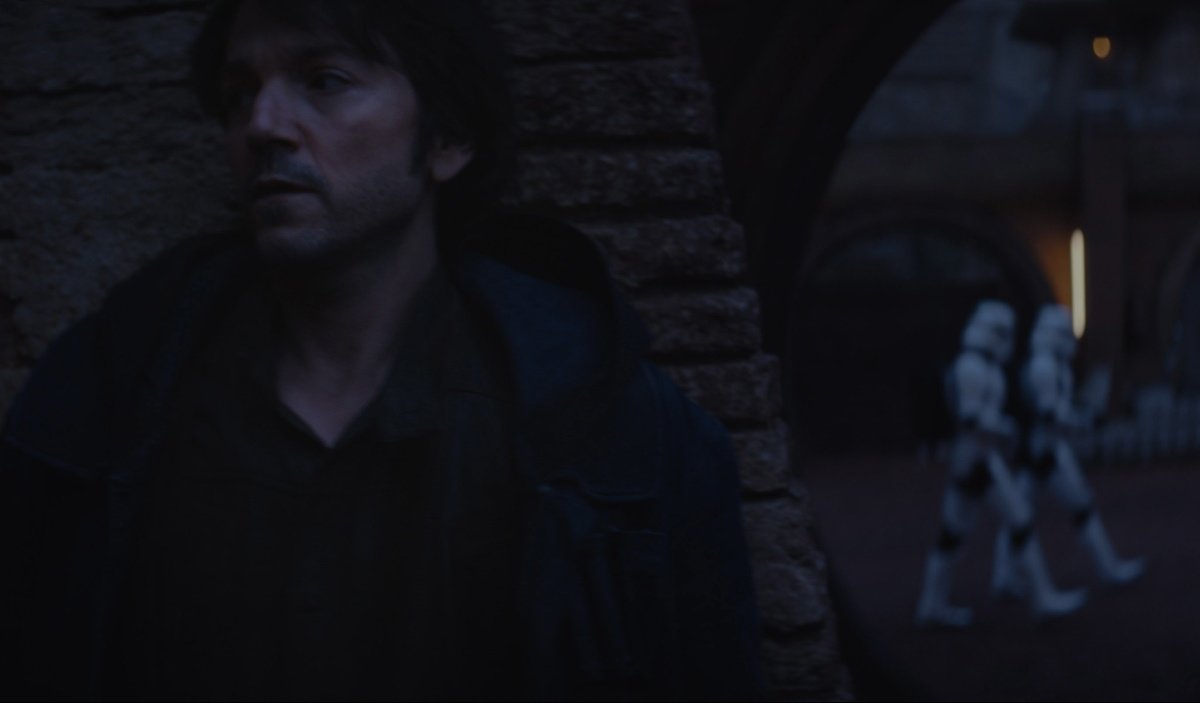 “Andor” (TV-14), the latest small screen spinoff of the “Star Wars” movies, chronicles the transformation of Cassian Andor (Diego Luna) into the rebel hero of “Rogue One.”  In many ways it is a prequel to “A New Hope,” a darker, grittier kind of series that tells the origins of the rebellion against the Empire. Oscar-nominated screenwriter Tony Gilroy (“Michael Clayton”) created and developed the show and Genevieve O’Reilly, Stellan Skarsgård, and Adria Arjona costar. It also features one of the best writing teams for a series, including Dan Gilroy (“Nightcrawler”), Stephen Schiff (“The Americans”), and Beau Willimon (“House of Cards”). Three episodes available, new episodes on Wednesdays. (Disney+)

Allison Janney takes on the Liam Neeson mantle in “Lou” (2022, R), playing a mystery woman with violent past roused from retirement and self-imposed exile by the mother (Jurnee Smollet) of a kidnapped child. Janney gets to go action hero as another terse veteran with a certain set of skills, battling her own failing body while taking on a sociopath kidnapper (Logan Marshall-Green) in the midst of a raging storm. This action thriller from executive producer JJ Abrams costars Matt Craven and is directed by Anna Foerster. (Netflix)

“On the Come Up” (2022, PG-13) follows the 16-year-old Bri (Jamila C. Gray), daughter of a local hip-hop legend killed by gang violence, and her efforts to find her voice and establish herself in the battle rap scene. Based on the novel by Angie Thomas, this urban coming of age drama is the directorial debut of actor Sanaa Latham and costars Da’Vine Joy Randolph and Mike Epps. It debuted at the 2022 Toronto International Film Festival. (Paramount+)

Tyler Perry takes on a different kind of story in “A Jazzman’s Blues” (2022, R), a drama of forbidden love, art, music, and racial violence that plays out in the Jim Crow Deep South of the 1930s and 1940s and post-war Chicago. Joshua Boone, Solea Pfeiffer, and Amirah Vann star in the historical melodrama, set to a score of juke joint blues. (Netflix)

The documentary “Sidney” (PG-13) profiles Sidney Poitier, who was born to poverty and reinvented himself as one of the great actors of his generation and the first African-American to win the Oscar for best actor. Reginald Hudlin directs this portrait of the Hollywood legend, filmmaker, icon, and Civil Rights activist. (Apple TV+)

International pick: The death of a young Algerian-French man in the Paris suburbs at the hands of the police sparks an urban war in “Athena” (France, 2022, with subtitles), a drama of police racism and public outrage that boils over into violence. Directed by Romain Gavras (son of Oscar-winning filmmaker Costa-Gavras), it streams weeks after its debut at the Venice Film Festival. (Netflix)

The fall TV season will stream alongside its broadcast version. Here’s where you can find this weeks’ debuts.

Hulu streams the shows from ABC and Fox a day after their respective network debuts, including the second season of the Emmy-winning sitcom “Abbott Elementary” (TV-PG). Also available are new seasons of first responder drama “9-1-1” (TV-MA), medical drama “The Resident” (TV-14), mystery series “Big Sky” (TV-14), and the sitcoms “The Goldbergs” (TV-PG) and “The Conners” (TV-PG).

Mark Cousins follows up his award-winning documentary series with “The Story of Film: A New Generation” (2021, not rated), which surveys the last decade.

True stories: the limited series “The Real Bling Ring: Hollywood Heist“ (TV-MA) features interviews with perpetrators of the Bling Ring burglaries in the Hollywood Hills a decade ago.

International passport: a detective who has lost her sense of smell teams up with a perfume maker in the thriller “The Perfumier“ (Germany, 2022, TV-MA, with subtitles).

International TV: the limited series “Thai Cave Rescue“ (Thailand/US, TV-14, with subtitles) is the second fictional retelling of the rescue of a Thai youth soccer team from a flooded cave.

Kid stuff: “Minions & More“ (TV-PG) presents a collection of animated shorts from the “Despicable Me” franchise and “Pokémon: The Arceus Chronicles“ (Japan, 2022, TV-Y7) is the latest animated feature from the game franchise.

“Best in Dough: Season 1“ (not rated) is a foodie competition series built around pizza.

The documentary “Escape From Kabul“ (2022, TV-14) chronicles of rapid withdrawal of American troops and refugees from Afghanistan over 18 days in August 2021.

The animated family comedy “Spies in Disguise“ (2019, PG) features the voices of Will Smith and Tom Holland.

The natural history series “Super/Natural: Season 1“ (not rated) explores the super-senses of the world’s most extraordinary animals. Narrated by Benedict Cumberbatch.

“Firestarter“ (2022, R), the second film based on the novel by horror legend Stephen King, stars Zac Ephron stars as a father protecting his adolescent daughter (Ryan Kera Armstrong), who can control fire with her mind and turn it into a weapon, from a shadowy government organization.

“Prisma: Season 1“ (Italy, not rated, with subtitles) explores the identities of a group of friends in a small town in Italy, with a focus on twin brothers (played by Mattia Carrano) who challenge gender norms in profoundly different ways.

The limited series “Hush Hush“ (India, TV-MA, with subtitles) is a thriller about a group of women whose privileged lives are threatened by lies and deceit.

The limited series documentary “Shadowland“ (not rated) explores fake news and conspiracy theories and the allure they hold for people who embrace them.

“Paris Police 1900: Season 1“ (France, with subtitles) is a sweeping crime drama set against the growing violence of far-right anti-Semitic groups during the Dreyfus Affair in turn-of-the-20th-century Paris. Created, written, and directed by Fabien Nury, author of the graphic novel “The Death of Stalin.”

“The Most Beautiful Boy in the World“ (2021, Sweden, not rated, with subtitles) follows Björn Andrésen, who was elevated to sudden fame when filmmaker Luchino Visconti cast him in “Death in Venice“ (Italy, 1971) at the age of 15. He recounts his turbulent life in the documentary, which makes his streaming debut along with Visconti’s classic film, presented with documentaries and interviews.

“Cinematography by James Wong Howe” collects 24 films photographed by the great Chinese-American artist across four decades, from star-studded MGM classics “Manhattan Melodrama“ (1934) and “The Prisoner of Zenda“ (1937) to “Funny Lady“ (1975), including the films that earned his two Oscars, “The Rose Tattoo“ (1955) and “Hud“ (1963).

“Me to Play“ (2022, not rated) documents two actors with Parkinson’s disease who give their farewell performances in an Off-Broadway production of Samuel Beckett’s “Endgame.”