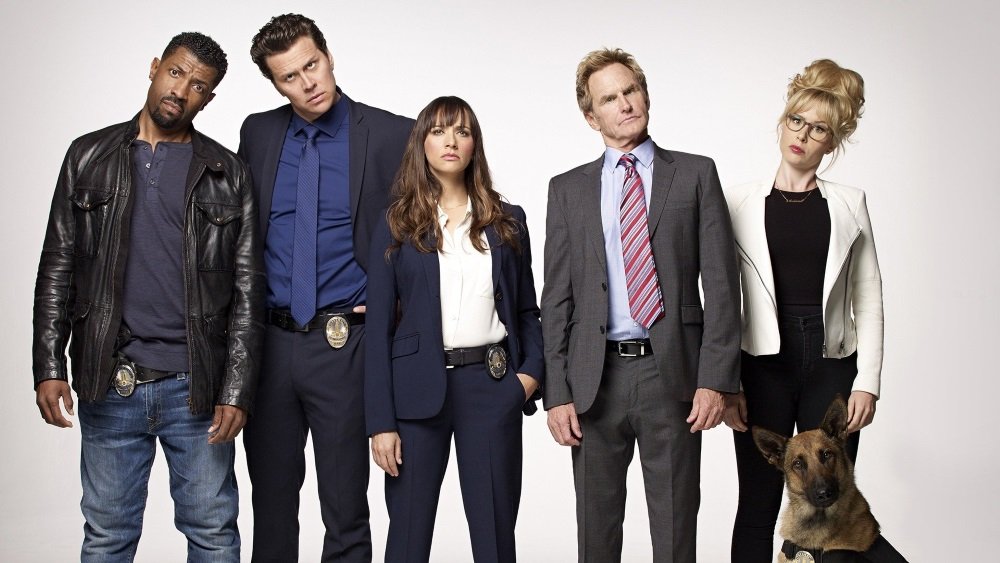 Angie Tribeca: Season One – I loved Police Squad, the short-lived TV comedy from the creators of Airplane! that spoofed TV cop shows with an anything goes approach. Only six episodes were made before the networks gave up on it. This was 1982, after all, back in the days when only three major networks existed, and though the concept had greater success a few years later in Sledge Hammer!, which spoofed 70s tough-guy crime shows and the Dirty Harry movies, it didn’t have the same concentrated absurdity. Had Police Squad launched 30 years later, it might have found a home in the cablesphere if not on network TV, where 30 Rock stirred Airplane!-like gags through the workplace comedy and media satire.

That’s where Angie Tribeca steps in. Created by Steve and Nancy Carell, it is the 21st century answer to Police Squad reworked as a parody of modern police procedurals. Rashida Jones is Angie Tribeca, a hard-case lone wolf cop who is assigned a new partner named Jay Geils (Hayes MacArthur), and they spend the season dancing around the mutual attraction while taking such high-profile cases as blackmail, art theft, and illegal pet ferrets smuggled into California. Just to break things up, they go undercover on an airliner where Angie’s competitive sister is a stewardess and in a prison with a gang of British thieves whose accents are almost impenetrable. The character names are a hodge-podge collection of pop culture references—fellow officer DJ Tanner (Deon Cole) is named after a Full House character, the coroner is Dr. Scholls (Andree Vermeulen), and their flinty boss is Chet Atkins (Jere Burns), who barks out every line with a disgruntled yell, no matter what the situation—and the cases are clichés turned on their heads.

This kind of comedy demands creative lunacy, deadpan delivery, and a rapid fire barrage of gags to succeed and Angie Tribeca has it down, from crazed sight gags to nonsensical non sequiturs. It also features an impressive line-up of guest stars through the season, with appearances by Lisa Kudrow, Gary Cole, James Franco, Jeff Dunham, John Michael Higgins, Amy Smart, David Koechner, Kerri Kenney-Silver, Keegan-Michael Key, and Bill Murray. This is my kind of whimsy and it’s done well. The second season is now running on TBS.

10 episodes. Watch it on Hulu