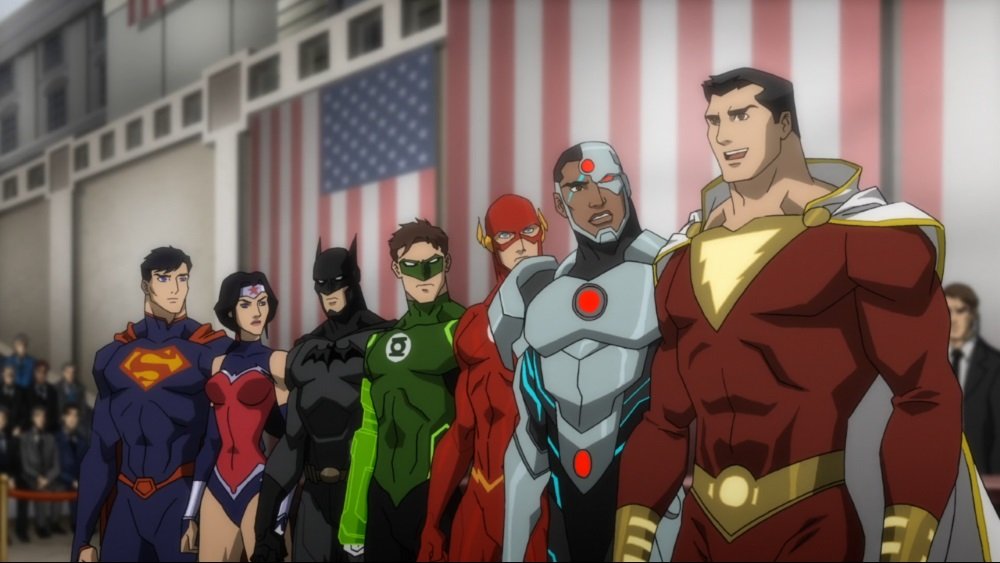 Marvel Comics dominates the superhero world on the big screen but the DC Comics Universe has produced an interesting run of original animated movies that they released direct to disc and digital purchase. This is not the polished animation of theatrical features but it’s a step up from TV animation and these features are adapted from graphic novels and acclaimed comic book runs. Three of those films are now streaming on Netflix.

Justice League: The Flashpoint Paradox (2013) is an alternate reality horror story adapted from the graphic novel “Flashpoint” by Geoff Johns and Andy Kubert, where The Flash (voiced by Justin Chambers) changes the past and transforms the present into world at war. In this alternate future, Flash has no powers, Bruce Wayne is dead (turning Wayne’s father into a brutal masked vigilante), and superheroes Wonder Woman and Aquaman are vicious warlords ready to destroy the earth in their blood feud. It’s the butterfly effect as comic book apocalypse and it’s a dark, brutal animated film. Warped-mirror versions of beloved DC heroes are turned into bloodthirsty warriors murdering one another (and even slaughtering children, albeit off-screen) until the frame is littered with corpses, and The Flash needs to recover his speed to set things right. This one earns its PG-13 rating (it features bloody violence and even some mild foul language) and is aimed at a more mature graphic novel audience. The voice cast includes Michael B. Jordan as Cyborg, Cary Elwes as Aquaman, and Vanessa Marshall as Wonder Woman.

Justice League: War (2014), based on “Justice League: Origins” by Geoff Johns and Jim Lee (which helped kick off the “New 52” reboot of the DC comic book heroes), reimagines the first meeting of the DC superhero stars: Superman, Batman, Wonder Woman, Green Lantern, The Flash, and less obviously Shazam (aka Captain Marvel) and Cyborg. They fight the nihilistic Darkseid here, the most powerful of DC’s villains, but otherwise it follows the familiar “making of the super band” formula: a bunch of solo heroes have to get over themselves and their suspicions of those other guys and work like a team to save the world (and, in the process, their own public image). Quips are crammed in between the spats and battles (voice cast includes Alan Tudyk, Jason O’Mara, Michelle Monaghan, and Justin Kirk), but there’s not much resonance this time around, not compared to The Flashpoint Paradox. It works better as a prologue than an opening act. It’s the first of the DC Animated Universe originals to come from the reboot but likely not the last. In fact, this looks like the launch of a new, integrated DC Universe, just like in the Marvel live action series.

Son of Batman (2014) is adapted from the Grant Morrison-penned four-issue mini-series of the same name. Damian is indeed the son of Batman, the offspring of his affair with Talia al Ghul of the League of Assassins, and he discovers his progeny after the organization is attacked by Deathstroke and Damian targeted for death. So Batman becomes not just a father figure to a young sidekick but in fact a father, trying to teach his arrogant and highly talented ninja assassin of a son a less fatal approach to combat and crimefighting. Jason O’Mara voices the Caped Crusader, Morena Baccarin is Talia, and Stuart Allan is Damian, with David McCallum doing a superb Alfred, who is not at all impressed by the arrogant young Damian. Author Joe R. Lansdale, who has written a couple of scripts for the old animated Batman, scripts the adaptation. This one earns its PG-13 rating with some major violence (the blood flowers spray freely in the first scene as bullets and swords cut down the League of Assassins) and an acknowledgement of Batman’s sex life, not to mention a scene with a couple of prostitutes (or “harlots,” in Damian’s words).