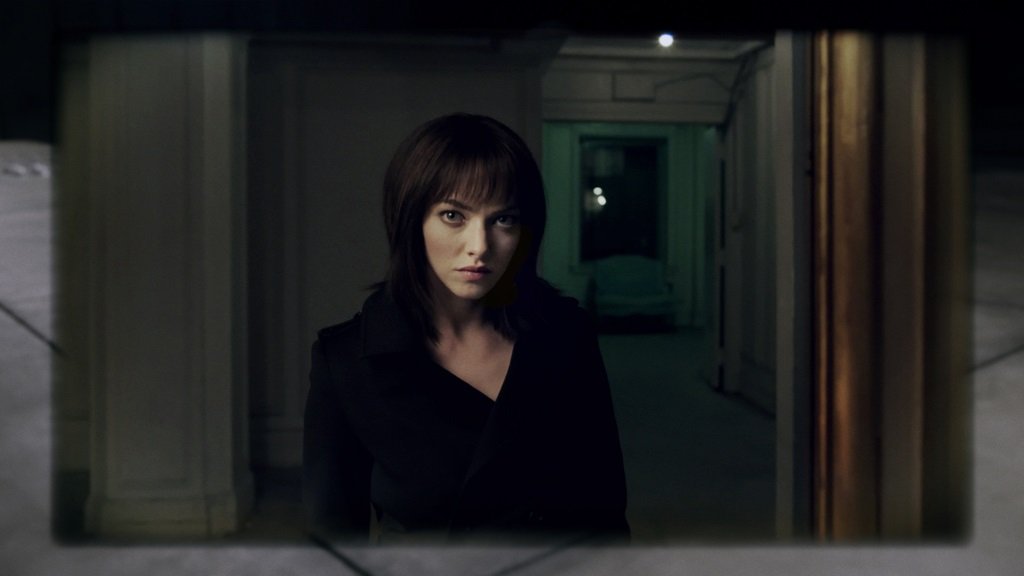 Clive Owen and Amanda Seyfried star in the sci-fi thriller Anon (2018, not rated), a murder mystery set in a future with no privacy or anonymity from The Truman Show writer and Gattaca director Andrew Niccol. There have been no festival screenings and no advance access to critics, so it opened in England Netflix before it did here (available at midnight their time).

“Andrew Niccol brings another of his Philip K Dick-style futurist high concepts to the movie screen, and it doesn’t entirely come off,” says Peter Bradshaw for The Guardian. “This is a self-consciously stark, bleak, hi-tech criminal noir, hardboiled in a postmodern style….”

Hong Kong action legend John Woo returns to the gun-fu genre with Manhunt (China, 2017, not rated, with subtitles), a bullet-riddled action thriller about a Chinese lawyer (Zhang Hanyu) in Osaka on the run from cops and killer and a Hong Kong maverick cop (Masaharu Fukuyama) in close pursuit. Woo delivers a series of high-energy signature set pieces directed with self-parodying humor, right down to his signature spray of doves in slow motion.

“(W)hen Manhunt gets to its actual action scenes, it delivers with aplomb the kinetically choreographed decadence that has been Woo’s forte since the 1980s,” cheers Ignatiy Vishnevesky at The AV Club. “But for a time, the movie seems to be outpaced by its own cartoon logic and convoluted “wrong man” setup…”

Steve Carell, Bryan Cranston, and Laurence Fishburne are three Vietnam vets on a road trip to bury the son of a friend killed in combat in Last Flag Flying (2017, R) from director Richard Linklater. Now streaming on Amazon Prime Video.

A Little Help with Carol Burnett: Season 1 is a new unscripted Netflix Original series that teams the comedy legend with a panel of children to offer advice to celebrities and everyday people. 12 half-hour episodes now available to stream.

The Oscar-winning animated comedy Shrek (2001, PG) features Mike Myers voicing a swamp ogre, Eddie Murphy as a talking mule, and Cameron Diaz as a fairy tale princess waiting for her happily ever after.

From England comes God’s Own Country (2017, not rated), a drama about a closeted Yorkshire farmer who begins an affair with a Romanian migrant worker.

The short documentary End Game (2018, not rated) follows visionary medical practitioners who are working on the cutting edge of life and death.

Foreign affairs: Forgive Us Our Debts (Italy, 2018, not rated, with subtitles), about a man deeply in debt forced to work as a debt collector, debuts on Netflix the same day it opens in Italy.

Also new in May are the family-friendly drama Hachi: A Dog’s Tale (2009, G) with Richard Gere and a collection of sequels:

More streaming TV: science fiction thriller The Rain: Season 1 is a Netflix Original from Denmark about life after a viral apocalypse. Also new:

True stories: 27: Gone Too Soon (2018, not rated) looks at the musical greats who died at age 27: Brian Jones, Jimi Hendrix, Janis Joplin, Jim Morrison, Kurt Cobain, and Amy Winehouse. Also new: A Life of Its Own: The Truth about Medical Marijuana (2017, not rated) puts a spotlight on new research.

John Hurt is The Elephant Man (1980, PG) opposite Anthony Hopkins in David Lynch’s haunting drama, which was nominated for eight Academy Awards.

John Wayne made his final film appearance in The Shootist (1976, PG), an elegiac sunset western with Lauren Bacall and James Stewart. Also new this month:

Kid stuff: The Golden Compass (2007, PG-13), based on the novel by Philip Pullman, is a handsome, grandly-realized big screen fantasy but failed to launch a planned franchise. Dakota Blue Richards stars with Nicole Kidman, Daniel Craig, and an army of ice bears. Also new: the animated comic adventure The Wild Thornberrys Movie (2002, PG).

Streaming TV: Pride and Prejudice (1995), the superb mini-series with Colin Firth and Jennifer Ehle, leads off a collection of BBC limited series and miniseries, including the original The Office: Complete Series with creator Ricky Gervais and future Bilbo and Dr. Watson Martin Freeman and the 1981 cult miniseries The Hitchhiker’s Guide to the Galaxy based on the comic novel by Douglas Adams.

The intimate and moving drama Starting Out in the Evening (2007, PG-13) stars Frank Langella as a once-celebrated author whose passion is rekindled by an appreciative graduate student (Lauren Ambrose) (Prime Video and Hulu).

Men with Brooms (2002, R) is an amiable underdog sports comedy from Canada about a misfit curling team that reunites to fulfill a dead man’s last request. Paul Gross and Molly Parker star (Prime Video and Hulu).

Before Melissa McCarthy became Life of the Party, Rodney Dangerfield was the parent who went Back to School (1986, PG-13) to his kid’s college (Prime Video and Hulu). Also new:

The documentary 78/52: Hitchcock’s Shower Scene (2017, not rated) looks at the impact of “Psycho” and the artistry behind the scene that shocked audiences in 1960.

The five-part documentary miniseries Being Serena (2018, not rated) follows the tennis legend as she takes on motherhood while continuing to compete. The first episode now available, new episodes every Wednesday through May.

Other new arrivals include the British drama Lady Macbeth (2017, R), based on a classic Russian novel about a young bride in a loveless marriage, and David Cronenberg’s dark Hollywood drama Maps to the Stars (2015, R) with Julianne Moore and Mia Wasikowska.

Available Saturday night is the animated adventure comedy The Lego Ninjago Movie (2017, PG) and you can stream the 2018 Rock and Roll Hall of Fame Induction Ceremony on Sunday, a day after its cable premiere.

Ken Loach’s I, Daniel Blake (2017, R), a scathing social drama and a touching portrait of compassion, won the top prize at Cannes in 2016. Reviewed on Stream On Demand here.

Also new to Showtime this month:

TCM Select Pick of the Week is A Streetcar Named Desire (1951), the Oscar-winning adaptation of Tennessee Williams’ stage hit that made a star of Marlon Brando and helped bring a new style of acting to Hollywood studios. Streaming through October 26

It launches the “Star of the Week: Marlon Brando” spotlight, which includes Julius Caesar (1953) with James Mason and John Gielgud and the Tennessee Williams adaptation The Fugitive Kind (1960) with Anna Magnani. Also new: