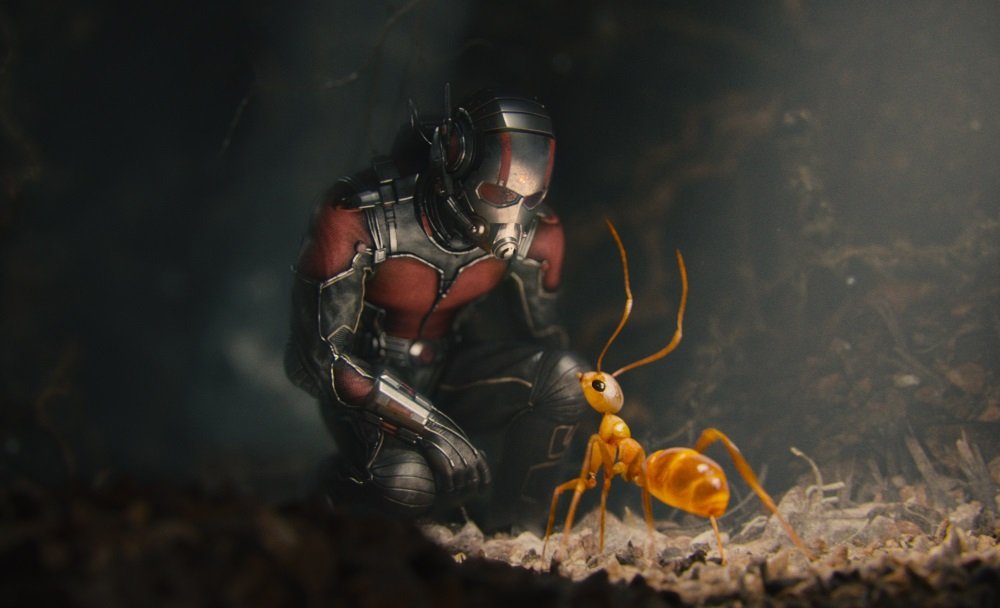 Ant-Man (2015) hit theaters with a slightly different approach for a Marvel superhero movie. It’s more playful and comic, with a reluctant hero who has a motley crew of buddies and a mentor with a sly sense of humor as well a drive for justice, and while the stakes are big (stopping a tech giant from weaponizing experimental technology and selling it to the bad guys), it’s not the world-shaking battleground of The Avengers or Thor or Iron Man movies. It’s a movie that wants to have a little more fun with the genre, and it succeeds, even if it never really veers far from an increasingly familiar conventions of the superhero movie.

Paul Rudd, an actor with a guy-next-door quality and easygoing amiability, takes the lead as Scott Lang, a self-described cat burglar as a whistle-blowing Robin Hood who steps out of prison with nothing more on his mind than to go straight and become a part of his little girl’s life. Then he’s drafted by Dr. Hank Pym (Michael Douglas), a scientist and former tech tycoon, to inherit his unique shrinking suit, which also enables him to communicate with ants.

Hank was a covert hero for decades, we discover, and he uses subterfuge like a con game to reel in Scott as his successor, a decision that his daughter Hope (Evangeline Lilly) isn’t too keen on, but she helps him train nonetheless. Corey Stoll is the calculating CEO and former protégé who bounced Hank out of the company he founded and wants to use his tech for next-generation weapons. Their plan to stop him is part comic book fantasy, part elaborate heist, featuring an oddball gang of conspirators (Michael Peña, T.I. and David Dastmalchian) and a small army of ants, who prove to be team players and quite personable once you get up close and personal.

And that’s where the film is most fun. All the Marvel movies revel in spectacle but Ant-Man shifts the perspective when Scott goes all incredible shrinking man. The film was developed by filmmaker Edgar Wright (Shaun of the Dead), who left the film over disagreements with Marvel, and Joe Cornish (Attack the Block), and the finished production includes additional contributions from Adam McKay and Rudd.

Director Peyton Reed, who takes a more whimsical attitude than you see in the usual superhero flick, straddles the line between cartoon comedy and underdog wonder in those colorful forays into the world underfoot. It gives the adventure a whole new perspective, and the energy and invention of the climactic battle, as hero and villain (and other objects) shrink and sprout at will, is a refreshingly different take on the obligatory showdown set piece.

This is a superhero film as a caper comedy adventure and that’s part of the charm. There’s a lack of bombast and epic scale, refreshing in a genre that keeps trying to top itself. Rudd is the everyman as hero, Douglas is clearly having fun as the mentor with a sense of humor, and Lilly mostly bides her time. Marvel is better than DC in sharing the screen with women heroes but it’s still mostly a boys club. That club became a little more inclusive in subsequent Marvel and DC movies.

The Disney Blu-ray release includes commentary by director Peyton Reed and actor Paul Rudd, two featurettes “Making of an Ant-Sized Heist: A How-To Guide” (14 minutes) and “Let’s Go to the Macroverse” (8 minutes), which are light and fun with lots of terrific production and special effects footage, the “WHIH NewsFront” clips of the fake newscasts, and eight deleted scenes.