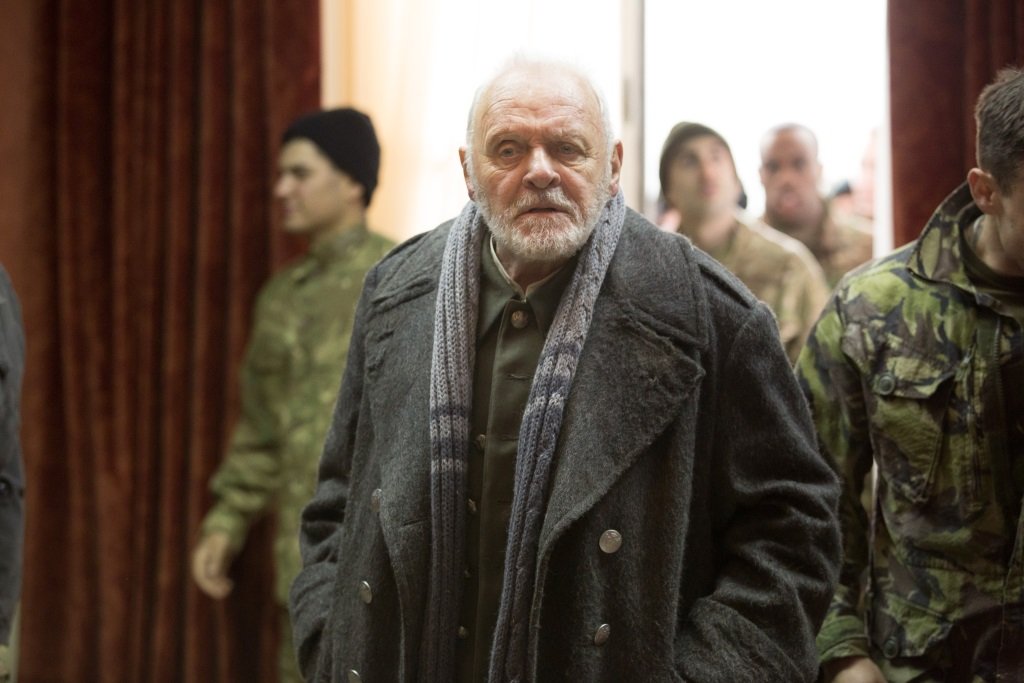 Anthony Hopkins plays King Lear in the Amazon Prime Original miniseries, which relocates the setting to a military dictatorship in contemporary England, and Emily Watson, Emma Thompson, and Florence Pugh plays his three daughters. Award winner film and stage director Richard Eyre helms this co-production with BBC. “Now 80 himself, the right age, Hopkins is at home in Lear’s skin,” writes TV critic Sam Wollaston for The Guardian. “Shouty, angry, cruel one moment; vulnerable, tender, loving the next – or at the same time. A mesmerising performance.”

Hold the Dark (2018, not rated), a mystery turned survival thriller, stars Jeffrey Wright as a tracker looking for a missing child in in the Alaskan wilderness. Riley Keough, Alexander Skarsgård, and James Badge Dale co-star. “[D]irector Jeremy Saulnier has a gift for seizing your attention with arresting, harmoniously balanced images that somehow seem to either briefly slow down or even freeze a movie,” observes The New York Times film critic Manohla Dargis. “His visual flair remains the only consistently appealing part of “Hold the Dark,” a thriller that aspires to something deeper but never figures out what…. The story is a mess, but the setting, animals and actors make for solid bait.”

It comes direct to Netflix from the Toronto International Film Festival.

Alden Ehrenreich as a young Han Solo who teams up with Chewbacca for the first time in Solo: A Star Wars Story (2018, PG-13), a prequel from a galaxy far, far away. As much galactic heist adventure as space opera, it co-stars Woody Harrelson, Thandie Newton, and Donald Glover as young Lando Calrissian, and it shows how Han won his pride and joy: The Millennium Falcon. Cable On Demand and VOD, also on DVD and at Redbox.

Classic pick: Spencer Tracy headlines the star-studded cast of It’s a Mad Mad Mad Mad World (1963, G), an epic comedy about a wacky race across America for a fortune in hidden gold. Edie Adams, Milton Berle, Sid Caesar, Buddy Hackett, Ethel Merman, Mickey Rooney, Dick Shawn, Phil Silvers, Jonathan Winters, and Terry Thomas are just a few of the mad treasure hunters, Tracy is the cop shadowing their moves, and everyone from The Three Stooges to Jimmy Durante show up in cameos. At almost three hours it’s awfully long for a comedy and director Stanley Kramer’s portrait of hysterical greed gets a bit screechy under his incessantly frantic pace, but it has a crack cast of Hollywood pros and plenty of slapstick highlights. Streaming on Prime Video.

Natalie Dormer is a blind musician in London who hears a murder in a neighboring apartment in In Darkness (2018, not rated), a thriller she wrote with director Anthony Byrne. Also new:

Johnny Depp is Captain Jack Sparrow in Pirates of the Caribbean: The Curse of the Black Pearl (2003, PG-13), the first and the best film in Disney’s high seas franchise. Reviewed on Stream on Demand.

True stories: 20 Feet From Stardom (2013, PG-13) tells the stories of back-up singers to the greatest rock and R&B acts who perform just outside of the spotlight. Also new:

Frank Langella is a retired jewel thief who goes back in action with a new partner in the delightful Robot and Frank (2012, PG-13), a crime comedy with a science fiction twist.

Michael Powell’s Age of Consent (1969, R) stars James Mason as an artist in Australia and a young Helen Mirren as his muse.

Ingrid Bergman is a governess who falls for her boss in Adam Had Four Sons (1941), a romantic drama with Warner Baxter and Susan Hayward.

The swashbuckling fantasy The 7th Voyage of Sinbad (1958) with Kerwin Mathews is a family friendly adventure with imaginative old-school special effects by Ray Harryhausen.

Cult movies: Warren Beatty is a nightclub comic who goes on the run when the mob tries to kill him in Mickey One (1965), a psychodrama from director Arthur Penn. Also new:

Matt Damon is a suburban dad with a dark side in Suburbicon (2017, R), a confused mix of social satire, crime thriller, and psychological drama from director George Clooney and screenwriters Joel and Ethan Coen (Prime Video and Hulu).

Jane Fonda in Five Acts (2018, not rated) profiles the acclaimed and often controversial actress and entrepreneur.

TCM Select Pick of the Week is The Yearling (1946) starring Gregory Peck as a frontier father raising a family (wife Jane Wyman and son Claude Jarman) in the wilderness. The tear-jerker of a story revolves around Jarman raising a small foal as a pet, which proceeds to eat the impoverished family’s crop as it grows up. Beautifully filmed by director Clarence Brown, this marvelous adaptation of the Marjorie Kinnan Rawlings novel is a gorgeous piece of MGM sentimentalism and rural innocence. Streaming through December 27

“Star of the Week: Debbie Reynolds” features a dozen films, from Three Little Words (1950), where she sings “I Wanna Be Loved by You,” and The Tender Trap (1955) with Frank Sinatra to her Oscar-nominated performance in The Unsinkable Molly Brown (1964) and The Singing Nun (1966).

A London stage production of the Broadway musical An American in Paris, recently shown in theaters in special screenings, is now streaming on BroadwayHD. Robert Fairchild and Leanne Cope star in the Tony Award-winning show.

You Kiddin’ Me?!, a prank show from Kim Kardashian West, is now streaming on Facebook Watch with new episodes on Saturdays.