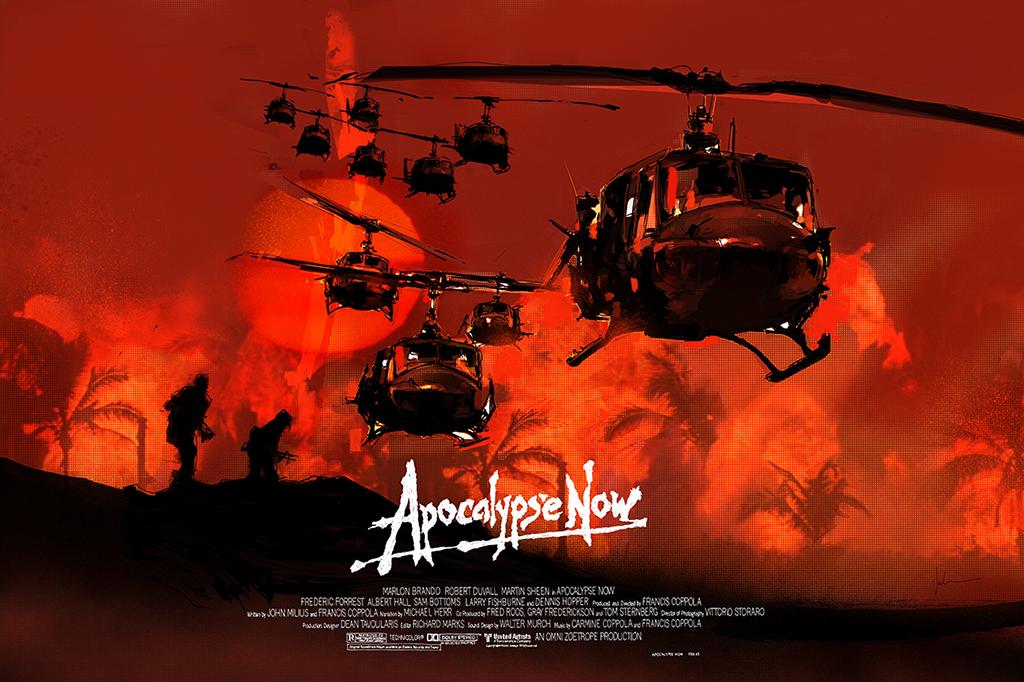 Apocalypse Now (1979) and Apocalypse Now: Redux (1979/2001) – Drawing from a script by John Milius, rewritten under the influence of Joseph Conrad’s Heart of Darkness and a production in a constant state of chaos, Francis Ford Coppola turns Vietnam into a war movie as drug-addled theme park ride: “Pirates of the South Seas” with real tigers, exploding sets, and Marlon Brando as a bald, bloated, philosophy-spouting Disney who’d as soon cut your throat as talk to you.

Martin Sheen is Captain Willard, an officer sent on a mission up river to assassinate a Colonel who went rogue and turned himself into a self-proclaimed prophet in an ancient temple, and his journey is quite a trip. Operatic, allegorical, and full of mesmerizing images, Coppola’s vivid-as-an-LSD-trip take on the madness of war is a one of a kind film, a mess-terpiece held together by sheer audacity and imagination.

Frederic Forrest, Sam Bottoms, Laurence Fishburne, and Albert Hall fill out the boat crew and Dennis Hopper is memoable as war photographer under the spell of Brando’s jungle guru warlord. You can spot Harrison Ford in a small role as an American Colonel.

The production itself was a disaster by any measure. Coppola brought his cast and crew to The Philippines for a four-month shoot that stretched on for more than a year. His original leading man abandoned the project, his new leading man had a heart attack, the location was hit by a monsoon that destroyed its sets, the production robbed, the script rewritten, and the film went wildly overbudget. Coppola struggled over the editing and kept reworking it right up to its release date. The story is vividly told in the book “Notes: The Making of Apocalypse Now” by Eleanor Coppola and the documentary Hearts of Darkness, which Coppola codirected, and it’s a compelling story in its own right.

While remastering the original theatrical version for DVD, Coppola and editor/sound designer Walter Murch were inspired to try to return to the hours of cut scenes and outtakes abd recreate some of their original vision in an expanded version. Apocalypse Now: Redux was released in 2001 as a limited theatrical special edition with over 50 minutes of new footage (including two completely new extended sequences). The famous “plantation scene” (glimpsed previously in the documentary Hearts of Darkness) is literal where the rest of the film is suggestive, but emerges from and dissolves back into the fog like a ghostly vision of the past and offers Martin Sheen’s lost soul of a Green Beret a last moment of human tenderness. Other additions include a ragged revisit with the Playboy Playmates stranded on their USO tour (handled with an inspired mix of tenderness and horniness on the part of the lonely men), an unexpectedly playful moment where Sheen steals Robert Duvall’s surfboard, and an extra scene with Brando’s Kurtz exposing the lies that the war is built on.

These additions humanize Sheen’s character, which I don’t believe serves the film. He’s more interesting as a dead man walking. And the new scenes, while interesting, come at the cost of the intensity of the original experience. But they also fill out his psychedelic odyssey with a heft and a scope befitting an epic. It’s an interesting alternate version, but I think the original is still the best.

) and other services. Availability may vary by service.
Apocalypse Now [DVD]

Both the DVD and Blu-ray editions feature commentary by Francis Ford Coppola and numerous featurettes and deleted scenes.