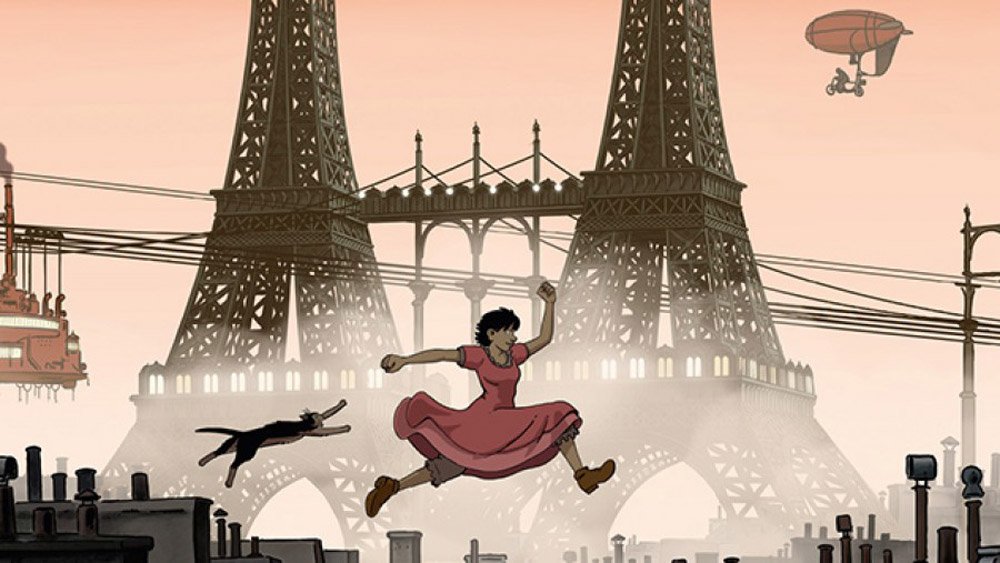 April and the Extraordinary World (France, 2015), inspired by the graphic novels of the great French comic artist Jacques Tardi, is a steampunk adventure set in an alternate reality Paris where the World Wars never occurred, electricity was never discovered, twin Eiffel Towers anchor a direct cable-car route to Berlin, and the smoke that powers the steam-based energy economy pollutes the world. It’s also a rarity in feature animation: a film made in the classic 2D hand drawn manner, with designs modeled on Tardi’s clean, strong, storybook illustration style.

History veers off course in the wake a failed 19th century experiment to create a super soldier and we rush through the domino effect that lands us in 1941 Paris. That’s where we find April, effectively orphaned after her scientist parents are captured by a mysterious organization snatching the geniuses of the world, living with her talking cat Darwin and carrying on her parents’ research in a secret hideout. There’s a teen street urchin who shadows April, a disgraced cop trying to track down April’s scientist grandfather, a militaristic government imprisoning the greatest minds to work on weapons research, and a secret underground where a new multi-species society plots a better future… maybe.

The artwork has the character of a Tintin graphic novel (Herge was an influence on Tardi) and the thick lines, simple designs, and imaginative detail give it the quality of a storybook. Imagine Oliver Twist meets Jules Verne as a whimsical fantasy fable, a film made for kids but clever and creative enough for adults. It carries messages of environmental responsibility, anti-militarism, and scientific ethics, and in its own way celebrates science and technology as a public good, but only when undertaken with that in mind. Plus, it features spy rats with goggles and giant talking lizards, so what’s not to like? Animators Christian Desmares and Franck Ekinci make their respective directorial debuts.

, iTunes, GooglePlay and/or other services. Availability may vary by service.
April and the Extraordinary World [Blu-ray]

April and the Extraordinary World [DVD]

The Blu-ray and DVD releases from Universal offer the choice of original French soundtrack (featuring the voices of Marion Cotillard, Olivier Gourmet, and Jean Rochefort) and English language version (with the voices of Paul Giamatti, J.K. Simmons, and Susan Sarandon), plus the 28-minute featurette “The Origin of The Extraordinary World” (in French with English subtitles).