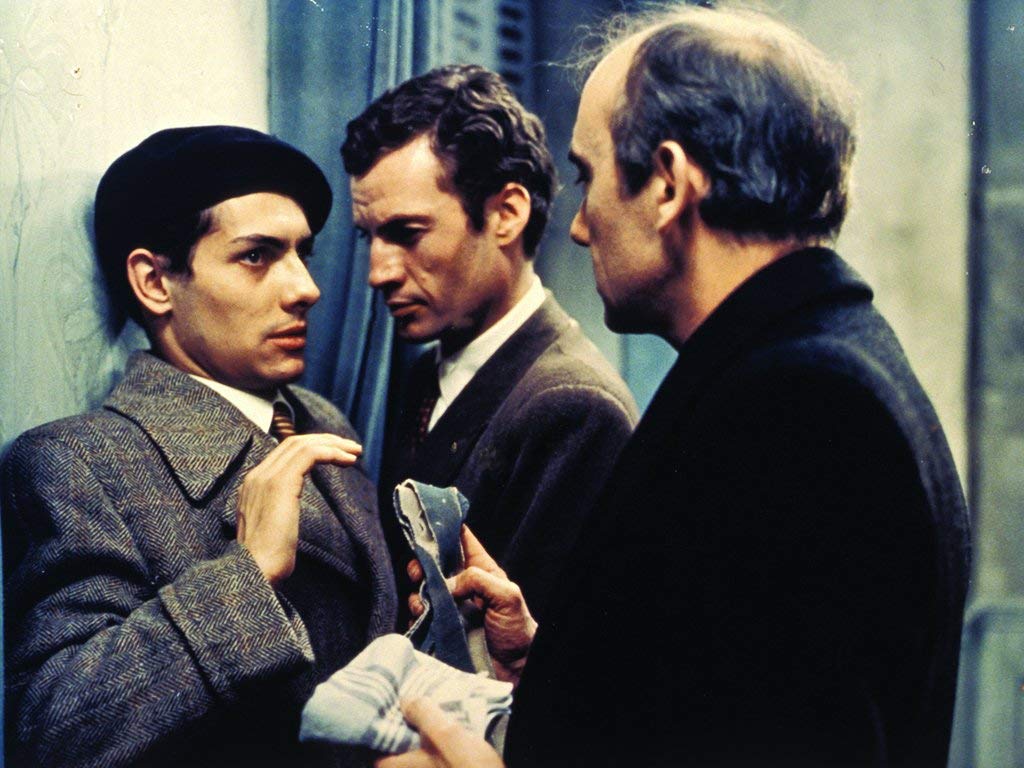 Legendary gangster movie director Jean-Pierre Melville turned his familiar crime film iconography on its head with Army of Shadows (France, 1969), his gravely personal drama about the early days of the French Resistance in World War II.

Gangster movie icon Lino Ventura plays Resistance leader Philippe Gerbier with an observant stillness and coiled calm different from any his crime thrillers. Masked only by a pair of glasses and face that betrays almost no emotion, he looks no more dangerous than the accountant next door, but behind the careful body language and deliberate action is a patient and pragmatic man as compassionate to his comrades as he is resolute with traitors. Simone Signoret is regal as his most devoted deputy, running their operations in the underworld of occupied France with understated gravitas.

The episodic, almost fractured drama follows a year in the life of Gerbier and the members of his cell beginning in the fall of 1942. This is before the tide of war had turned, when their numbers were tiny and their efforts were driven by outrage and desperation more than by hope. The film opens with a regiment of German soldiers marching past the Arc de Triomphe and down the Champs-Elysees, through the symbolic heart of Paris. It creates a chilling introduction to Melville’s take on the reality of occupied France.

The film takes us through military assignments, captures and interrogations, escape attempts (successes and failures), and the hard necessity of executing one of their own. Melville plays none of it for grand melodrama or heart-pounding action, wiping away the patriotic nostalgia and grand heroism that had previously defined the French Resistance film. Army of Shadows takes place almost completely in the cold, hazy winter light of overcast days, in sparsely populated streets, deserted countrysides, and blandly unmemorable jail cells and military offices.

If anything, the vision is more fatalistic than any of his Melville’s crime classics. But more resonant than the atmosphere of ever-present danger and death sentences hanging over them all is the feeling of isolation and loneliness that permeates every scene. The assignments may play like heists with higher stakes (the iconic trenchcoats help blur the lines), but there is none of the Bonhommie camaraderie of his gangster films, no celebrations of successful missions in a basement café, no rest from the constant surveillance of soldiers and cops making random sweeps. The romantic code of loyalty and honor becomes an unforgiving law of survival: betrayal is death and there is no reprieve. In this world, triumph is being killed in an act of mercy by your comrades rather than executed by your enemy.

, iTunes, GooglePlay and/or other services. Availability may vary by service.
Army of Shadows (The Criterion Collection) [Blu-ray]

The Criterion Blu-ray and DVD editions feature well-informed commentary by Jean-Pierre Melville historian Ginette Vincendeau, the excellent 30-minute French documentary Melville et L’Armee des Ombres, a four-minute archival TV report shot on the set of the film, interviews with cinematographer Pierre Lhomme and film editor Francoise Bonnot and other extras, plus a booklet with essays and interview excerpts with Melville.