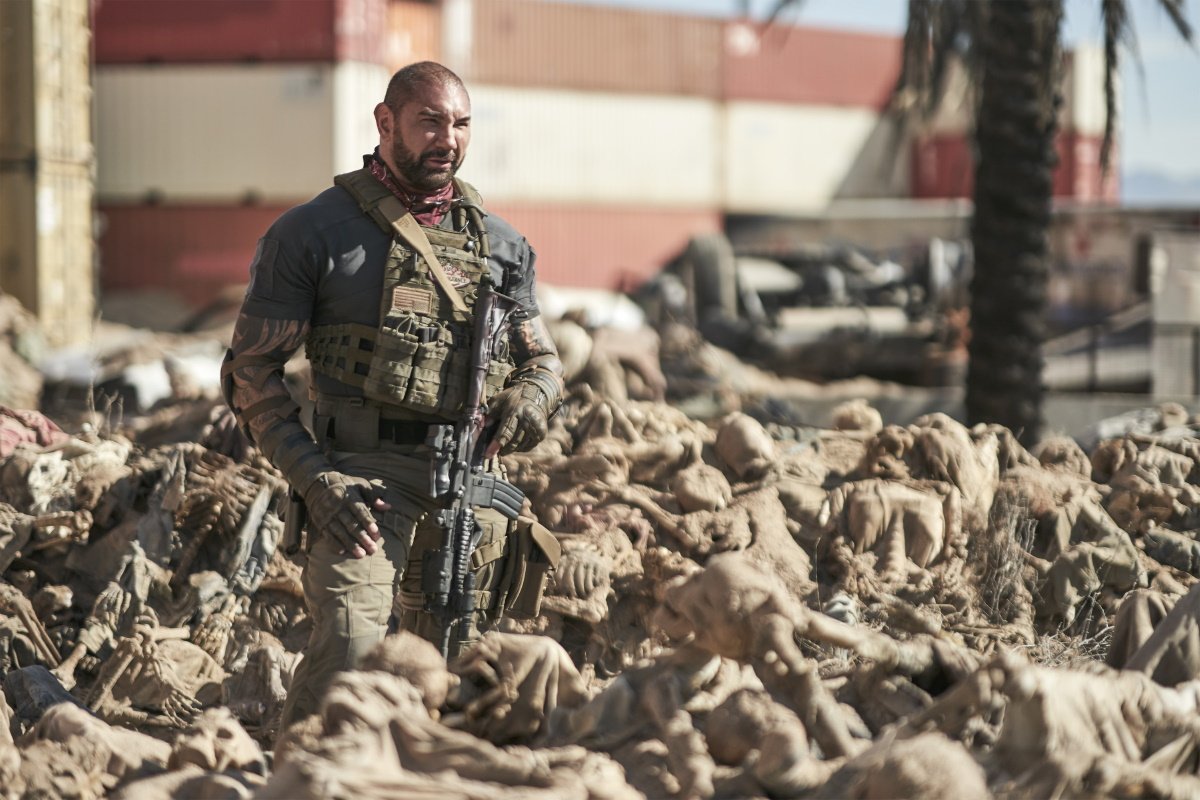 Zombie horror, heist flick, and platoon thriller come together in Zach Snyder’s “Army of the Dead” (2021, R). Dave Bautista stars as an outbreak survivor who puts together a crew to infiltrate the zombie hordes of a walled-off Las Vegas for a fortune locked away in a casino vault before the government nukes the city. Snyder goes for action and spectacle in the two-and-a-half-hour film, and tosses in a splash of humor absent from his more recent projects. Omari Hardwick, Ana de la Reguera, Matthias Schweighöfer, Tig Notaro, Garret Dillahunt, and Hiroyuki Sanada costar. The streaming debut comes one week after opening in theaters. (Netflix)

The heart wrenching drama “Supernova” (2020, R) stars Stanley Tucci and Colin Firth as longtime partners on a final road trip through Northern England as one of them succumbs to disease and dementia. It’s the third film starring the longtime friends and their rapport gives their relationship a grounded history. (Hulu)

The animated series “Marvel’s M.O.D.O.K.: Season 1” (TV-MA) pokes fun of superhero tropes and the MCU through the absurd travails of a megalomaniacal supervillain (voiced by cocreator Patton Oswalt) whose evil organization for world domination is bankrupt and personal life is crumbling. (Hulu)

The Roku Channel, a free, ad-supported streaming service available through Roku devices and interfaces, now offers 30 original shows originally produced for the short-lived Quibi service. The line-up includes the comedies “Dummy” (TV-MA) with Anna Kendrick, “Die Hart” (TV-MA) with Kevin Hart, and the “Reno 911!” (TV-MA) reboot, action thrillers “Most Dangerous Game” (TV-MA) with Chris Hemsworth and “The Fugitive” (TV-MA) with Kiefer Sutherland, and the Emmy-winning drama “#FreeRayshawn” (TV-MA) with Laurence Fishburne and Stephan James. All episodes of the shows are available to stream. Roku plans to release another 45 shows (some never before available) by the end of the year. (The Roku Channel)

“Four Good Days” (2021, R) stars Mila Kunis as a young woman gripped by heroin addiction and Glenn Close as her mother who agrees to help her fight her demons. Rodrigo García directs the based-on-a-true-story drama.

“The Dry” (2021, not rated), a murder mystery starring Eric Bana investigating an unsolved death in the drought-parched outback, was the opening night film of the virtual SIFF 2021 and is one of the top grossing Australian films of all-time.

The documentary “Amy Tan: Unintended Memoir” (2021, TV-14), originally made for the PBS showcase “American Masters,” looks back on the life and career of the bestselling author.

A street magician puts his skills to use taking on neighborhood gangs in the streetwise indie drama “Sleight” (2016, R).

“P!nk: All I Know So Far” (2021, not rated), a mix of behind-the-scenes documentary and concert film, follows the performer in her 2019 “Beautiful Trauma” world tour.

The new nonfiction limited series “Pride” (TV-MA) chronicles the struggle for LGBTQ+ civil rights in America from the 1950s through the 2000s. Three episodes available, new episodes on Saturdays.

“Cowboys” (2020, not rated) stars Steve Zahn as a troubled but well-intentioned father who runs off with his trans son (Sasha Knight) when his recently-separated wife refuses to let him live as his authentic self.

Dev Patel stars in “The Personal History of David Copperfield” (2019, PG), Armando Iannucci’s jaunty, energetic adaptation of the sprawling Charles Dickens classic about an orphan whose spirit helps him triumph over adversity.

Two limited series documentaries debut on Apple TV+. “1971: The Year That Music Changed” (TV-MA) explores how the cultural and political climate influenced the music that came out in 1971 from such artists as The Rolling Stones, Aretha Franklin, Bob Marley, Marvin Gaye, The Who, Joni Mitchell, and Lou Reed. Academy Award winning filmmaker Asif Kapadia directs all eight episodes.

“The Me You Can’t See” (TV-MA), from producers and participants Oprah Winfrey and Prince Harry, takes on mental health with frank discussion aimed at breaking through the stigma of discussing mental illness.

The limited series “Death and Nightingales” (TV-MA), based on the novel by Eugene McCabe, is a tale of love, betrayal, deception and revenge in 19th century Ireland, starring Matthew Rhys, Ann Skelly, and Jamie Dornan.

The “2021 Eurovision Song Contest” streams live and on demand this week; the grand final will be live at 3am Saturday morning.

“From Cradle to Stage: Season 1” (TV-MA) from Dave Grohl spotlights a different performer (among them Pharrell Williams, Miranda Lambert, and Brandi Carlile) and his/her mother in each episode. New episodes each Monday.

Emily Watson plays a forensic psychiatrist who falls under the spell of an accused killer in the psychological thriller limited series “Too Close” (not rated).

A wealthy New Zealand couple stop at nothing to have a baby in the limited series psychological thriller “The Nest” (2020, R) starring Sophie Rundle and Martin Compston. (Sundance Now / AMC+)

“Directed by Lois Weber” spotlights the too-long overlooked work of the pioneering American filmmaker with three of her best features: “The Dumb Girl of Portici” (1916), the first epic directed by a woman, and the powerful social dramas “Shoes” (1916) and “The Blot” (1921). And don’t miss the short film “Suspense” (1913), an inventive thriller featuring innovative techniques picked up by generations of filmmakers. All film silent with a music score. More films celebrating women in cinema: