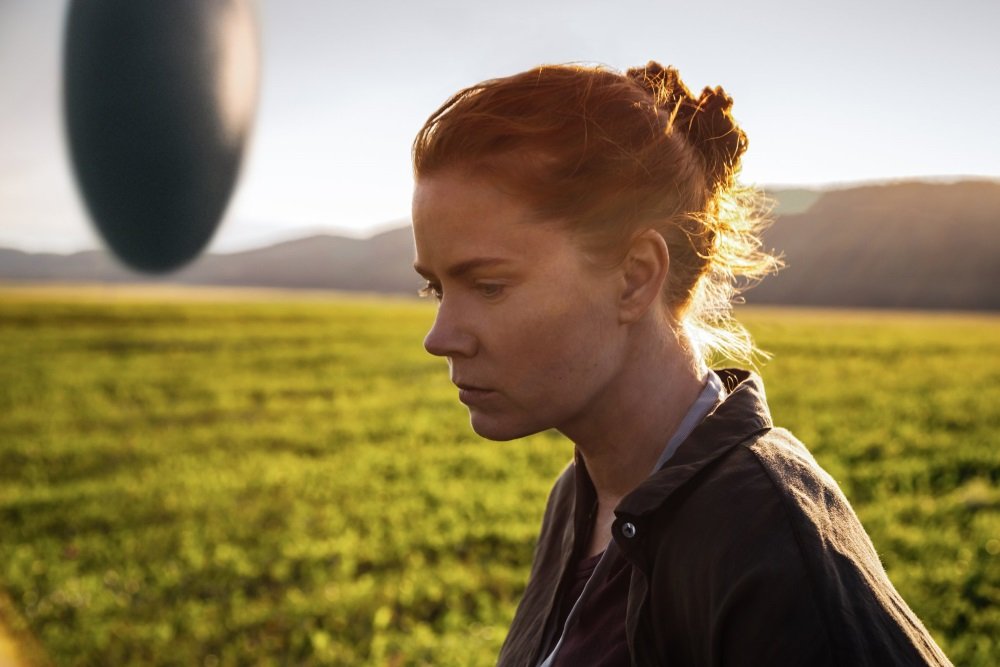 Arrival (2016) is the most cerebral of first contact films, a science fiction drama about communicating across cultures and across species and even across time without a common language, while failing to communicate within our own world. It is a film that looks out beyond our galaxy and inward to our own souls, to challenge our own expectations of what intelligent life outside of our universe might be like and what they may want with us.

The aliens arrive on Earth (or, more accurately, hover just above it) in twelve smooth, featureless ships that look like they been carved out of rock. They are Stanley Kubrick monoliths smoothed into gray parabolic stones like halved almonds, hundreds of feet high hanging in space, not exactly threatening though not particularly welcoming. Amy Adams is Dr. Louise Banks, a linguist recruited by the military (Forest Whitaker conducts the job interview) to try to make sense of the sounds and symbols offered by the seven-armed creatures they call heptopods. She and theoretical physicist Ian Donnelly (Jeremy Renner) create a cultural exchange, teaching them the building blocks of human communication while they analyze the odd noises and impenetrable inkblot circles the heptopods spurt into the air like squids turning ink into abstract art.

Time is as fluid as it is imperceptible. The film slips back and forth through flashbacks while Louise and Ian meet the aliens (a duo they nickname Abbott and Costello) daily and puzzle out their research with minds across the globe through teleconferencing, until the screens go dark as one country after another breaks off communication and contemplate first strike. Since we can’t understand what they want, the default assumption is invasion. This is a process that goes on for months but feels like it’s compressed into a few days.

It’s a drama on a global scale built on the quiet contemplation of the introspective, intent, emotionally focused Louise. Is this the result of losing a child, as the flashbacks suggest? Nothing is quite that simple. The script, adapted and expanded from Ted Chiang’s short story “Story of Your Life” by Eric Heisserer, is built on some pretty cerebral concepts involving language and time, and how our understanding of one informs our relation to the other.

But it’s also a very human story about choices and consequences and blame and acceptance, from the global collapse of a united effort at a peaceful meeting of mind to the personal lives of Louise and Ian, who grow close in their shared effort. Director Denis Villeneuve directs with a mix of awe and anxiety that cinematographer Bradford Young paints on the screen with an unusually subdued, suppressed style: the fantastic and the mundane meeting in hushed, serene scenes, as if seeing it all in retrospect from the informed consciousness of Louise. Which is just may be.

Nominated for eight Academy Awards, including Best Picture, Director, Adapted Screenplay, and Cinematography, and it won for sound editing. Amy Adams’s sublime performance is sadly overlooked by the Academy but was nominated for both a Golden Globe and a Screen Actor’s Guild Award.

, iTunes, GooglePlay, and other services. Availability may vary by service.
Arrival [DVD]

The Blu-ray has a superb picture that preserves the muted colors and understated palette, a very different look than the usual bright, colorful science fiction picture, and a 7.1 DTS-HD soundtrack. It includes the 30-minute making-of featurette “Xenolinguistics: Understanding Arrival” and shorter but substantial production featurettes on the sound design, the moody, layered score by Jóhann Jóhannsson, and the editing (each a little over 10 minutes) and the 15-minute “Principles of Time, Memory, & Language” which explores the concepts and philosophy behind the film’s heady idea. Also features a Digital HD copy of the film. The 4K Ultra HD release features all the supplements and a bonus Blu-ray copy of the film.