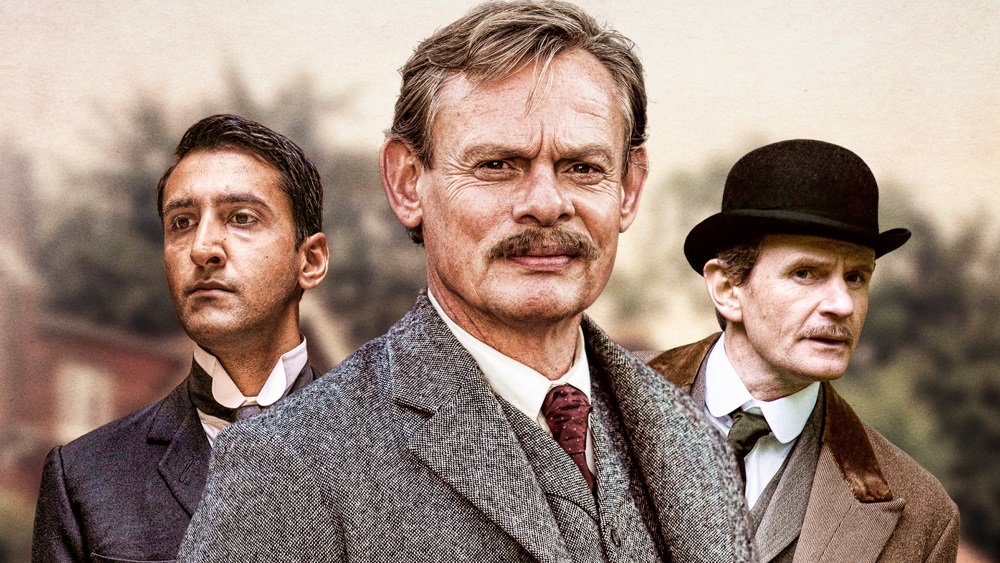 Arthur & George (2015), a three-part BBC drama adapted from the novel by Julian Barnes, begins with the claim: “The following is based on true events.” Which is true up to a point.

Barnes’ novel is a work of dramatic fiction based on real-life involvement of Arthur Conan Doyle, the creator of Sherlock Holmes and a major British celebrity at the turn of the century, in the case of George Edalji, the son of an East Indian father and a Scottish mother living in rural England, who was convicted for string of livestock mutilations in 1903 and served three years in prison. He wrote to Doyle asking for help in clearing his name and reputation and Doyle, whose wife had recently passed away, took the case in part to escape his grief and his guilt.

The series reworks the documentary details of the campaign and the character portrait of the novel into a classic British mystery, with Martin Clunes playing the widower Doyle as a man inspired to play detective in a real-life case. His secretary Alfred “Woody” Wood (Charles Edwards, who played Doyle in the Murder Rooms series a decade ago) serves as his skeptical Watson. The story of Edalji (Arsher Ali) and his family is sidelined to focus on the investigation.

Fans of the novel may be disappointed that this adaptation discards much of the character study and social portrait of prejudice in Britain and the script takes major liberties with the real-life case. But fans of the ever expanding universe of Holmes-inspired fiction should enjoy the way the show contrasts the author with his creation, which is a favorite criticism that the local constabulary lob to disparage his efforts, and creates a warm, affectionate relationship between Doyle and Wood that suggests the Holmes / Watson dynamic while going its own way with it. It’s a murder mystery and an exploration of racism, but the themes are handled respectfully