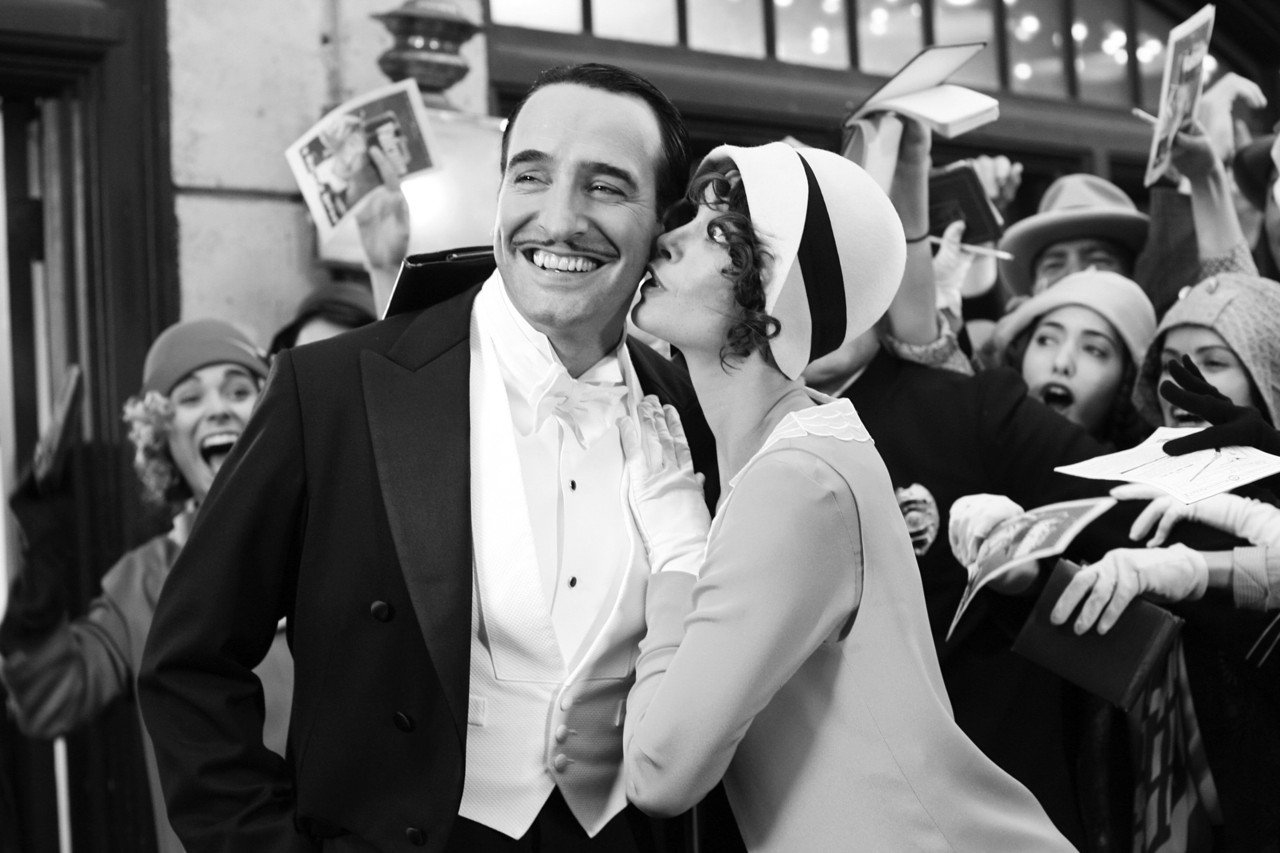 The Artist (2011) is a valentine to silent movies. You’ve likely heard that before and it’s true, but it’s more than that. A modern movie in a classical mode, shot in glorious black and white without spoken dialogue (but filled with music and sound) and directed with a lively spirit of romance and adventure and joy, it is a celebration of the dreams and fantasies and magic of the movies of every age.

Embraced by film critics and audiences all over the country, it generated a renewed interest in silent movies and it charmed Hollywood, earning ten Academy Award nominations and earning five statuettes, including best picture, best director (Michel Hazanavicius), and best actor (Jean Dujardin). Not bad for a foreign film shot on location in Hollywood with French stars, American co-stars, and a charismatic pooch who almost steals the film.

Let’s just be clear about one thing: The Artist is not an attempt to recreate the art of silent cinema at its height. It does not have the richness or ambition of Sunrise or Metropolis or The Crowd or The Gold Rush, and it doesn’t pretend otherwise. It is an appreciation of silent cinema from a director who quite deftly incorporates the flavor of silent moviemaking, with its physically expressive acting, longer shots, and more patient editing rhythms, with a more modern sensibility for contemporary audiences. And it is a delight.

Jean Dujardin plays George Valentin, a swashbuckling silent superstar with a name that evokes Rudolph Valentino and a screen persona modeled on Douglas Fairbanks, who is trying to hold on to his silent movie identity as sound upends Hollywood. It’s kind of Singing in the Rain by way of A Star Is Born, with the charming Bérénice Bejo (playing a young hopeful appropriately named Peppy) as the starlet on the way up who falls in love with the venerated actor left behind in the sound revolution. John Goodman plays the head of the studio, and Missi Pyle, James Cromwell, Penelope Ann Miller, and Malcolm McDowell co-star.

The story is familiar but the filmmaking finds new life in the old chestnut and the play with silent movie conventions is both clever and evocative. The very first intertitle is a promise of things to come: “You can’t make me talk,” reads the panel as the hero of a spy movie is tortured for information. In a later scene, Bejo’s fantasy romance played out with an empty suit and a little imagination evokes the grace of silent comedy, at once inventive and poignant. It’s merely an aside, but it showcases the delights to be found throughout the film.

Along with the five Oscars, it won two awards at the Cannes Film Festival, including the Palm Dog for the canine performer Uggie, and six Cesar Awards in France, including best film, best director, and best actress for Bérénice Bejo.

, iTunes, GooglePlay, Fandango, Vudu and/or other services. Availability may vary by service.
The Artist [Blu-ray]

On Blu-ray and DVD, both filled with supplements. The 22-minute featurette “The Artist: The Making of An American Romance” is your usual overview, filled with interviews and film clips and plenty of praise for all involved. The “Q&A With the Filmmaker and the Cast” makes a good companion piece to the featurette. Conducted at a Los Angeles screening of the film, the onstage discussion with director Hazanavicius and stars Dujardin, Bejo, Missi Pyle, and James Cromwell, moderated by radio host Matt Holzman, runs a lively 45 minutes.

Much shorter are “Hollywood as a Character: The Locations of The Artist,” a five-minute tour of the film’s most distinctive Los Angeles locations, and “The Artisans Behind The Artist,” with which offers brief looks into costumes, music, production design and cinematography. Both Blu-ray and DVD also include an Ultraviolet digital copy, for download and instant streaming.